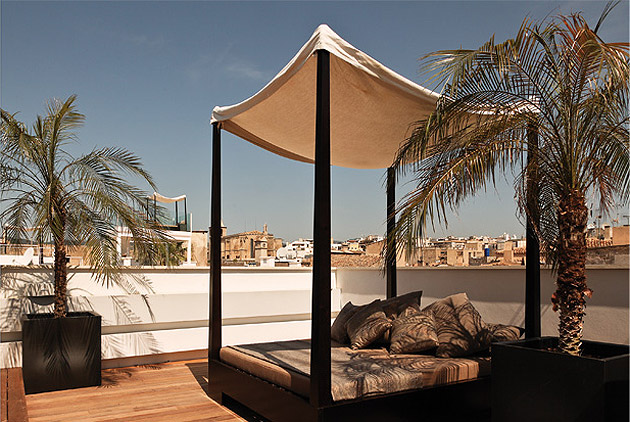 Complementing the most current couture with one-of-a-kind vintage pieces is well-established in the world of fashion. Hotels have followed suit by transforming historical houses into contemporary abodes, a harmonious blend of old and new for a truly unique escape. Design Hotels™ presents four properties in Italy, Spain and France, where guests will be exposed to an unrivalled combination of historic buildings and modern interiors.

Hotel Único Madrid is housed behind the elegant façade of a 19th century mansion in the upscale district of Salamanca. The interior boasts pieces by iconic contemporary designers and a two Michelin-starred restaurant run by Ramón Freixa. In the GombitHotel in Bergamo, contemporary minimalism meets medieval allure in a 13th century building and the watchtower “Torre del Gombito”. La Monnaie Art & Spa Hotel located in the port city of La Rochelle combines 17th century French charm with contemporary art, photography and design, much of it from the private collection of the owners Sylvette and Pascal Lebeau. Puro Oasis Urbano combines urban cosmopolitanism and Mallorcan exoticism within the walls of two historical city palaces in the heart of Palma de Mallorca. Here, the laid-back elegance is enhanced by inviting courtyards and rooftops.

Hidden within a handsome white façade, Hotel Único Madrid, located in the heart of the capital, is perfectly situated to experience art, culture and go shopping. The building’s heritage and original glamour can be seen in the marble-mosaic floor in the lobby, the high ceilings and large windows. A modern sculpture by artist Jacinto Moros is the centrepiece of the spiral staircase, cascading down the middle in streams of crimson. The contemporary décor, including designs by Jaime Hayon and Miguel Mila, neutral, warm tones and high-quality textiles like silk, linen and velvet confirm the seamless blend of modern and classical design, as envisioned by interior designer Maria José Cabre. The hotel’s garden, furnished by Patricia Urquiola, is an attractive sanctuary for hotel guests, adorned with fresh jasmine, ivy and lavender plants.

The GombitHotel is the first design hotel in Bergamo’s historic centre. Its medieval structure, built in the 13th century, is seen throughout the entirety of the hotel after careful restoration. The original stone walls and wooden beams construct the perfect stage for the contemporary furnishings selected by designer Gio Pozzi. The colours of the interiors, from light brown to grey, combined with flamboyant accents of red bookshelves and chairs, contrast perfectly with the ubiquitous history of the building. Exhibitions by local artists change regularly, adding visual interest to the hotel. Pieces by Bergamo-based artist Steven Cavagna are part of the hotel’s permanent collection and integral to the design of the guestrooms, as well as in the Tower Lounge. Here, local specialties are served for breakfast amidst the perfect simplicitiy of white furnishings dressed with natural linens.

La Monnaie Art & Spa Hotel, housed in a building from 1656, lies in the historical centre of the picturesque harbour of La Rochelle. Architect and interior designer Philippe Lucazeau’s design concept was to combine the historic elements of the building with modern furnishings and contemporary art. The white-washed stone walls contrast with spots of colour, such as turquoise suede armchairs in the hotel lobby. The owners Sylvette and Pascal Lebeau are avid art collectors, reflected in the photographs, paintings and sculptures seen throughout the hotel from artists like Hélène Jousse, Nicolas Benedetti or Liz Bono. New exhibitions are regularly on display in cooperation with the Albane Gallery in Nantes.

Puro Oasis Urbano is located in the La Lonja district of the ancient port city of Palma de Mallorca, which is defined by its architectural mixture of gothic and renaissance styles. The former 18th century city palace transformed into a modern hotel, opened its doors in 2004. The hotel was refurbished and expanded again in 2010, and in 2011, the Private Wing was opened with an exclusive rooftop terrace, which can be used for private parties, weddings, business meetings, or cocktail events. The entire hotel combines Mallorcan design elements, such as mosaic floors and high ceilings, with cosmopolitan style through contemporary art, smart leather furniture and earth-tone fabrics, used to offset the pure white setting. Artwork from renowned artists like Peter Gröndahl, David Feucht, and Kim Steeb are carefully placed throughout the hotel.