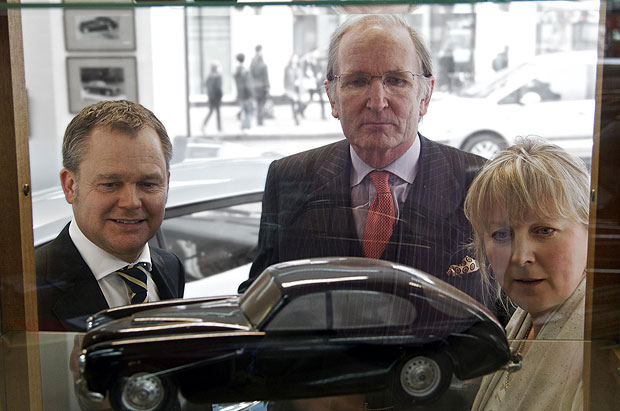 As well as taking on a new General Manager, Kensington-based Bristol Cars has gone back to its roots by signing up Sir George White, Bt, FSA, son of the man who founded the Bristol Car Company in 1945.

Sir George White, Bt, FSA, whose late father was founding managing director of Bristol Cars, will act as Chairman of the firm’s Advisory Board. Part of his role will be to help the marque’s new owners, Frazer-Nash Research, as it works on designs for a luxury, high-performance range-extender Bristol.

Sir George, whose great grandfather founded the Bristol Aeroplane Company from which the car company stems, will also work closely alongside Julian Ramshaw, who joins Bristol Cars as General Manager from the Sytner Group, where he was Business Manager.

Based at the marque’s iconic Kensington showroom, Mr Ramshaw will focus initially on revitalising the sales and servicing divisions, in which there has been much investment following the takeover by Frazer-Nash in April 2011.

Mr Ramshaw said he was looking forward to the new role and has been “excited and inspired” by the messages of support from Bristol owners and enthusiasts.

“Bristol Cars has a bright future ahead of it and I feel incredibly excited and privileged to be a part of the plans. There are some challenges ahead but we have a strong and loyal team and I feel confident that with the additional energy and ideas Frazer Nash bring, and my experience with brands like Ferrari and Maserati, we can put Bristol back where it belongs,” he said.

“While a sensitive refurbishment of the Kensington showroom is imminent, and I am busy working with Frazer-Nash and Sir George to draw up a business plan for the company, one of my priorities at the moment is to regularise and improve the manufacture and supply of spare parts. A substantial amount of money is being invested in our service division, which is still managed by Brian Marelli after more than fifty years, and Brian and his team are busier than they have ever been.”

Meanwhile Sir George, who is Patron of the Bristol Owners Club and BOC Trust, will be joined as a consultant on Bristol’s Advisory Board by Lady White, a successful artist and designer. Already the pair have helped to shape designs for a new showroom.

“The revival of a famous company after it has passed through the hands of the administrators is never an easy task,” said Sir George. “As far as Bristol Cars is concerned, the challenge has fallen into two halves. The first is to design and manufacture a new car, capable of equalling the quality and exceeding the performance of the cars that built the marque’s reputation. Giant steps are being made in this respect, but naturally in great secrecy. The second is to preserve Bristol’s glorious past. My role, and that of my wife Joanna, will be to assist in every way possible in exploiting the company’s history for the benefit of its uniquely exciting future.”