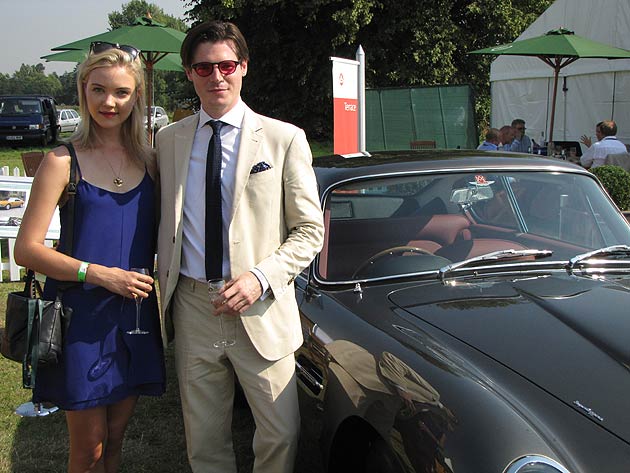 Earlier this month, the 8th Luxury Super Car Show and Concours D ‘Elegance was held at London’s Syon House west of central London, on the banks of the River Thames.

Situated in the beautiful and historic grounds of Syon Park, the two events took place for the third time at the spectacular London home of the Duke of Northumberland.

This year saw a number of new features including the Hyper Car Collection featuring a group of the world’s leading hyper cars, the Concepts & Prototypes Class and the inaugural Royal College of Art ‘Concours of the Future’ exhibition, a collection of very futuristic designs from 11 finalists. All a far cry from the gorgeous and stately 1920s Rolls-Royce, Bugattis and Bentleys of the Concours D ‘Elegance which sat on the lawns outside. Of particular interest to Luxurious Magazine this year was the introduction of the hyper cars, with entries lined up on the lawn at the front of Syon House which included models from Exagon, Koenigsegg, Pagani Automobili and RUF. 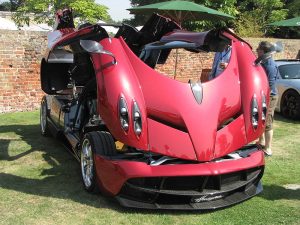 Pagani Automobili presented the Transformer-like Pagani Huayra at this year’s Salon Privé. The Huayra was launched in 2011 and won the three most prestigious European Car Of The Year Awards in 2012. In addition, ‘The Stig’, BBC Top Gear’s mysterious racing driver, lapped the famous Top Gear Test Track in an astonishing time of 1:13.8, making the Pagani Huayra the fastest road car ever to appear on the BBC TV show.

The Koenigsegg Agera R is manufactured in Angelholm in southern Sweden and is one of the world’s fastest road-going hyper cars with a top speed of approximately 273 mph. The Agera R recently broke the world record for the fastest accelerating and decelerating car, achieving 0-300-0 km/h in just 21.19 seconds. It is the only roadster hyper car with a detachable and stowable hardtop, offering the best of both worlds in addition to 120 litres of luggage space making it a usable ‘everyday’ car. 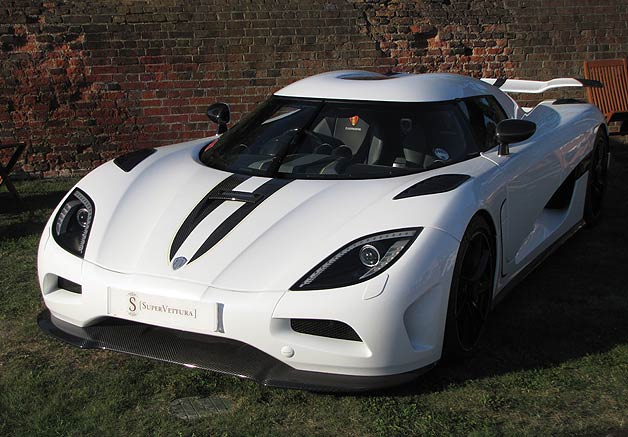 RUF Automobile GmbH is world renowned for the manufacture of some of the fastest and most exciting cars including the 777 hp mid-engined CTR3 which they displayed at this year’s event. It is the latest generation of the legendary ‘Yellowbird’ and is capable of 236 mph offering near Bugatti Veyron performance at around one-third of the cost, while at the same time displaying trademark RUF drivability, reliability and longevity. The original ‘Yellowbird’ is said to run just as well today as it did when new in 1987 highlighting its build quality. RUF has been considered a manufacturer in their own right by the German government since 1981 with their facility in Pfaffenhausen, near Munich so it would be incorrect to call them RUF Porsches. Production is split between Germany and the grand prix facilities in Bahrain. 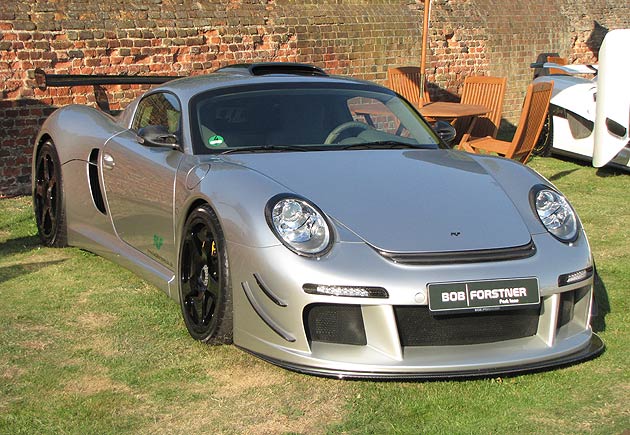 RUF was founded in 1939 just eight years after Porsche as a petrol and service station, later expanding into a bus building operation. The association between RUF and Porsche began in 1963 with the first modified Porsche 911 emerging in 1975. They have been busily taking excellent Porsches and making them even better ever since, as well as servicing Porsches and restoring classic Porsches to award-winning standards.

This is the first RUF to have a noticeably different look to a production Porsche 911, particularly at the front which bears a passing resemblance to a Porsche 911 GT3 RS, some components of which are incorporated. It also has a bespoke rear tubular spaceframe, made in conjunction with Canadian firm, Multimatic. Tying it all together is a new mostly carbon fibre body design by Bennett Soderberg.

The RUF is probably the most usable of the hyper cars displayed at Salon Prive as an ‘everyday’ car. A front-end lift ensures that the car will clear speed humps and other obstructions. The mid-engine design gives exceptional balance and agility and the longer wheelbase provides increased stability at higher speeds.

With the exception of the doors, bonnet and lights which are Porsche, the body shell, made of Kevlar-carbon composite, is completely new. The cabin is protected by a full safety cage.

The RUF redesign has lost the rear window but the body shape and a rear view camera make the RUF relatively easy to reverse. Compared to other hyper cars, the CTR3 is built to be used and enjoyed regularly as a practical car, without requiring skilled mechanics back at base. The suspension has even been specially designed enabling the driver to make simple adjustments to the ride.