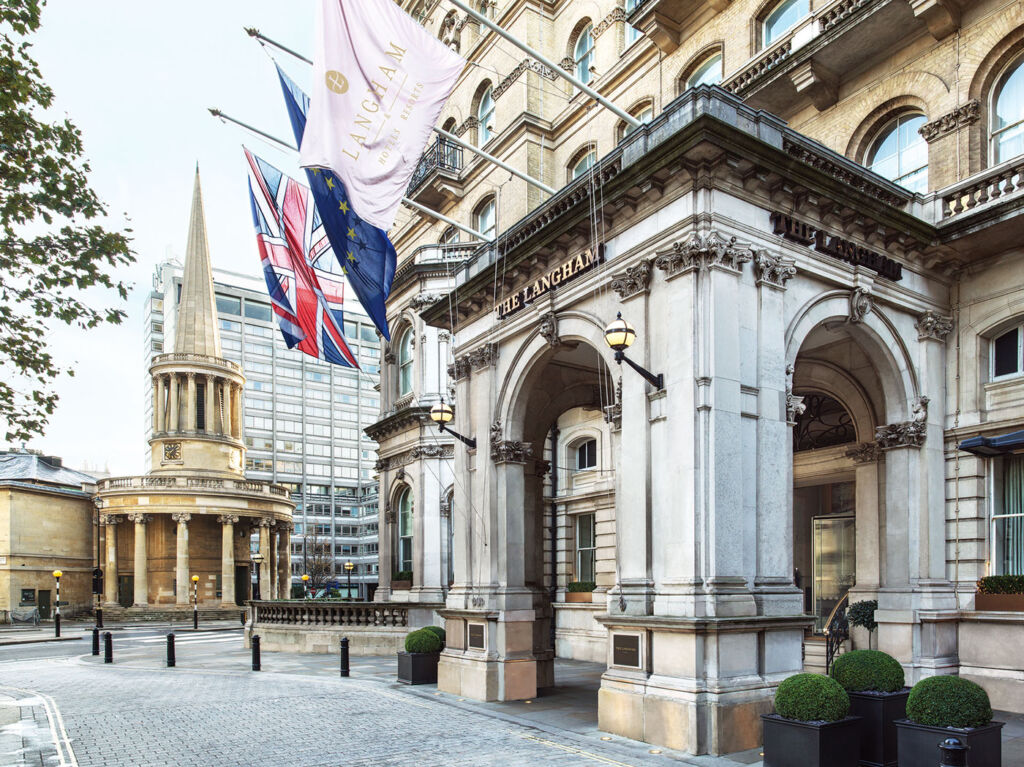 Online Editor, Simon Wittenberg, returns to bask in the luxurious surroundings of Europe’s first “Grand Hotel” which has stood in the same location since 10th June 1865.

The five-star, 380-bedroom Langham, London, sits a stone’s throw away from Oxford Street, one of the Capital’s busiest shopping thoroughfares. We reviewed this beautiful and iconic hotel four years ago, and shortly after we visited, it was subject to an extensive refurbishment programme which was completed in July 2015 in time to celebrate the property’s 150th anniversary. The £7.5 million investment saw the renovation of 47 rooms in the Regent wing (formerly known as the Club wing), the creation of the 450 square metre, £25,000-a-night, Sterling Suite, and the Langham Club Lounge, as well as the construction of two link bridges between the Lounge and main hotel building.

Apart from the aforementioned suite, there are various classifications of accommodation on offer at The Langham, which span the entry-level Superior Room, through to the one-bedroom residence which features its own kitchen and free-flowing champagne, and the Terrace Suite, a 220 square metre apartment costing from £1,167 per night. We stayed in a 32 square metre (344 square foot) Deluxe Room which was quoted at £600 (excluding breakfast) for the September Saturday night that we visited based on two adult occupants.

Guest Relations will contact you in advance of your arrival so that they can fulfil any special requests of which we had one – a combination of firm and soft pillows so that the sleeping arrangement was home from home, and sure enough, they were present and correct.

Our Deluxe Room on the sixth floor featured a king-sized bed dressed in crisp white linen, as well as a comfy chaise longue which sat opposite the 32-inch flatscreen TV. A writing desk and minibar with a full tea set completed the amenities. The ensuite dark marble-clad bathroom was spacious and the standalone shower and separate bath were lined with nicely-scented accessories from Chuan, a brand which runs throughout the hotel. This includes the Chuan Health Club which features a 16-metre swimming pool where we put in a few lengths before relaxing in the steam room. We were however sad to learn that the Jacuzzi was no more.

In terms of dining at The Langham, the 130-cover Roux at the Landau, which is a partnership with the renowned chef, Michel Roux Jr., is the main eatery if staying on site in the evening. It re-opened in April this year with a refreshed interior and a new menu created using classic French cooking techniques. Dietary requirements are very well catered for and dishes will be adapted wherever possible to suit individual tastes and intolerances. There’s a choice of the à la carte or the six-course tasting menu which is priced at £75 per person excluding wine.

The Roux dining concept is a clever business model as the eatery now opens earlier (at 5pm) to cater for the pre-theatre goers which means that it is unusually busy at 7pm, when normally at this time, you would expect the first arrivals. You then get the regular dinner crowd before it fills up again later in the evening with those who wish to have a bite to eat after a West End show as there are further offers to cater for them too.

Propped up by cushions, we were seated by chance on the same curved leather banquette where we sat in 2014, looking out on to the 19th century, circular All Souls Church. The restaurant is dimly lit, and therefore every table has its own battery-operated lamp to light your gastronomical feast. To kick off proceedings, we were treated to some amuse-bouches of melted cheese puffs and a spicy tomato aubergine ratatouille-type recipe on a rice cracker, plus some crunchy warm white bread served with a cone of salted butter and flavoursome olive oil. This was accompanied by complementary glasses of Perrier-Jouët champagne, a gentle way to start the evening.

The menu at Roux is relatively short, but there is still plenty to tantalise the taste buds. In the middle of this eatery, the chefs prepare the cold starters in full view of guests, which include Carlingford Lough rock oysters, seared foie gras, rabbit and pig’s trotters on toast, and Creel-caught langoustines. For my opening course, and priced at a reasonable £10, I headed for creamy Burratini from La Latteria on which lay red and green chicory leaves, sliced purple figs originating from the Solliès region in the south of France, and a spot of crumble. It was cleverly put together so that the different flavours didn’t overpower one another. Once you broke into the mozzarella outer shell, the Stracciatella and cream just oozed out to mix with the raspberry coulis and spots of vinaigrette, and for sweet and savoury to ultimately combine. It was nothing short of exquisite, and every mouthful was a joy for the senses. My other half opted for the delicately composed hen’s egg with shavings of smoked duck (£12), and this was equally as impressive. So far, so good.

Come to the mains, and there is a decent choice of options, ranging from Cornish cod to roast French quail. I decided on the fillet of deliciously-moist wild sea bass (priced at £36) which was perched on a celeriac purée and a generous portion of creamy sauce made with Noilly Prat, a brand of vermouth from France. Within this, there were girolles (a small variety of mushroom) to finish off what was probably one of the best fish dishes that I have ever had. My dining partner went for the Buccleuch beef fillet (£38), which came with ceps, bone marrow croquette and a less voluminous Bercy sauce, but was nevertheless tasty. A soft and smooth side of mashed potato, as well as some steamed spinach also arrived with our mains, a surprise addition, as there was no sign of these on the menu.

Dessert is always a tough choice, and you can choose three varieties of cheese from the restaurant’s sizeable custom-made cabinet, or you can go for the sweet option like I did.

There are hazelnut praline sorbet and vanilla infused cheesecake, to name just two dishes, but it was the Grand Marnier soufflé with muscovado and orange ice cream (£9) that caught my eye. Served hot in a ceramic pot, it comes with a nice thin crust, and when pierced with your spoon, it reveals a custard-type sponge which can then be joined with some cool orange ice cream. A success it was, and some meringue, sorbet and raspberries was conjured up by the chef for my wife’s dairy-free alternative.

After a nicely paced meal over a period of around two and a half hours, and one last surprise of shards of different flavoured chocolate, it was time to retire to the Artesian Bar for some post-dinner cocktails, before returning to our room for a good night’s rest and to reflect on what had been a very memorable evening with exemplary service throughout. 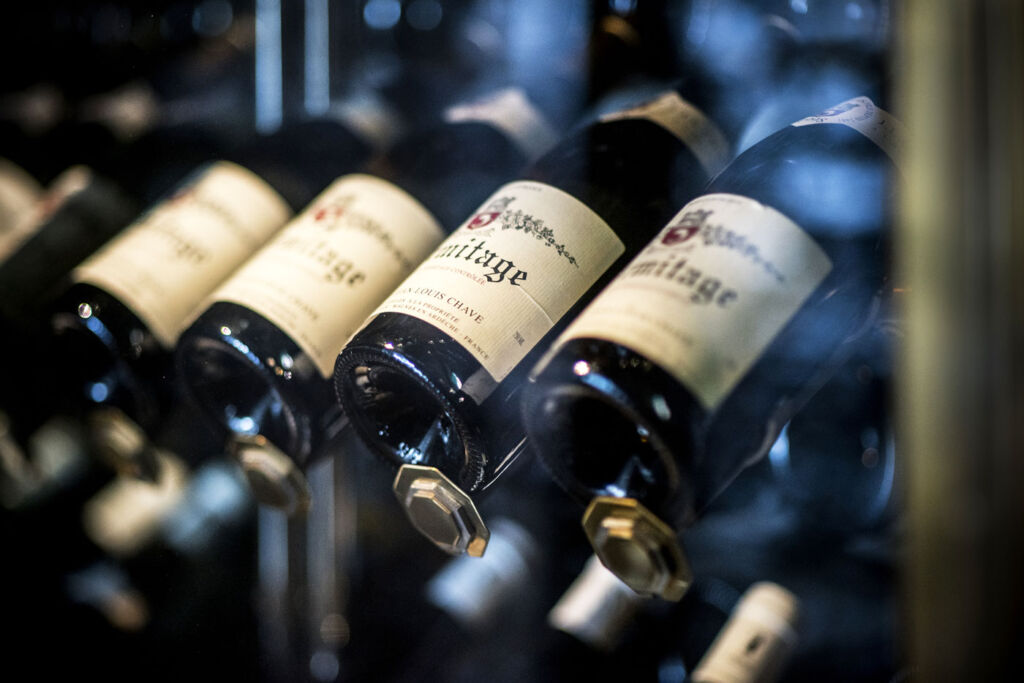 To kick-off the following day’s proceedings, breakfast is served both at Palm Court (famed as the birthplace of the afternoon tea tradition which we tried back in 2015) and Roux at the Landau, and in your room itself. It is a buffet format at Palm and an à la carte menu at Roux, and contrary to our last visit, we opted for Palm Court this time around and it didn’t disappoint. The selection is comprehensive, and there is everything from different types of cheeses, bread, pastries, cereals and fruit, to pieces of avocado dressed in Nigella seeds, cherry tomatoes, freshly carved smoked salmon and meats. Croissants straight from the oven are served at the table, as is your choice of fruit juice and hot drinks. It was an excellent start to our Sunday, and a breakfast that you could only dream of having every weekend.

It’s not always easy to do luxury, and some establishments are better than others at bringing it alive. Our excellent first impressions that were made four years ago at The Langham, London, were once again re-affirmed, and it still stands as one of our all-time favourite hotels. They continue to set the bar high, and in our eyes, it will always remain a tough one to beat.

The Langham, London – Where and How?