Simon Wittenberg takes a look at Macallan’s latest offering, Macallan Concept No. 3. It is a collaboration with American Graphic Designer and Art Director David Carson and will be the final release in The Macallan Concept Series.

Concept No. 3 is the latest and final expression in The Macallan Concept Series, a limited collection of annual release whiskies launched in 2017, designed to bring together the artistry and expertise behind the Speyside distillery’s whisky-making with creativity and culture.

Concept No. 3 has been created in collaboration with the highly-acclaimed US graphic designer David Carson, who created a disruptive festive campaign for

The Macallan. He has also worked in the past with the likes of Nike, Levi, Pepsi and Ray-Ban, and is just one of two graphic designers to be selected by Apple as part of its iconic ’30 most innovative users’ list.

This new whisky follows in the close footsteps of Concept No. 2, which combined the twin passions of The Macallan Whisky Maker Steven Bremner, who is also a DJ.

Concept No. 1, unveiled four years ago, was inspired by the discipline of surreal art and brought together imagination and idealism to create a fantastic, sensorial world of whisky where anything and everything was possible.

To achieve a unique take on the design of Concept No. 3, David Carson visited The Macallan’s beautiful 485-acre Estate in Scotland’s Speyside, where he spent time with Polly Logan, the brand’s Whisky Maker.

They discovered the many similarities that define their approach to their respective crafts, as well as their desire to revisit and evolve their work.

The result of these two individuals coming together is a striking presentation box full of colour – inspired by the various hues found on The Macallan Estate, featuring modern art and letters, which include the incorporation of “P” for Polly on the outer packaging. However, remaining prominent are David Carson’s name and the words “Pear, cinnamon, vanilla”, a hint of what lies within. 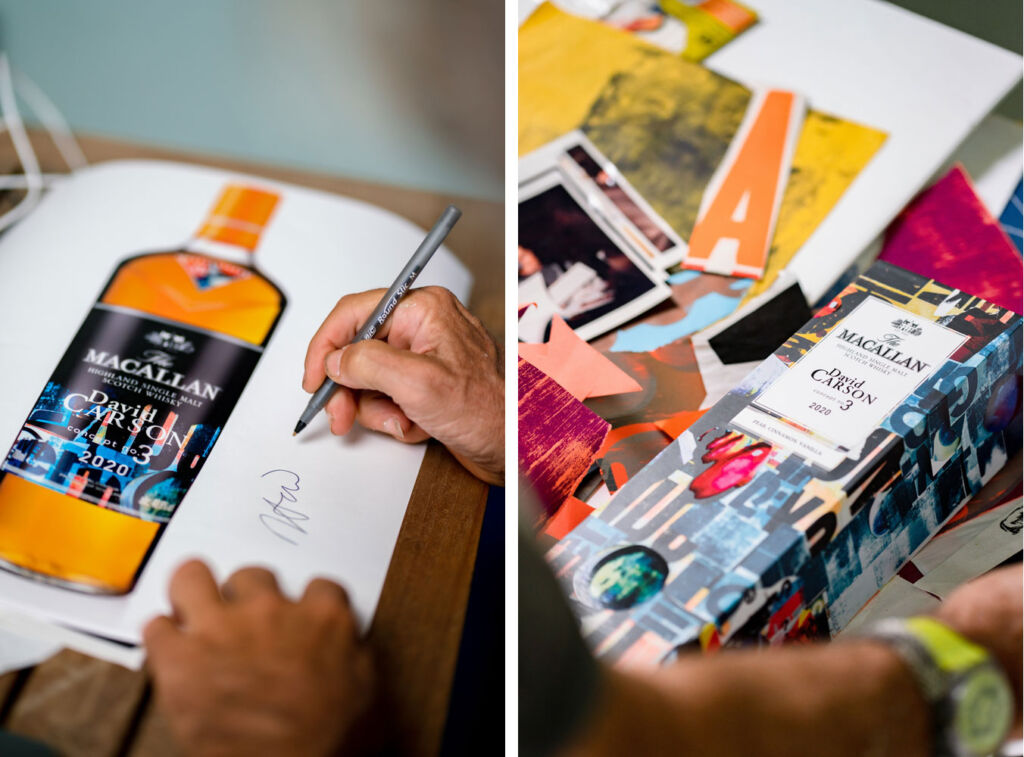 The bottle itself is just as impressive. Topped with a chevron bearing the signature of David Carson, The Macallan Concept No. 3 boasts a black label (as opposed to the white one on the box), acting as the perfect contrast to the colour of the whisky, which has been named “Californian Gold” to reflect David’s sun-soaked days as a surfer, and the citrus notes which shine through.

The Macallan’s Polly Logan explained that it had been an absolute joy to work with David Carson on the creation of Concept No. 3 and that she was deeply inspired by his vibrancy. In fact, she has drawn influence from David’s character and career when defining Concept No. 3.

This whisky has been carefully crafted to deliver complexity from predominantly first fill sherry seasoned American oak casks that give sweetness and spice, enhanced by a selection of European oak casks to add depth and richness. Balance and freshness are achieved by specially selected refill and virgin oak casks.

With The Macallan Concept No. 3, whisky connoisseurs are treated to an aroma of sweet fresh pear and apricot, gentle oak spice, with warm cinnamon and ginger, followed by vanilla and sweet citrus. On the palate, it’s fresh apple and pear, along with oak spice and delicate herbal notes, leading to a rich, creamy vanilla sweetness. The finish is of medium sweetness with smooth and buttery pastry notes.

The Macallan Concept No. 3 – Where and How?

The Macallan Concept No. 3 is now available from The Macallan Boutiques in selected international airports and China Hainan Island duty-free shops before being introduced more widely to global travel retail hubs from August 2021. It is priced at £115 per bottle.