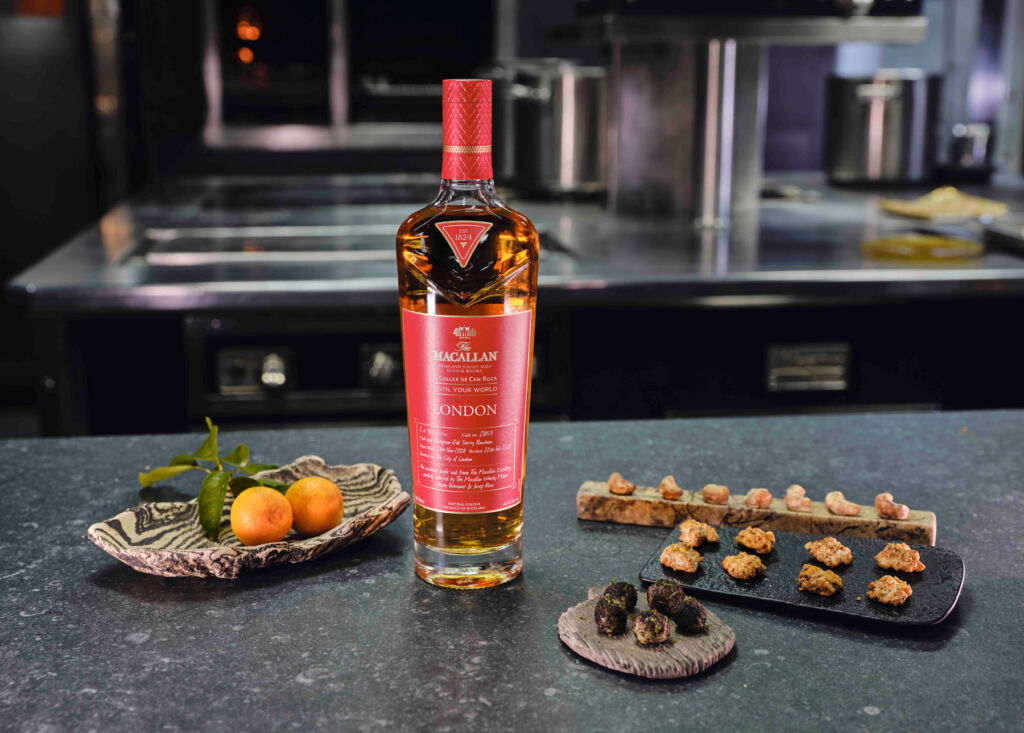 Simon Wittenberg reports back from an exclusive whisky tasting at The Connaught Hotel with Aaron Masonde, The Macallan’s UK Brand Ambassador.

It’s not every day that you receive an invitation to sit down one-to-one with a Brand Ambassador of The Macallan and have the opportunity to sample some truly exceptional whisky. The venue for my tasting with Aaron Masonde, The Macallan’s sole Ambassador for the UK, was the bustling Coburg Bar of the luxury Connaught Hotel in the heart of London’s Mayfair. 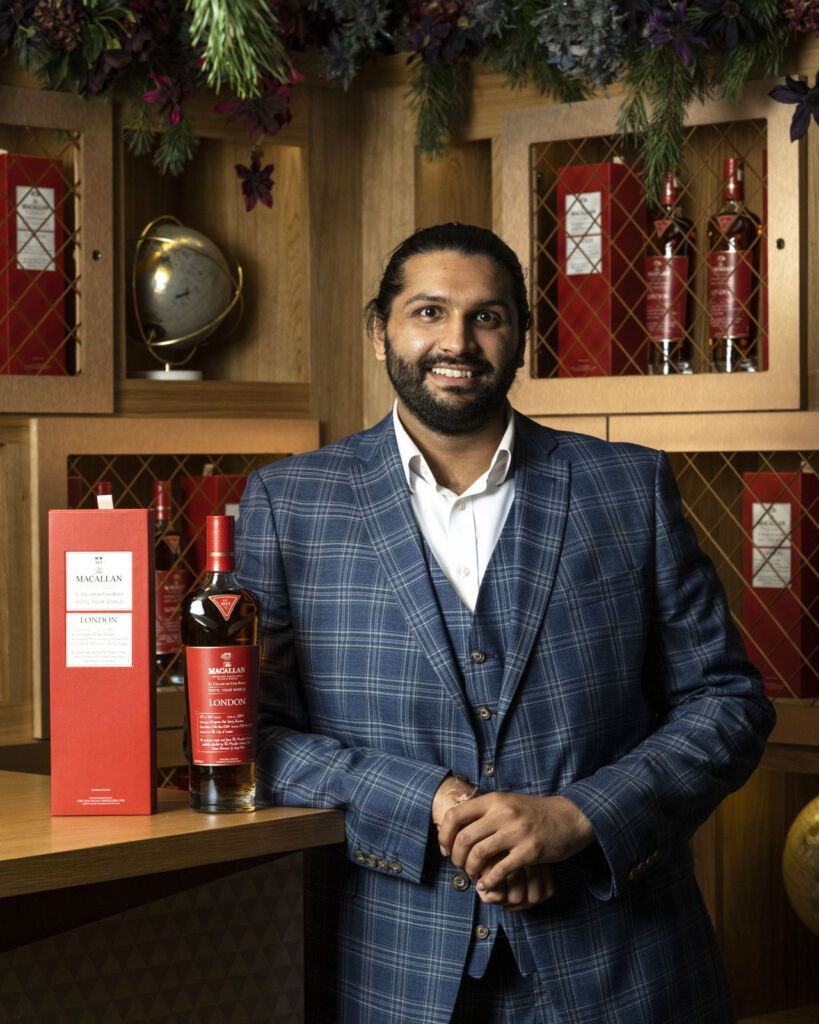 Very charismatic and down-to-earth, and with a clear passion for all things whisky, Aaron joined the renowned Speyside distillery in November 2020 after working as Bar Manager at Oblix, a restaurant situated on the 32nd floor of The Shard.

Forging close links with the spirits world during his nearly eight-year tenure at this eatery, he was invited by The Macallan to apply for the role of Ambassador, a dream job for Aaron and one that he has no intention of relinquishing.

Splitting his time between London and The Macallan’s uber-modern distillery in Speyside, which blends seamlessly into the surrounding countryside thanks to its green wave-like grass roof, his ethos is that whisky is made to be enjoyed, reflected by the fact that all bottles at home are open. In fact, he has no interest in creating a whisky collection of his own, despite being surrounded by such an expansive portfolio of precious liquid.

When asked whether he receives any staff discounts as part of the privileges of working at the distillery, Aaron’s response was that The Macallan does not even make enough whisky to satisfy current demand thanks to the global and far-reaching customer base, and following that, this brand has successfully built since its inception nearly two hundred years ago in 1824.

After chatting about the evolution and popularity of the distillery over a glass of smooth Macallan 12 Year Old Sherry Oak single malt, whilst enjoying a helping of The Connaught’s finest green olives and moreish hand-cooked crisps, one of the Coburg Bar’s highly ornate wooden drinks trollies, furnished with a map of the world, was brought over to our table.

A bottle of single malt Scotch whisky was propped up on one side with a deep red-coloured label, going by the name of The Macallan Distil Your World London. 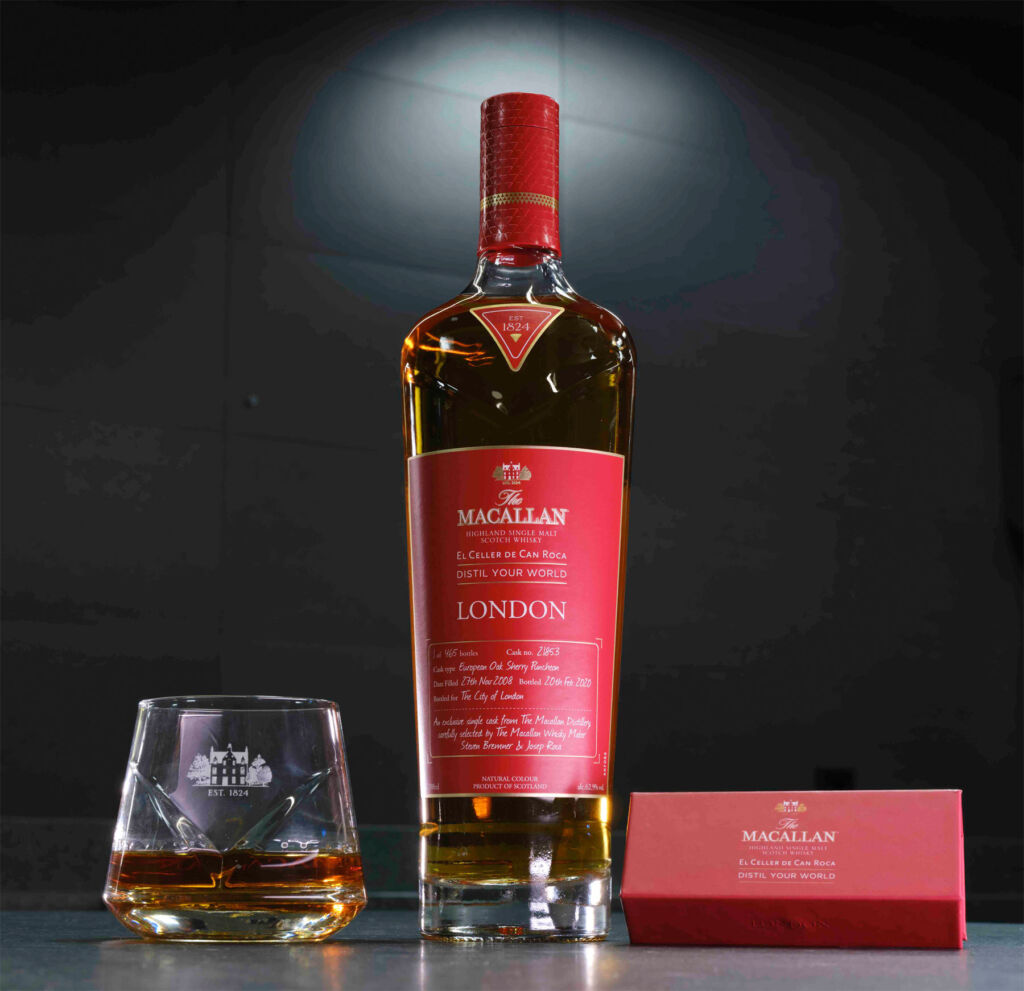 This expression marked the debut of a new collection celebrating the essence of some of the world’s greatest cities in collaboration with the Roca Brothers – chef proprietors of El Celler de Can Roca, a three-Michelin Star restaurant in Girona, northeast Spain.

This particular edition was only made available for the City of London’s “on-trade”, i.e. a few select bars and hotels across the capital, with The Connaught, Claridges, and Annabel’s private members’ club in Mayfair being amongst the chosen few to receive this expression.

The dram that we sampled came from bottle number 298 from the 465 produced from a single cask (21853), a 500-litre European oak Sherry puncheon carefully selected at The Macallan Estate by The Macallan’s Whisky Maker Steven Bremner and Josep Roca – the middle of the three Roca brothers, and the sommelier at El Celler de Can Roca. Boasting a natural golden oak hue, this single malt is, in essence, a 12-year-old, having been laid down on 27th November 2008 before being bottled at the Speyside distillery on 20th February 2020 as the pandemic started to take hold. 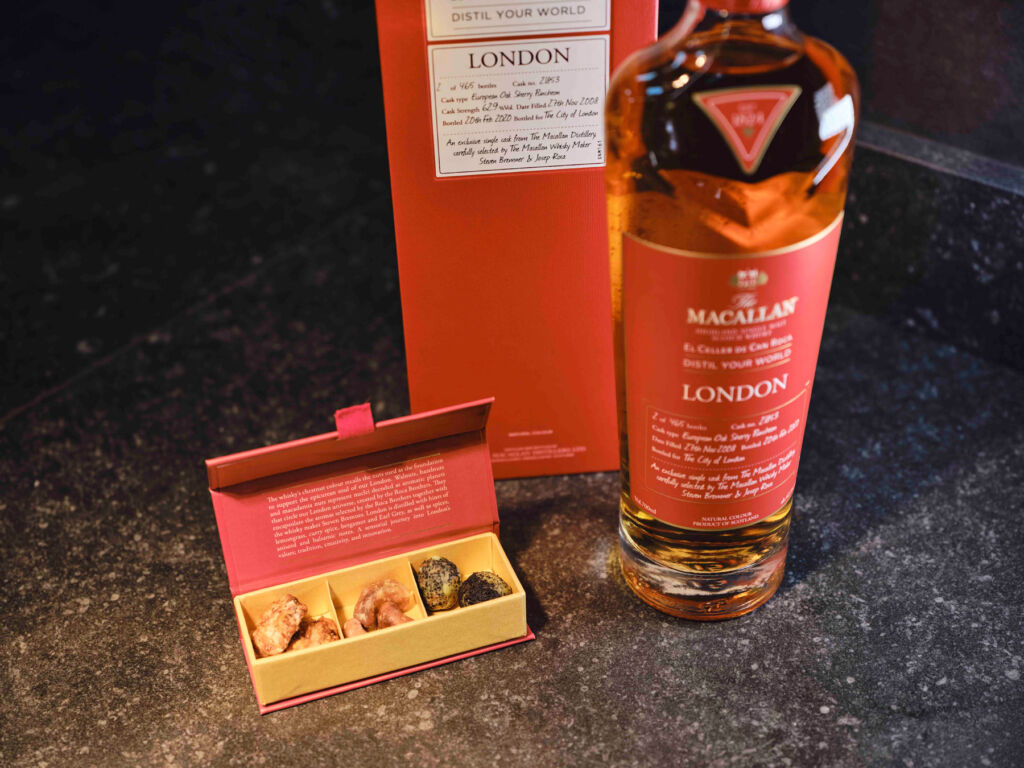 This is, however, not your “average” 12. Highlighting its exclusivity, this expression is listed at £95 a dram on the Coburg Bar’s “Whisky Compendium” menu. When you do the maths, each bottle of Distil Your World London is 700ml, and with a typical dram measuring 25ml, there is around £2,800 to be made, which is not a bad return, considering the purchase price at launch was a mere £300.

If you were to look online today for the “on-trade” edition, bottles 83 and 305, which have seeped into the public domain, alongside a few which have gone to auction, will set you back an eye-watering £20,000. On a similar note, The Macallan’s limited edition Distil Your World London expression, which was launched in the autumn of 2020, with 2,000 bottles being made available globally with a price tag of around £4,000, is also now commanding values in the region of in excess of £12,000 when it goes under the hammer. 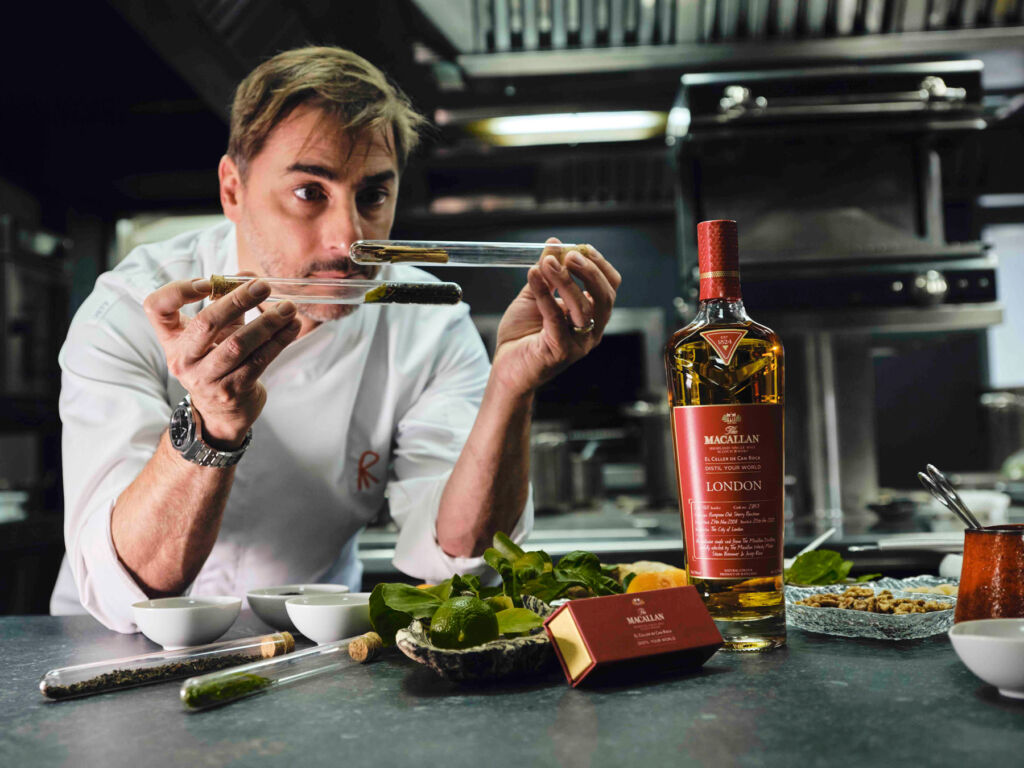 The Macallan worked closely with the gastronomic expertise and artistry of the Roca brothers to capture the very meaning of what London signifies and to communicate this through the definition of notes and aromas to create an exquisite whisky.

The result can only be described as the closest thing to drinking aged balsamic vinegar, which wouldn’t appeal to all, but this is an exquisite whisky where your palate will never forget trying this true masterpiece. On the nose are notes of sweet raisin, ground ginger and cinnamon, complemented by a rich, spicy finish.

Bottled at a relatively high ABV of 62.9%, drinking Distil Your World London neat is a powerful experience with a “pleasant” burning sensation as it glides down your throat. This particular expression was exceptional and even too special to add a touch of water, even though this can offer a different experience.

Paying £20,000 for a bottle of Distil Your World London is in reach of the few, plus the on-trade edition is few and far between, so if you’re after a “similar” experience, I would recommend trying the Starward Fortis single malt from Australia which has a comparatively more affordable £60 price tag and brings hints of cinnamon, raisins and spices. 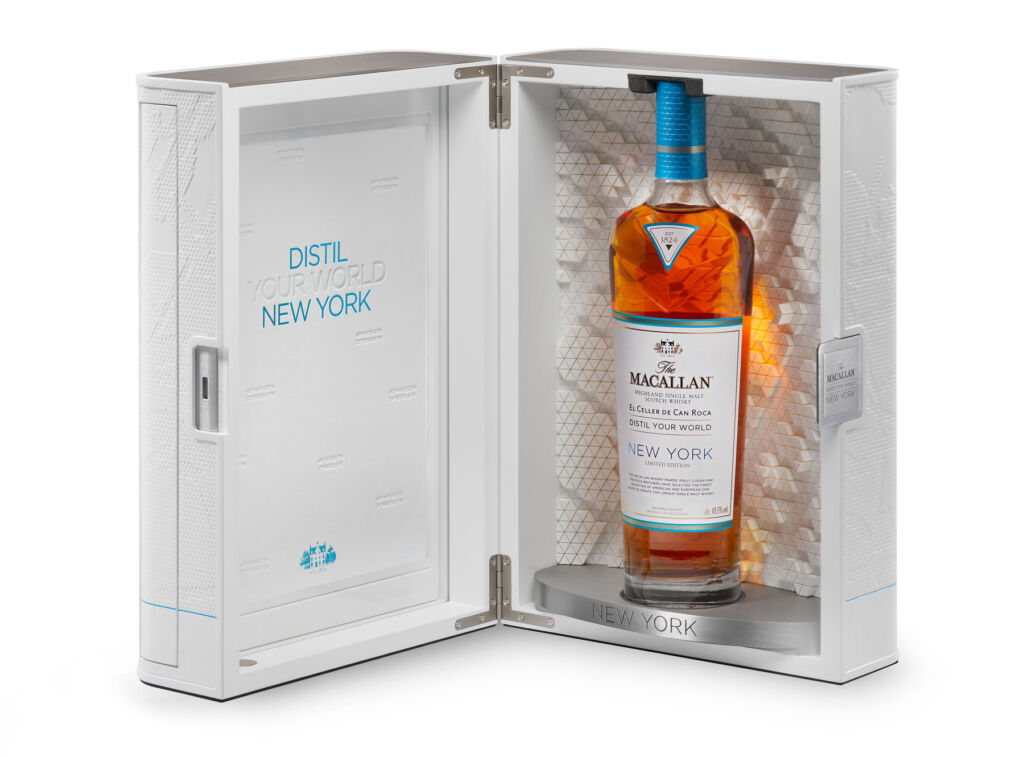 Having also been fortunate to have had the chance to also try The Macallan’s Distil Your World New York single malt, released this year, there is a more mellow, sweet and elegant tone about it, where apple plays a key role. This comes as no surprise because this renowned American city is nicknamed “The Big Apple”. But, there are also subtle hints of candy and citrus, so it is a completely different offering when compared to its London relation. 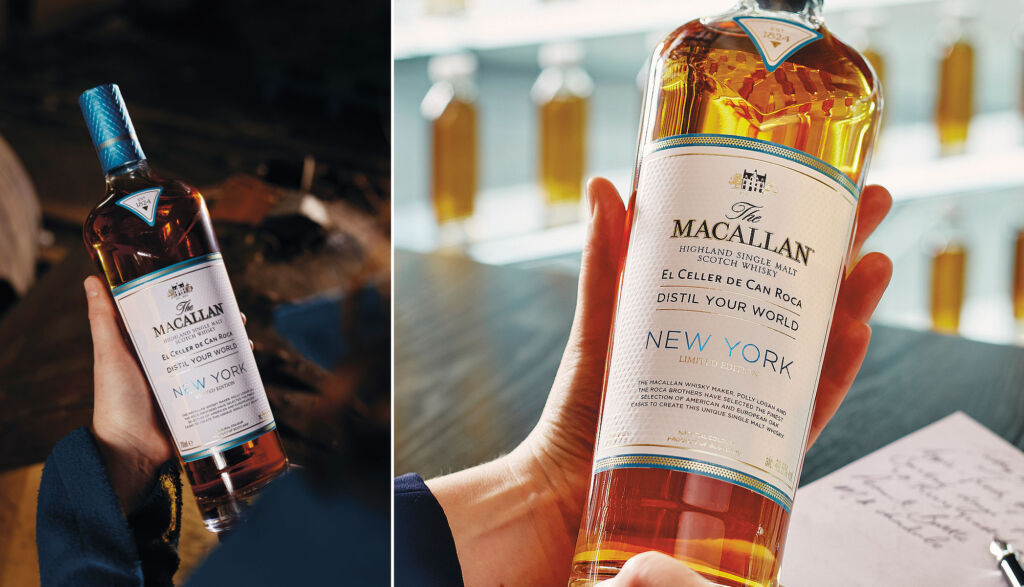 At 49.5% ABV, this whisky is also more subtle to drink on its own, and with a price tag of nearly £20,000 at auction (the RRP was set at £3,100 to put this “market value” into some kind of perspective), this collaboration between The Macallan Whisky Maker’s Polly Logan and Joan Roca – Head chef at El Celler de Can Roca, has been another roaring success amongst whisky aficionados.

After successfully conquering the definitions of London and New York, it will be intriguing to see where The Macallan’s special and memorable “Distil Your” voyage heads next. My guess…somewhere in Asia. 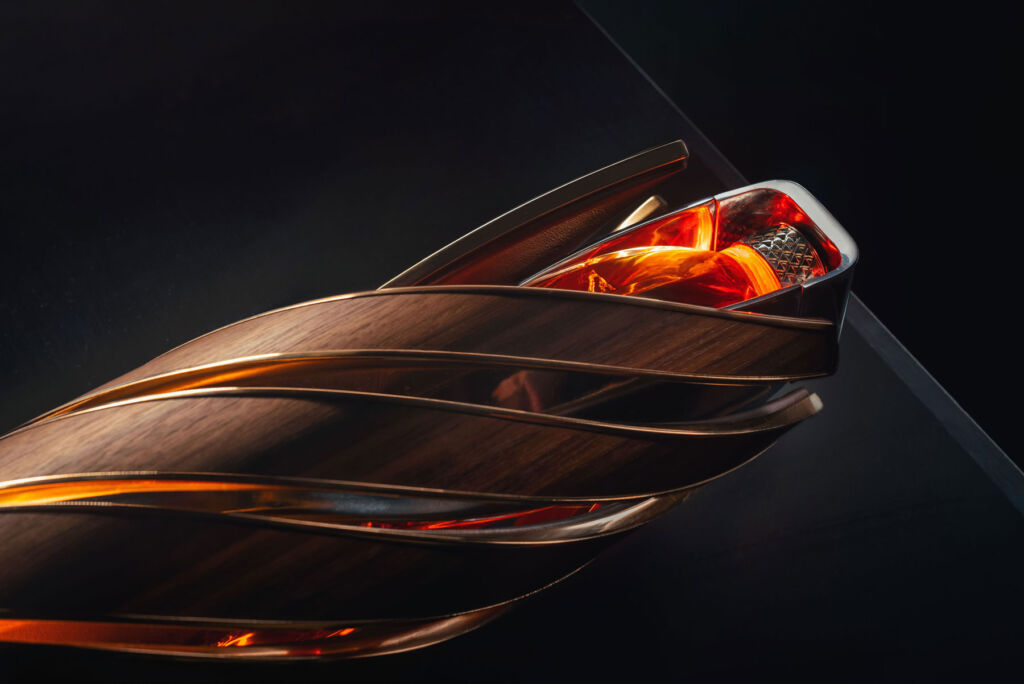 Last year saw the debut of The Macallan’s partnership with Bentley Motors, and, as part of the collaboration, the brands have come together to create The Macallan Horizon, a highly innovative limited edition single malt whisky which is scheduled for release in the summer of 2023. Currently billed as a prototype to show the vision of an exclusive horizontal bottle design with a 180-degree twist, it incorporates traditional craftsmanship and innovative materials with cutting-edge technology.

The Macallan Distil Your World London and New York – Where and How?