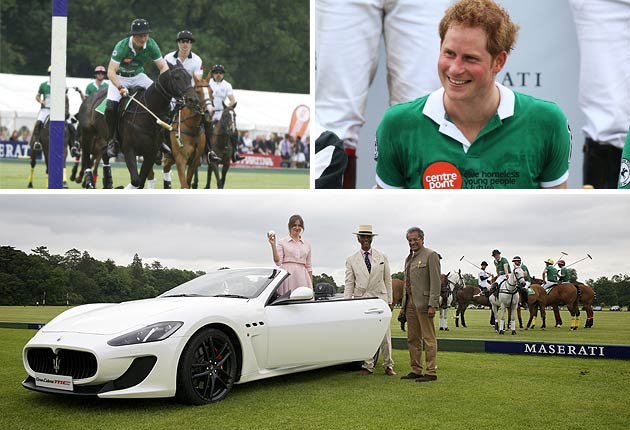 It’s always exciting when top brands come together to create exciting events and the involvement of Maserati and La Martina for the Jerudong Park Polo Trophy is no exception. This is the third event of Maserati’s celebratory tour which has already seen thrilling action on the field in Palm Beach in the USA and in Tianjin in China.

Playing in the UK match on the iconic Ivy Lodge ground were two very special guests; HRH The Duke of Cambridge played on the Maserati team whilst his brother HRH Prince Henry of Wales played on the opposing BMG team. Both took part in the game in aid of their chosen charities Centrepoint, Child Bereavement and Well Child. The Duchess of Cambridge and Prince George were also in attendance at Cirencester Park yesterday to cheer on HRH The Duke of Cambridge on Father’s Day.

At the end, it was the Maserati Team that secured a well-contested victory, with a final score of 8-7.5. The ‘Best Playing Pony’ accolade was awarded to New Zealand’s highest ranking polo player, John Paul Clarkin’s, chestnut pony who is coincidentally and very aptly named ‘Maserati’.

HRH The Duke of Cambridge was named ‘Most Valuable Player of the Match’ and was presented with a La Martina Pro Evolution Helmet by the polo brand’s co-founder, Gachi Ferrari.

Maserati together with its global brand partner, La Martina, showcased a bespoke one-off polo saddle, something that we featured last week, which the two companies created in partnership to celebrate the centennial tour. The stylish saddle was on show alongside the newest model in Maserati’s line-up; the Ghibli executive saloon. Also on display was Maserati’s flagship model; the luxury four door Quattroporte.

Giulio Pastore, General Manager Maserati Europe, presented the winning team with a trophy alongside the club’s chairman, Kuldip Dhillon. Speaking about the event Pastore said “Maserati was proud to be at Cirencester Park Polo Club for such a momentous match on the British social calendar. Polo is about passion, performance and style – values which we share at Maserati”

Having already visited the USA, China and the UK, the next international destination is Montecarlo from 3rd to 6th July, followed by United Arab Emirates in the autumn. A grand finale event will take place in early 2015 in Maserati’s homeland of Italy, where the tour’s best player will receive the Maserati Centennial Award.