Maximilian Busser, MB&F and Only Watch

Maximilian Busser knew that he would participate in Only Watch the moment he spoke to Luc Pettavino, the President of AMM (Monegasque Association against Muscular Dystrophies). “At my age if I contract a serious illness, I can say that I have already lived a full life. But for a child just starting out, it is a tragedy.” 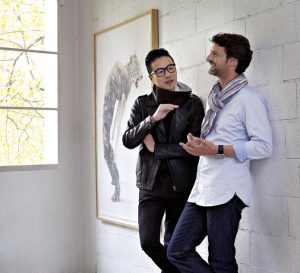 While Maximilian Busser would never claim to understand the suffering of a child with this disease, childhood holds a special significance for him. For all their sophistication, the lovingly crafted time machines he dreams up have their roots in his own earliest years. It was only after his father passed away that Maximilian Busser felt free to cast off the chains of reality and let his creative spirit soar free. “There are two occasions when you become conscious of mortality, when you have a child, and when a parent dies.”His father’s death prompted him to leave what he admits was a dream job (CEO of Harry Winston Timepieces) and form Maximilian Busser and Friends (MB&F), a concept laboratory dedicated solely to designing and crafting small series of radical concept watches in collaboration with talented professionals. In Maximilians own words, he was “letting my heart speak instead of my head.”

Joining the battle to save children from muscular dystrophy

Duchenne muscular dystrophy is a serious genetic disorder affecting 1 out of every 3,500 boys. It is characterised by a progressive weakening of the muscles, that results in respiratory and cardiac problems that become fatal as the child gets older. There are around 30,000 sufferers of the disease in Europe alone.
There is no cure for the disease, but researchers are making considerable progress. One of the most important breakthroughs is the development of saut d’exon, a surgical technique that enables the cellular machinery to ‘forget’ to read the part of the gene that’s carrying the abnormality. This technique was developed by Luis Garcia, head of research at the French National Center for Scientific Research (CNRS), and his team. CNRS is a key player in the field of duchenne muscular dystrophy and is one of twenty research teams benefitting from AMM’s financial support.
The Artists – Huang Hankang
Huang was born in 1977 in Suzhou, China, he began painting when he was just seven years old. After earning an art degree, he moved to Paris to further his artistic education, learn more about the world outside of China and experience a different culture. His talent was internationally recognised in 2007 with an exhibition in New York and subsequent exhibitions in Europe. Huang Hankang usually paints with watercolours, utilising their nuanced delicacy and light colours to code powerful yet often sublime messages. Huang’s paintings ask the viewer intriguing questions rather than make cut-and-dry statements. These paintings often feature juxtapositions of animals in unusual situations or positions—a panda bear flying a horological spaceship is certainly a consistent expression of his philosophy.

Huang uses art as a method of communication to spread his message to a broader public. The Only Watch project with MB&F provided an unusual horological canvas on which to ‘paint’ his message, however, he jumped at the opportunity upon discovering that MB&F’s Horological Machines are closer to art than to watchmaking and are as much products of Maximilian Büsser’s fertile imagination as Huang’s paintings are to his own imagination.

About the Horological Machine No.4 Thunderbolt 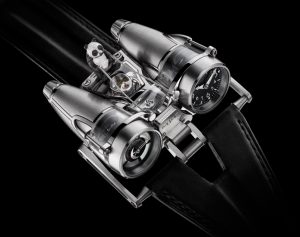 Inspiration and realisation: A long childhood passion for assembling model aircraft had Maximilian Busser‘s walls, cupboards and ceiling covered in small aircraft of every description. Planes were the last things he saw at night and the first things he saw each morning. As Busser the boy became a man, something of the child and his planes remained, quietly waiting until… HM4 Thunderbolt! Many boys sketch supercars and fast planes, but few have the drive and determination to make their dreams come true. Maximilian Busser created MB&F to do just that. HM4 Thunderbolt was born of the child’s fantasy and the man’s tenacity.

Engine:
Each of the Thunderbolt’s movement’s 311 components was developed specifically for it; no off the shelf mechanisms or parts were used at all due to the extreme nature of its architecture. Two mainspring barrels connected in parallel provide 72 hours’ worth of energy, and they transfer their power to the dual jet turbine-like indication pods (one displaying the hours and minutes, the other the power reserve) via vertical gear trains. Visible through a shaped sapphire display panel on the top of the case, a distinctive streamlined cock supports the balance, its centre cut away to reveal as much of the oscillating wheel as possible and validating the ‘kinetic’ in MB&F’s ‘kinetic art.’

Indications:
On the left pod, the amount of fuel in the tanks, or power reserve, is clearly indicated by a skeletonised hand echoing MB&F’s battle axe motif. On the right, hours and minutes are displayed by bold, arrow-tipped Super LumiNova filled hands. Each of the two instrument-styled aviation dials is directly controlled by its own crown, one to wind and refuel the tanks, the other to set the time, providing direct and instantaneous feedback of the action performed.

Case:
Inspired by aviation, HM4s case imparts speed, power, technology, and refinement in equal measure. Visually, the case is composed of three parts: two streamlined jet turbine styled pods supported by a horizontal section housing the engine, which is clearly visible through transparent sapphire display panels; and the central section of the case itself. Technically there are also three main sections, but these comprise a fore section in titanium, which includes the dials and articulated front lugs; a central section in sapphire offering unprecedented 360 degree access to the superbly finished engine; and an aft section tapering down to the dual crowns and framing the animated balance, which is supported by an aerodynamic cock. Beginning with a solid piece of sapphire, more than 100 hours of intricate machining and meticulous polishing are required to turn an opaque block of crystal into the clear, light filled atrium of the central case section, which reveals part of the Thunderbolt’s engine and engineering details.

The contrasts of matte with highly polished surfaces, titanium with sapphire, straight lines with seductive curves, and rigid forms with articulated arms endow Horological Machine No4 with a life and vibrancy that sets it apart from anything that has ever gone before.