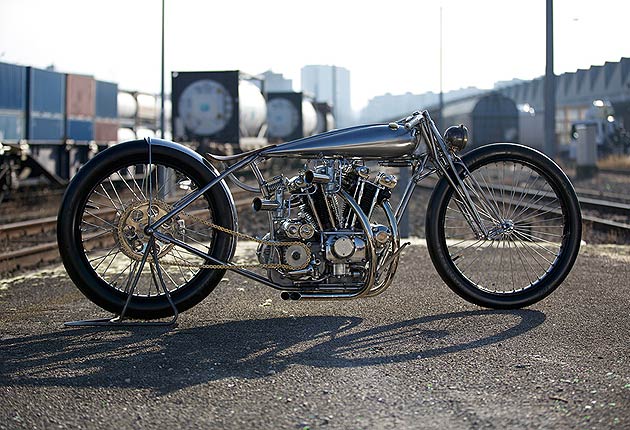 Retro styling, subtle frosted effects and a hint of patina endow these wonders with a vintage look, while unconventional components – a tractor headlight and even kitchen utensils – play precise roles within the overall architecture. The mechanical complexity of the visible engines contrasts with the clean design lines, further enhancing the creative tension.

The starting point for each of the New Yorker’s unique motorbikes is the engine. Hazan begins by finding a motor that he considers aesthetically pleasing and then builds around that. Hazan’s career creating motorbikes began by accident, quite literally. After a motocross misadventure, he was forced to recuperate on his couch for three months, in which time the Psychology graduate spent hours each day staring at the beach cruiser bicycle he kept in his living room. He contemplated adding an engine to it, which he eventually did, but soon decided that motorbikes would be his preferred medium.

Hazan’s Royal Enfield
Hazan fell in love with the Royal Enfield motor when he saw a photo of an Enfield that his sister had rented in India. Two years ago, he decided to buy a 1996 Royal Enfield motor and began six months of solid work on it. Hazan’s tribute to the Enfield puts the spotlight most definitely on this engine, the beating heart, accompanied by a double cam system with bronze chains. The front wheel of the bike boasts an impressive drum-braking system; the handlebars above bear metallic grips. The silvered components of the frame and engine gently contrast with the ruddy patina of the fuel tank and rich brown tones of the über graceful, hand-carved wooden seat floating over the plump back tyre. The seat is inspired by the design of vintage Italian speedboats, and Hazan completely refinished it three times to compensate for the expansion and contraction of the wood.

Hazan’s Harley Davidson Ironhead
Hazan’s Ironhead is just as spectacular, featuring an innovative front suspension with horizontal shock absorber. Ironhead motors had long held a special place in his heart before he finally began work on his own last year. Hazan’s Ironhead boasts a rare elegance for a motorcycle. While the engine is a joy to behold, the fuel tank also steals some of its thunder. It was worth the effort. With the tank’s silvered finish and curvaceous, tapered form, it resembles a leaping salmon and fits seamlessly into the general frame. The frame’s visible weld-joints only add to the bike’s charms.

The trick, apparently, for creating these mechanico-artistic gems, is for Hazan to constantly force himself to step out of his comfort zone. In the short period that Hazan has been dedicating himself full-time to custom motorbike creation, his work has garnered a keen following. In fact, his first customer was none other than Austrian daredevil Felix Baumgartner – the man who fell to earth from space – and as it turns out, the man who couldn’t help falling for one of Max Hazan’s hand-built motorbikes. And who can blame him?

You can see the Max Hazan creations at the MB&F, M.A.D.Gallery, Rue Verdaine 11, 1204 Geneva, Switzerland