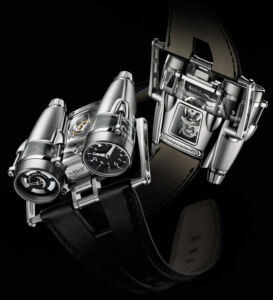 A single glance at the HM4 Thunderbolt watch tells you that you are looking at something special, it sits within the same stratosphere as the original Lamborghini Countach car or the wrestler Andre The Giant, both of these are what they are, simply a car and a wrestler. The same similie can be atributed to the MB&F HM4, it is what it is, a watch… but like the other two you’ll find yourself standing and looking at it jaw agape!

HM4 Thunderbolt is not a traditional wristwatch.

The aviation-inspired case and engine of the HM4 Thunderbolt are one. Neither would, nor could, exist without the other, yet each is so transcendental as to be able to stand alone as a work of art in its own right.

The HM4 Thunderbolt engine is the culmination of 3 years of development. Each of the 300-plus components – including the regulator and even the screws – was developed specifically for this anarchistic calibre. Horizontally configured dual mainspring barrels drive two vertical gear trains, transferring power to the twin pods indicating hours/minutes and power reserve.

But describing HM4 Thunderbolt engine through its mechanical functionality is like describing Renoir’s work through the chemical composition of his paint. Only careful contemplation enables full appreciation, and the sapphire case section and display panels top and bottom allow full access to the flawless fine finishing of HM4 Thunderbolt’s intricate and vibrant micro-mechanics.

The sleek aerodynamic form of the HM4 Thunderbolt titanium and sapphire envelope has its roots in Maximilian Büsser’s childhood passion for assembling model plane kits, though none looked remotely as futuristic as this. The striking transparent sapphire section of the case requires over 100 hours of machining and polishing to transform an opaque solid block of crystal into a complex, exquisitely curved panel allowing the light to come in and the beauty of HM4 Thunderbolt engine to stand out. Every component and form has a technical purpose; nothing is superfluous and every line and curve is in poetic harmony.  Articulated lugs ensure supreme comfort. Highly legible time is a fringe benefit. 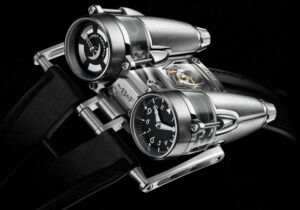 Who are MB&F?
After decades learning and conforming to the corporate rules of watchmaking, Maximilian Büsser broke the chains and started a rebellion – a rebellion called MB&F. MB&F is an artistic and micro-engineering concept laboratory in which collectives of independent horological professionals are assembled each year to design and craft radical Horological Machines. The ramifications of these audacious projects are profound. Respecting tradition but not shackled by it, MB&F fuses traditional, high-quality watchmaking with cutting-edge technology to create three-dimensional kinetic sculptures.

The boy became a man, but something of the child and his planes remained, quietly waiting until… HM4 Thunderbolt!
Many boys sketch supercars and fast planes, but few have the drive and determination to make their dreams come true. Büsser created MB&F to do just that. The HM4 Thunderbolt is born of the child’s fantasy and the man’s tenacity.

Engine: The HM4 Thunderbolt engine was entirely designed and developed by MB&F over three years of intensive work with Laurent Besse and Beranger Reynard of Les Artisans Horlogers. Each of the 311 components were developed specifically for the MB&F HM4 Thunderbolt, no off-the-shelf mechanisms or parts were used at all due to the extreme nature of its architecture.

Two mainspring barrels connected in parallel provide 72 hours of energy, and they transfer their power to the dual jet-turbine-like indication pods (one displaying the hours and minutes, the other the power reserve) via vertical gear trains.

Visible through a shaped sapphire display panel on the top of the case, a distinctive streamlined cock supports the balance, its centre cut away to reveal as much of the oscillating wheel as possible and validating the “kinetic” in MB&F’s “kinetic art”.

A work of art rewards when viewed from different angles and the HM4 Thunderbolt is no exception. Turning the machine over reveals a veritable panorama of meticulously finished micro-engineering through the sapphire sections. In a playful trompe d’oeil, what at first glance appears to be a micro-rotor in the form of MB&F’s iconic battle-axe is actually a bridge.

HM4 Thunderbolt Indications:
For a timepiece not developed specifically to tell the time, the HM4 Thunderbolt performs that role superbly. In fact, with its highly legible dials perpendicular to the wearer’s wrist, the HM4 Thunderbolt might be described as the perfect pilot’s or driver’s watch. On the left pod, the amount of fuel in the tanks – or power reserve – is clearly indicated by a skeletonised hand echoing MB&F’s battle-axe motif. On the right, hours and minutes are displayed by bold, arrow-tipped Super-LumiNova filled hands. Each of the two aviation instrument-styled dials is directly controlled by its own crown, one to wind and re-fuel the tanks, the other to set the time, which provides direct and instantaneous feedback of the action performed.

HM4 Thunderbolt Case:
Inspired by aviation, more specifically the model aircraft kits of Maximilian Büsser’s childhood, the case of HM4 Thunderbolt imparts speed, power, technology and refinement in equal measure. Visually, the case is composed of three parts: two streamlined jet-turbine-styled pods supported by a horizontal section housing the engine, which is clearly visible through transparent sapphire display panels and the central section of the case itself.  Technically there are also three main sections, but these comprise a fore section in titanium, which includes the dials and articulated front lugs; a central section in sapphire offering unprecedented 360° access to the superbly finished engine; and an aft section tapering down to the dual crowns and framing the animated balance, which is supported by an aerodynamic cock. Methods borrowed from aeronautic engineering are visible in the externally mounted screws, which provide both rigidity and watch resistance to hold the case’s three sections solidly and elegantly together.  Beginning with a solid piece of sapphire, more than 100 hours of intricate machining and meticulous polishing are required to turn an opaque block of crystal into the clear, light-filled atrium of the central case section, which reveals part of the MB&F HM4 Thunderbolt engine and engineering details. The metal case sections are milled from solid blocks of high-tech Grade 5 titanium, which undergoes hundreds of hours of machining before polishing, masking and finally satin-finishing of the surfaces. The results speak for themselves. The contrasts of matte with highly polished surfaces, titanium with sapphire, straight lines with seductive curves and rigid forms with articulated arms endows MB&Fs HM4 Thunderbolt with a life and vibrancy that sets it apart from anything that has ever gone before.

HM4 Thunderbolt is the quintessential machine as three-dimensional kinetic art.

MB&F HM4 Thunderbolt a Rupture in Art and a Rupture in Watchmaking
Impressionist paintings scared classicists and were greatly misunderstood. MB&F’s Horological Machines scare classicists and are greatly misunderstood. Horological Machine No4 is unlikely to change that, but the rupture with traditional watchmaking is so complete that it allows the HM4 Thunderbolt to be appreciated for what it is, i.e. raw, unfettered three-dimensional kinetic art. Until the 19th century, art was fairly straightforward: painters did their best to replicate what they saw and their skill was judged on how closely they copied reality, with little latitude allowed for a brush-stroke or two of emotion. With the introduction of photography, even the greatest traditional artists could not compete in terms of realism. But that liberated more adventurous artists like Monet, Cézanne and Renoir to break from realism and to paint, not just with a brush-stroke or two of emotion but with raw, unfettered emotion. In impressionist art, the fundamentals of the medium remain, i.e. paint on canvas, but the result was a rupture with the past. With MB&F’s Horological Machines, again the fundamentals of the (horological) medium remain, i.e. intricate mechanical movements, and again the result is a rupture with the past.

MB&F HM4 Thunderbolt Summary:
The HM4 Thunderbolt is truly a work of horological art, just like driving a Countach, or one of its more modern variants, or being over 7 feet tall, you are going to garner attention. I’ll bet that you cannot wear the HM4 Thunderbolt watch without people saying ‘what’s that’? and ‘let me see it’. Some people look at a Picasso and say what the ‘heck’ is that? Others say that’s incredible. I look at the HM4 and say ‘that’s incredible’.