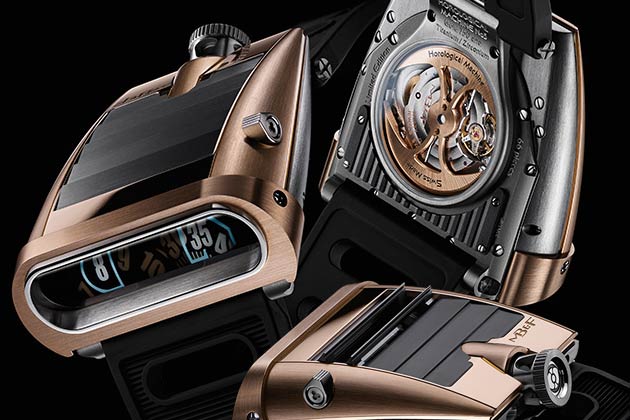 Maximilian Büsser and friends (MB&F) are consistantly producing incredible looking timepieces that garner both international acclaim from the watch industry and a growing legion of fans. The latest piece of Horological Art from the Geneva based manufacturer is the HM5 RT (Red Gold).

The MB&F HM5 RT draws its inspiration from the 1970s, a time when we were not quite as blasé about technology. Imagine the excitement and dreams of the future back then. Man could fly on the road with a new genre of streamlined supercars; fly on the sea with hovercrafts; fly at supersonic speeds on Concorde; and fly to the moon in Apollo. Everything seemed possible: humanoid robots, personal jet-packs and flying cars were surely just around the corner. In the 1970s the future was not tomorrow, it was today! While we might still be waiting for flying cars, with the HM5 RT you can put a high-tech golden supercar on your wrist!

This unmistakable timepiece is difficult to describe with just words and requires pictures to show its design which is both futuristic and retro in style. This watch is a statement, it has a deep-brush wedge-shaped case in red gold, measuring an imposing 51.5mm x 49mm x 22.5mm and wonderfully thought out touches including exhaust ports to drain water! Grade 5 titanium flank the lower sides and base of the case highlighting the red gold. As with any supercar, the best often lies under the hood and ‘lifting the hood’ of the HM5 RTcase reveals a surprise: an inner case! Like a Russian Matryoshka doll, peeling away one layer reveals a second case in titanium. The reason for housing the Engine in an inner container is for water resistance. Those supercar louvres let in water as well as light − the reason for those dual exhaust ports – so to protect the high-performance Engine from moisture as well as shocks, it is housed in its own titanium shell. This inner case is similar to the rigid chassis of a car on which the external coachwork/body is attached.

The hour and minute displays look straightforward but they are bi-directional jumping hours with indications inversed, reflected 90° and magnified 20%. The movement is a three-dimensional engine developed by Jean-François Mojon and Vincent Boucard of Chronode powered by a Sowind gear train coupled with Battle-axe 22k gold mystery automatic winding rotor. The finishing touch is sculptured rubber strap with titanium tang buckle.

The HM5 RT will be available in a limited edition of just 66 pieces in 5N red gold and titanium.