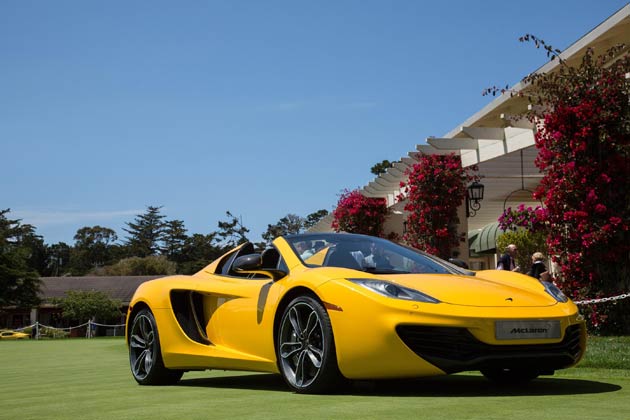 The stunning McLaren 12C Spider is set for its European debut, and first royal engagement, this weekend as it takes centre stage at the inaugural Windsor Concours of Elegance.

The second model in the 12C family will form part of a four car McLaren display in the grounds of Windsor Castle, the oldest and largest inhabited castle in the world.

Following the recent global unveiling at the Pebble Beach Concours d’Elegance, the McLaren 12C Spider, finished in striking Volcano Yellow, will be displayed as part of a line-up representing McLaren Automotive, McLaren GT and McLaren Racing. These cars will join a diverse collection of some of the rarest and exclusive road and racing cars which will be shown as part of the Concours of Elegance, with Windsor Castle providing a dramatic, and very regal, backdrop.

Adding to the occasion will be a second example of the McLaren 12C Spider which will make its dynamic debut on Sunday, 9 September. The luxury convertible sports car will travel from Kensington Palace in central London out to Windsor Castle as part of the Octane Jubilee Tour of Elegance.

The rolling showcase is a celebration of each of The Queen’s 60 years as monarch, and will feature an automotive icon from each year. As the latest model, the 12C Spider will conclude the parade, representing 2012; the Diamond year of The Queen’s reign.

As an ambassador of the ‘Make Britain GREAT’ campaign, the 12C Spider will be driven by British actor Henry Cavill, star of the latest Superman film, entitled ‘Man of Steel’. The GREAT campaign is designed to re-affirm Britain’s international reputation and deliver long-term economic benefits through additional tourism, trade and education.

McLaren GT will also be present on the lawns of the famous royal residence with the patriotic McLaren 12C GT3 race car adorned with the unique Union Flag livery, which premiered at this year’s Goodwood Festival of Speed. The design highlights McLaren Group’s support of the ‘GREAT’ campaign launched by the Prime Minister’s Office and Department for Culture, Media and Sport. 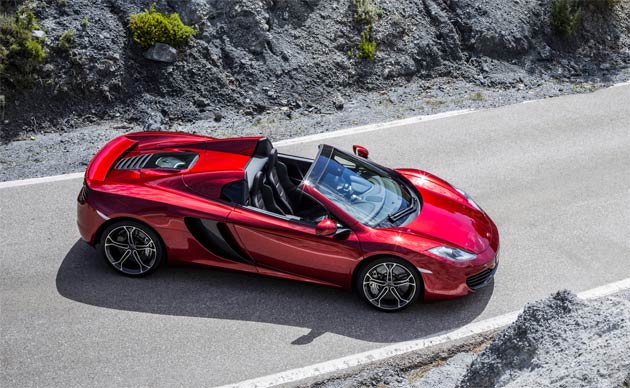 Joining the display will be a 12C featuring a front bumper with revised styling from McLaren Special Operations (MSO),the division of McLaren Automotive responsible for the delivery of bespoke projects. Available as a factory-fit option or through MSO as a retro-fit option for both 12C and 12C Spider, the more aggressive styling creates a more dynamic visual impact.

The lower section of the colour-coded bumper, framing the air intakes, is constructed from carbon fibre, while the front floor is made from race-derived carbon Kevlar. This new floor section incorporates additional diffusers, which delete the tyre spoilers fitted to the standard 12C models.

Completing the McLaren line-up will be the pioneering MP4-1 Formula 1 car, which was the first racing car to use carbon fibre in the production of the chassis. This groundbreaking car proved extremely successful in motorsport, both through its inherent strength and light weight construction, and the carbon fibre technology was quickly adopted by other teams on the grid, and throughout all other forms of motorsport. From here, all McLarens – both for the road and for the track – have been constructed using a carbon fibre chassis ever since. The example being shown was successfully raced by five-time Grand Prix winner John Watson during 1981.