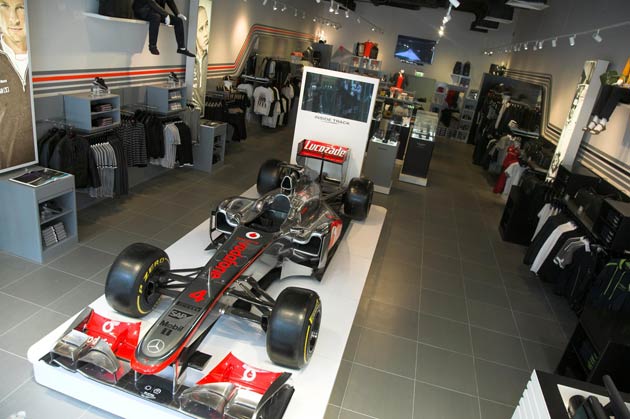 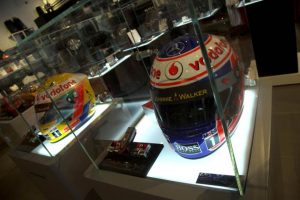 Called Inside Track the store will be the first permanent retail outlet of its kind in the UK and will sell a range of McLaren, Aston Martin and Aston Martin Racing lifestyle merchandise as well as products from the partners of the two brands including Hugo Boss, Hackett, Links of London and TAG Heuer.  The centrepiece of the London store will be the McLaren F1 car, giving fans a rare opportunity to see Jenson Button and Lewis Hamilton’s car close up.

Westfield Stratford City is London’s latest shopping destination, adjacent to the 2012 Olympic Park and is the perfect location to showcase two of Britain’s most successful and globally recognised motorsport brands to the hundreds of thousands of overseas visitors to the Olympics this summer. With items on sale ranging from key rings for a few pounds to the TAG McLaren MP12-4C watch priced at nearly £9000, and including everything from collectible items such as Amalgam 1/8 scale model McLaren and Aston Martin Racing cars, to Hugo Boss jackets, Hackett Aston Martin clothing and luggage, sunglasses, as well as the full range of Vodafone McLaren Mercedes and Aston Martin Racing replica clothing, the store will appeal to a wide cross section of customers.

This unique store has been opened by Brand&, the licensing and merchandising division of Prodrive.  The business manages the merchandise programmes for a number of leading motorsport teams as well as businesses in the motor industry, but until now has only sold products through its wholesale and retail distribution partners, at events and online..

Carl Ball, Brand & managing director, said: “We have been considering a retail outlet for some time now to bring a full range of merchandise, lifestyle and luxury items into the high street to an audience that may not normally consider such products.   Westfield Stratford with its mix of designer outlets and high street brands is the perfect location and thanks to the support from McLaren & Aston Martin we have now been able to make this concept a reality.”

Nigel Moss, McLaren’s merchandising and licensing director, added: “This is an excellent initiative to showcase many of our highly selective McLaren and Vodafone McLaren Mercedes products and the more accessible Formula 1 related merchandise in an off-line environment. Westfield Stratford is a top venue, which will be visited by a high number of diverse people in the coming few months and we are excited to help in flying the Great British flag there.”

The store is on ‘The Street’ in Westfield Stratford City and is open 7 days a week.