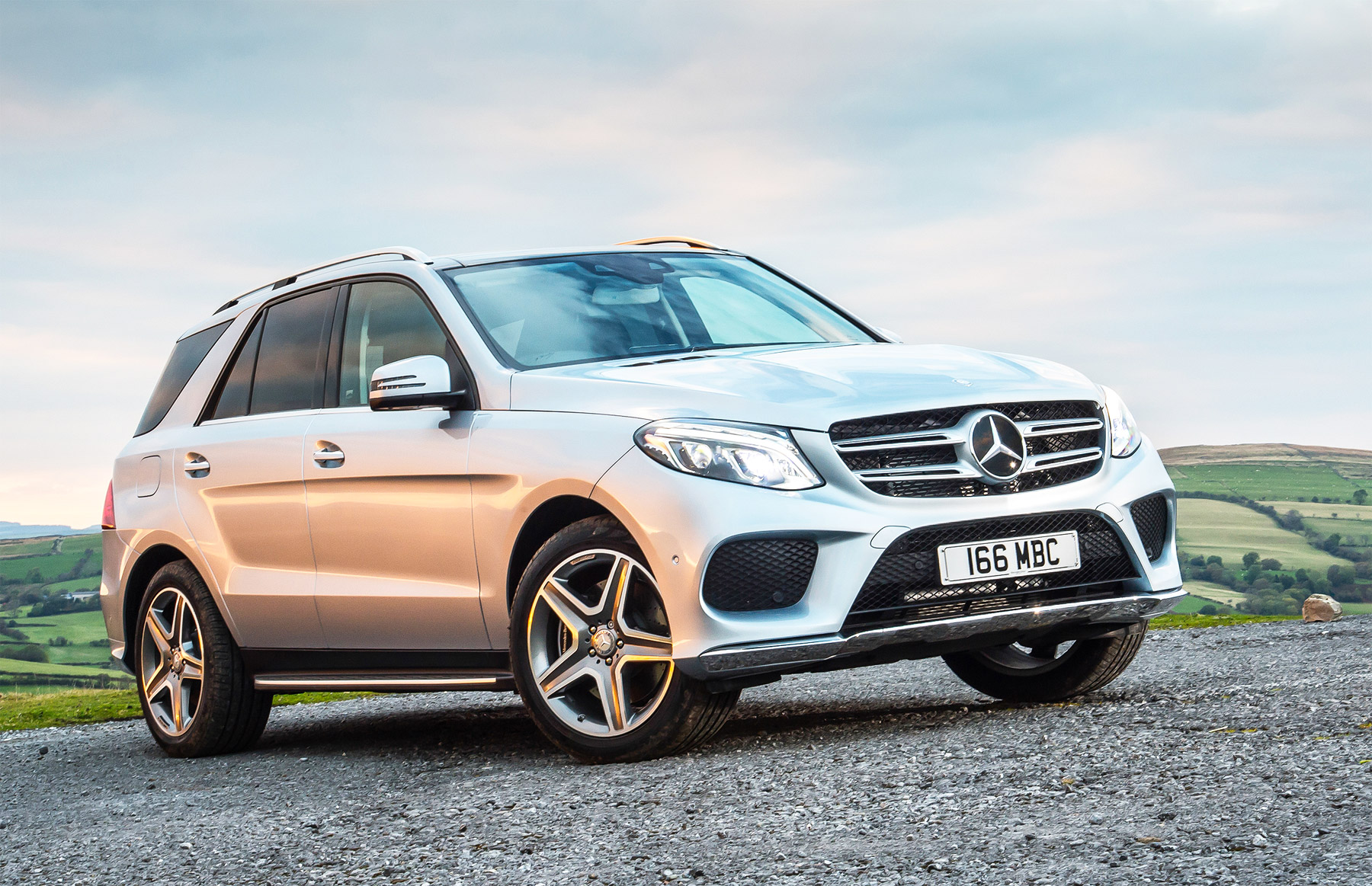 Gina Baksa climbs aboard the GLE 350d 4Matic AMG and puts this luxury Mercedes-Benz SUV through its paces.

From military beginnings in the US Army to its status as a popular luxury family car, sport utility vehicles (SUVs) are now ubiquitous the world over. And the phenomenon has reached its zenith with luxury manufacturers such as Bentley (Bentayga) and Porsche (Cayenne), producing 4WD SUV mobsters that may never see a muddy field – unless they’re dropping off the kids at Glastonbury.

Intrigued to try out this Mercedes upgrade of its best-selling M-Class SUV, I took the GLE 350d SUV 4Matic AMG Line out for a sunny drive on tarmac, which is where the majority of its drivers will be using it. Not for me, though, vertiginous Alpine passes, glamorous Amalfi hairpins or breathless descents through Norwegian fjords. This sexy SUV was driven from Waterloo’s gridlocked South Bank to leafy Hertfordshire, via the distinctly unglamorous M1, a multitude of bumpy A-roads and a bouncy selection of potholed country lanes. A thoroughly British workout for this impressive-looking M-Class replacement. 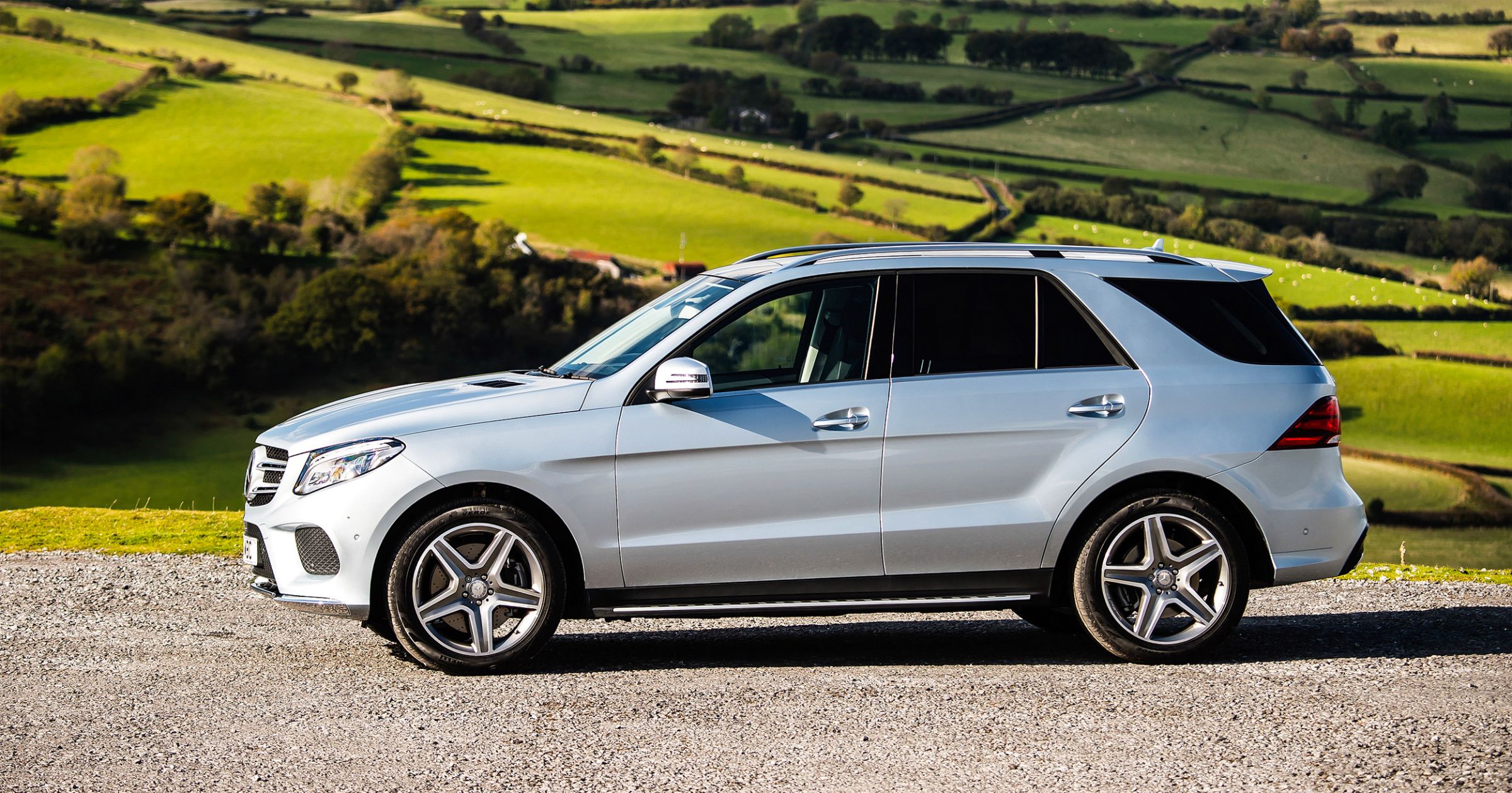 At first sight, the GLE 350d SUV AMG looks sleek and sophisticated. A dynamic profile that’s sexy and assertive from all angles, without the intimidating bulk of certain luxury SUVs on the market. Available in black or iridium silver metallic, the impressive new front styling and huge radiator grille with iconic Mercedes badge are a welcome upstyle from the previous M-Class. The new wings with arched wheel wells and a more sensual line are a great improvement, and I especially like the powerful LED daytime driving lights – yet another safety addition to the 350’s arsenal with hi-viz LED tail lights and reflectors built into the rear bumper. And for even additional safety the roof spoiler boasts an integral LED brake light.

For most female SUV drivers, many of whom will be transporting children, our priorities tend to be safety, visibility, comfort and economy. We want practical interior layouts too, since we tend to be shorter than you guys. And we really don’t care if a car does 0 to 60 in two seconds. (FYI the Mercedes GLE 350d 4Matic takes a respectable 7.1 to reach the magic six-oh.) 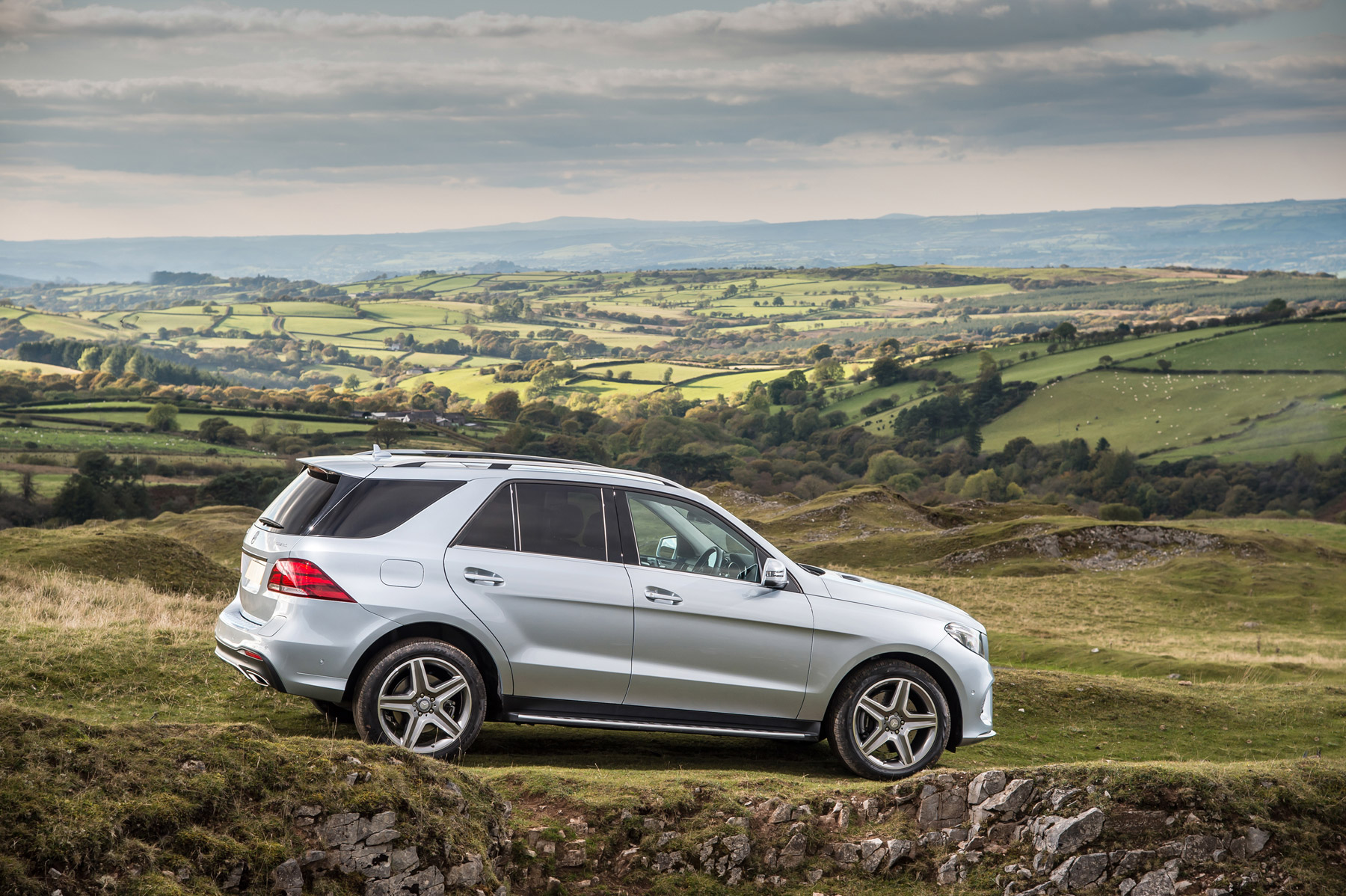 Most car reviews, let’s face it, are written by men – for men. But many women, myself included, love looking at cars just as much as you boys. And we love driving them. Top Gear (RIP) had a huge female fan base, but when the talk becomes torque, most women – me included – take our collective Choos off the gas pronto. We’d rather know if there are two cup holders in the front seat (350d tick), plenty of space for the kids and their toys (tick), (sunnies holder, tick) we can see out of the back window to park without always using the rear view cameras (tick) and a choice of comfortable seat and steering wheel positions (tick). We want to know if the interior trim and leather feel smooth to the touch (tick) and does the vehicle still feel sexy enough to drive us and our partner to a weekend of passion sans enfants? Tick. Tick. Tick, Mercedes GLE 350d 4Matic.

Not being tall of stature, I found the aluminium-look running boards with their slip-resistant rubber studs made getting in and out of the cabin – and rear seats – much easier. And they light up in the dark too, bringing some red carpet glamour to the vehicle, as well as guiding you inside under low-light conditions. 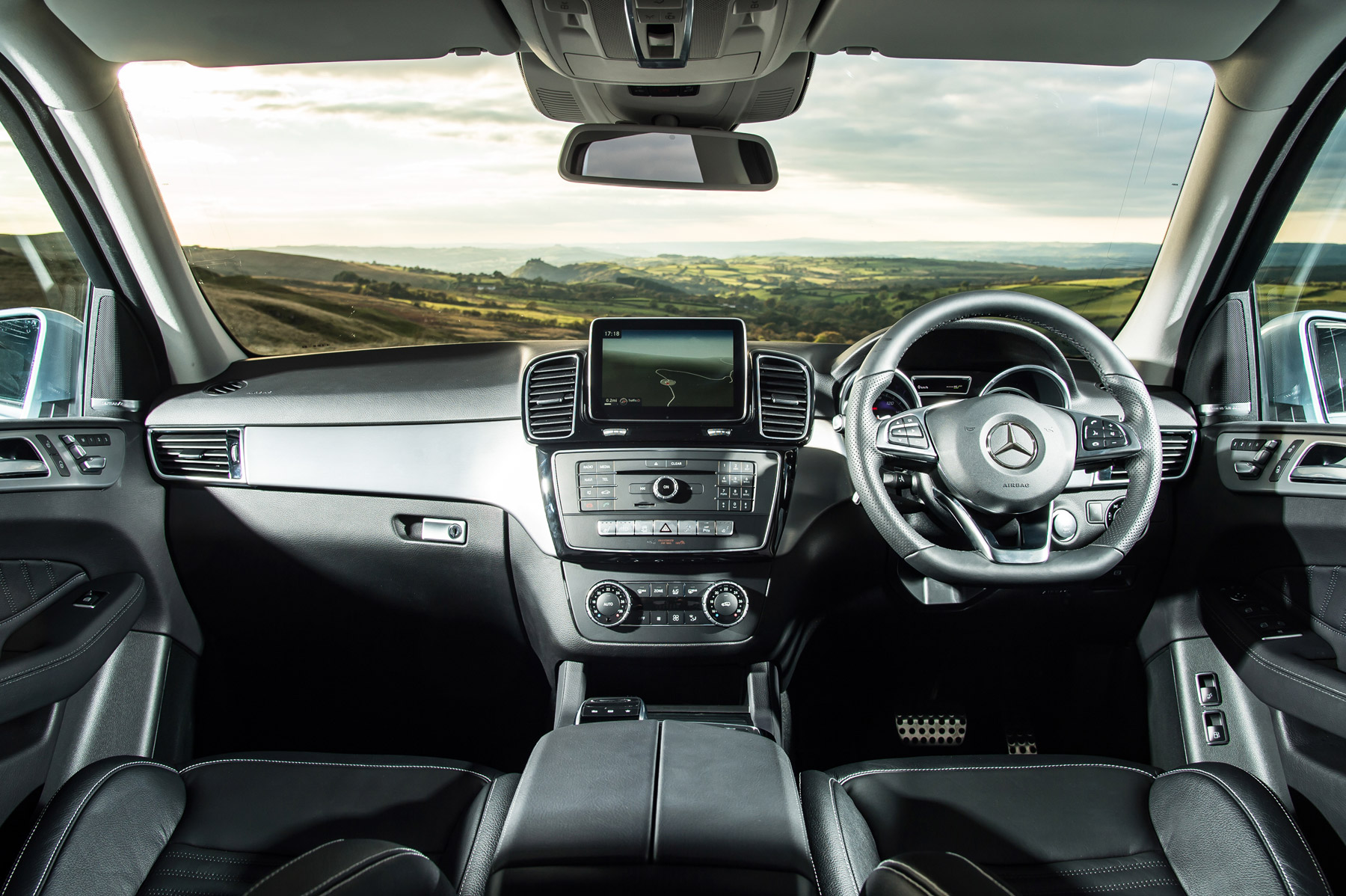 Inside the cabin, the look and feel is of the quality and sophistication you’d expect from Mercedes, with cream and black Artico leather seats and brushed light aluminium trim. I love the 3-spoke AMG sports steering wheel, bound in black Nappa leather with a perforated side grip – handy for the Lewis Hamiltons among us. (Speed freaks will be happy to hear the top speed of the speed of the 350d is 155mph).

The dashboard is easy to figure out, with the sat-nav/media display now partially integrated into the instrument panel. I love the retro-looking sports dials (digital counter is in-between) – that are apparently out of sight of your front passenger – result! The 8-inch media display would look better flush into the console, instead of its upright mini-tablet look, but that’s a minor niggle as it works well and is easy to operate with very clear sat-nav visuals including 3D buildings. Separate controls for heating and cold air for both front passengers is a genius idea and works efficiently to suit individual needs. 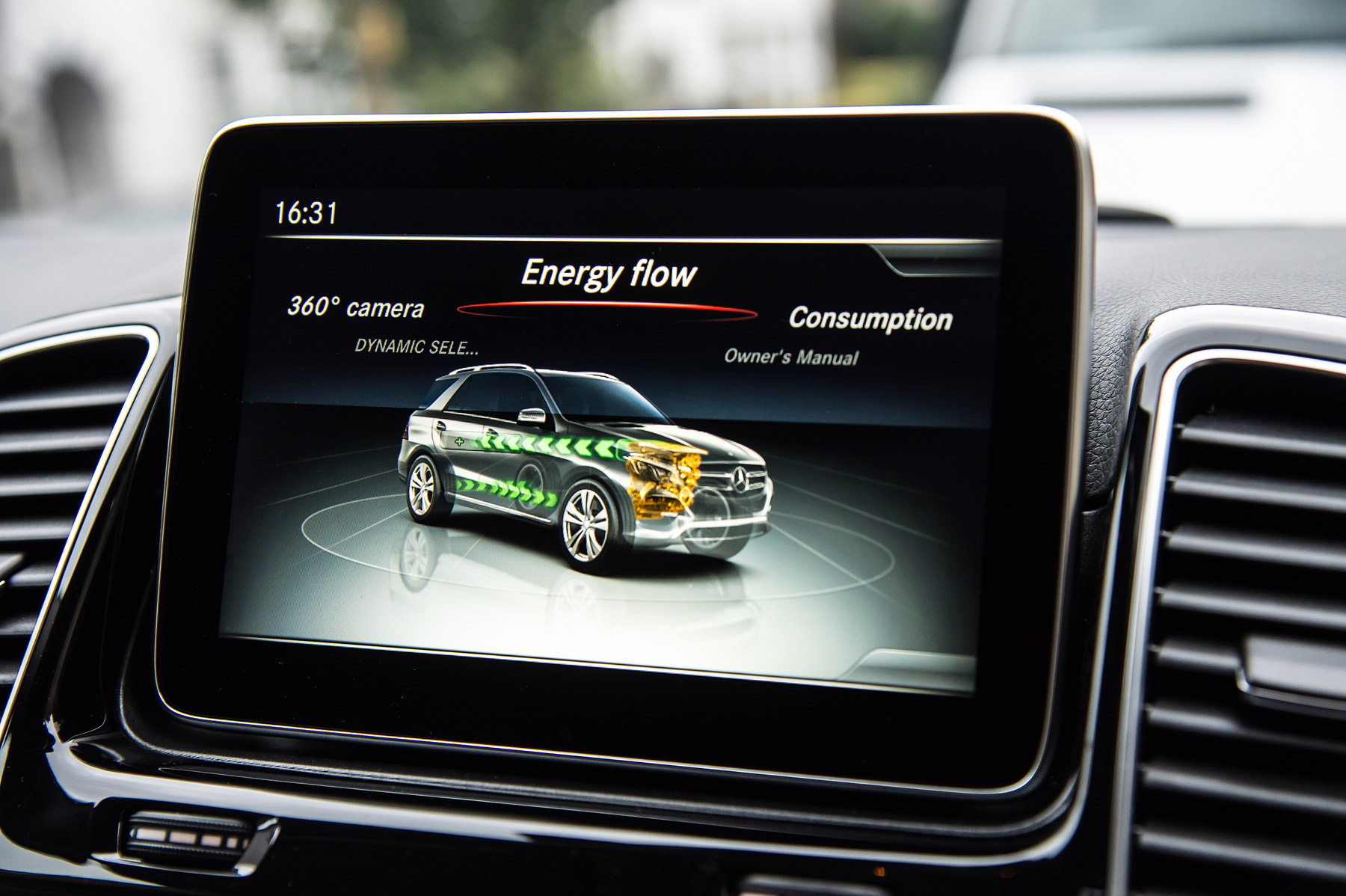 Reach down and you’ll find the command interface in the centre console, with space for phone charger, chocolate and other tempting treats, and a handy wheel that directs the infotainment choices. And for mouse lovers, there’s a touchpad above that scrolls through all the options.

The 350d GLE has a 9-speed G-Tronic automatic transmission, but purists can also use the gearshift paddles behind the steering wheel and change to manual for a more gripping, sensory ride. No key, just press the starter button. The 350d has various ride modes: choose from Individual, Sport (harder), Sport +, Comfort (better for motorways) and even Slippery (when wet). Just turn the knob in the mid seats control panel to select your choice.

And so off we roared – at a sedate 3mph – into the London traffic. Tank full of gas (approx 26.4 gallons), Adele on the Harman Kardon Logic 7 sound system (with Dolby Digital 5.1 DTS and 830 watts for you buffs out there). The base is excellent, punchy and clear + a 20-CD system) with speakers thoughtfully placed on the doors at the edge of the elbow rail.

To finally have sufficient daylight to open the sunroof was a joy (you can also tilt it back) and my passengers loved their part-glass ceiling, although it doesn’t open. If we’d been going skiing instead of a pub lunch, the handy roof rack would be very welcome for kit, as would the sunroof blind on particularly hot days. We weren’t towing during the test, but Mercedes claim that the trailer-pulling capacity of the GLE 350d is 3,500kg and has Electronic Trailer Stability Assist system that counters any fishtailing. 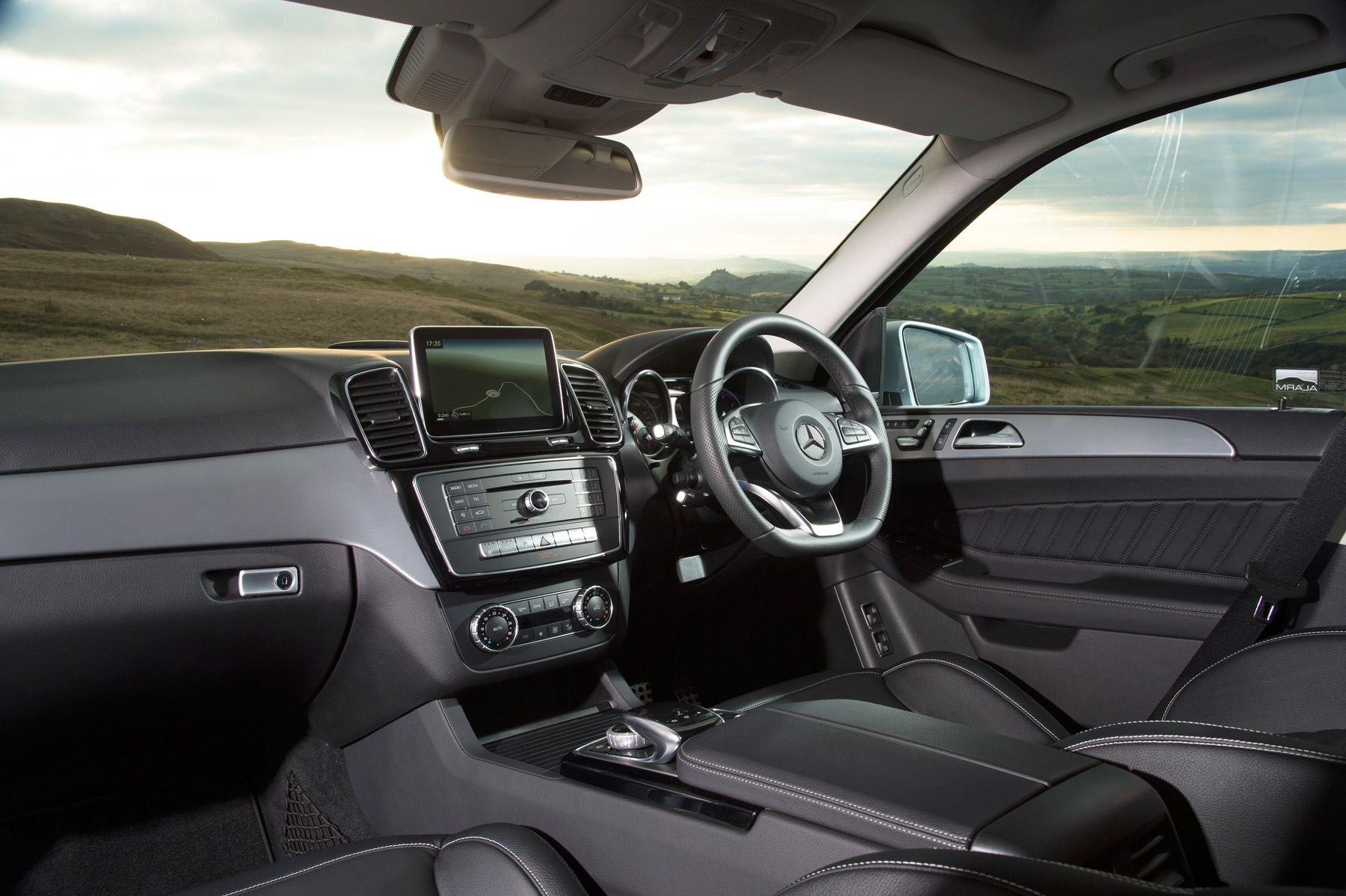 I could tell you that the 350 has 5-twin-spoke 20” AMG alloys in titanium grey, but what I’d rather share is the incredible quietness of its V6 3.0-litre turbo diesel engine and that reduced emissions now comply with EU regulations. Last time I drove a diesel was back in my old Polo TDI days, where the chug-chug was deafening. You’d hardly know you were in a diesel in the GLE 350Dd Mercedes, as with other manufacturers is only too aware of Tesla’s vision of global electrification, and so rather wisely they have launched their own Plug-In Hybrid model, the GLE 500 e 4Matic which has a combined fuel consumption of 3.31/100km and combined CO2 emissions of 78g/km.