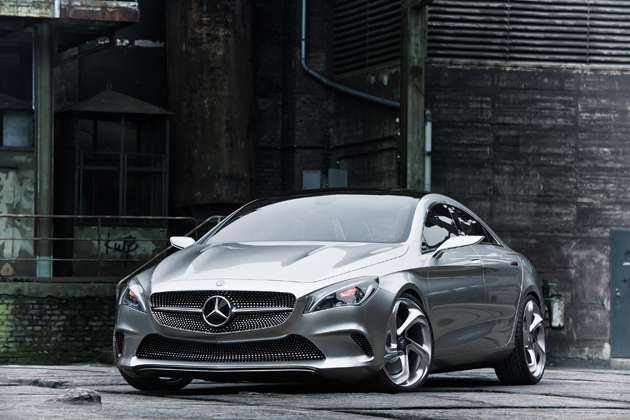 The heartbeat of a new generation grows stronger all the time: with its Concept Style Coupé, appearing at this year’s Auto China (23 April to 2 May 2012), Mercedes-Benz will be making a convincing statement in favour of avantgarde design among sporty executive coupés.

The four-door coupé is a rebel when it comes to style: nonconformist, provocative and masculine. Technical highlights include its striking headlamp design featuring innovative indicators, the new four-cylinder turbocharged petrol engine with 211 hp and the all-wheel drive system 4MATIC.

“The Concept Style Coupé is expressive and powerful in its design,” said Dr Dieter Zetsche, Chairman of the Board of Management of Daimler AG and Head of Mercedes-Benz Cars. “We are staking our claim very clearly here. This is the model against which sporty vehicles in the executive segment will have to measure themselves in future.”

“The almost production-standard Concept Style Coupé sets a new benchmark for avantgarde design in the executive segment,” emphasised Gorden Wagener, Head of Design at Mercedes-Benz. “Its breathtaking proportions, sinewy fluid surfaces and sculptural lines are the physical expression of our dynamic design idiom.”

Provocative and masculine: the exterior 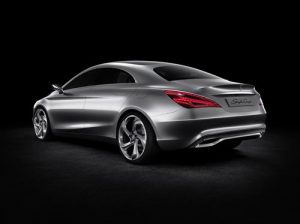 Its breathtakingly sporty proportions and powerfully dynamic design idiom, featuring the interplay between concave and convex surfaces that is so typical for Mercedes, give this four-door coupé its unmistakable look. One of the most striking features is the way the bonnet with its powerdomes is set right into the front end assembly, as well as its diamond-look grille, which follows through on design cues set by the Concept A-CLASS. The paint finish of the concept vehicle is in Alubeam – a colour that helps to emphasise the sculptural quality of its lines. The innovative headlamps of the Concept Style Coupé are reminiscent of the ever wary, almost intimidating eyes of a predatory animal. In standby mode they shine red. Another special feature is the indicators: individual points of light light up in succession, rather like a piano keyboard.

Three prominent lines give structure to the vehicle when viewed from the side: the front structural edge over the wings flows towards the rear end in a characteristic dropping line. Another, more sinewy line spans the shoulder muscle above the rear axle, while the third line extends upward in a sweeping curve from the front wheel towards the rear. Together, these lines lend more depth and dynamism to the side profile. The ripple design of the prominent exterior mirrors takes advantage of the design freedoms enjoyed by a concept car. The same is true of the 21-inch wheels, with their very sporty turbine design. Perforated pins on the spokes pick up once again on the diamond-theme of the radiator grille. The Concept Style Coupé features frameless side windows and has no B-pillar. A large panoramic roof creates a light and airy interior. A metal rib, the shape of which evokes a roll-over bar, separates the roof from the rear windscreen, which in turn flows down to merge smoothly into the tail end. The avantgarde lines of the Coupé are further emphasised by the way the tail lights, with their metallic-red colouring, taper to a sharp point both to the front and toward the rear centre. An integrated dual-flow exhaust system underlines the car’s sporty credentials and gives added width to the tail end. A narrow rear diffuser picks up again on the dotted pattern of the diamond grille. 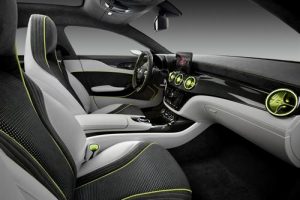 The interior opens up to reveal taut, expressively sculptured surfaces. The structure of the instrument panel is reminiscent of an outstretched wing, with a large carbon-fibre trim panel that spans its full width, giving it the elegance and distinctive appeal of a coupé. Standing proud from the instrument cluster are two tubes, similarly in carbon fibre and individually glazed. When the indicator is activated, a ring lights up in the tubes. Flowing back in a long, continuous wave from the instrument panel is the centre console. Embedded in this is an intricately designed fan module for the two rear seats, which also incorporates a stowage compartment. The world of fashion provided the inspiration for the colour mix of light grey and anthracite. A fresh, sporty touch is added by neon green piping and topstitching, which appear on the instrument panel, steering wheel, seat and door centre panels, amongst other places.

Fine materials combine with high-grade workmanship to set a new benchmark for quality. There has been no stinting on the use of leather, either: the instrument panel is upholstered in white nubuck leather, providing an interesting contrast with the anthracite-coloured Alcantara®used on the upper section of the instrument panel. Suede is used on the sports steering wheel to ensure better grip. All chrome trim elements and control panels now for the first time feature a black anodised finish, as seen on top-of-the-range limited Sports Edition chronograph watches. The surfaces around the HMI control panel have the glossy shimmer of black anodised aluminium. The four integral seats with integrated head restraints are already familiar from the Sports version of the new A-Class. An electroplated insert in the upper part of the seat adds to the impression of lightness and is illuminated. The design of the air vents in the instrument panel evokes an aircraft jet engine. As in the Concept A-CLASS they are backlit and change colour according to the temperature set by the occupants for the climate control system. When cool, fresh air is being brought into the car, they are blue, but they light up red when the airflow is warm. At a mid-range temperature setting the vents are illuminated in fluorescent yellow, and thus match the colour of the piping perfectly. 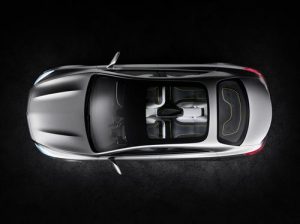 “Always on”, even in the car: the multimedia system
With COMAND Online and the various Mercedes-Benz apps developed specifically to be used and controlled while on the move, as well as with the ability to browse the internet when the vehicle is stationary, the occupants of the Concept Style Coupé are “always on” and able to maintain their digital lifestyle at all times. Mercedes-Benz is firmly convinced that the future lies with cloud computing. The software for the COMAND Online applications is not stored in the vehicle, but runs off the Daimler Vehicle Backend. The advantage is that the system can be updated with new applications “over-the-air” (OTA) through a mobile phone connection, without needing to take the car into the workshop. The software is thus always up to date, irrespective of the development cycles of either the vehicles or the consumer electronic devices.

Sportiness in tune with the times: the engine
Sporty driving dynamics coupled with exemplary efficiency are the hallmarks of the engine of the Concept Style Coupé. Powerful wheel-hub drive is provided by the 2.0-litre version of the new petrol engine generation with 211 hp, combined here with the efficient 4MATIC all-wheel drive system and the 7G-DCT dual clutch automatic transmission. Among the highlights of the four-cylinder engine are its direct-injection system with exhaust gas turbocharging, an enhanced combustion system and extended stratification ranges for lean-burn operation using fast-acting injectors for the multiple fuel injections, and multi-spark ignition according to need.