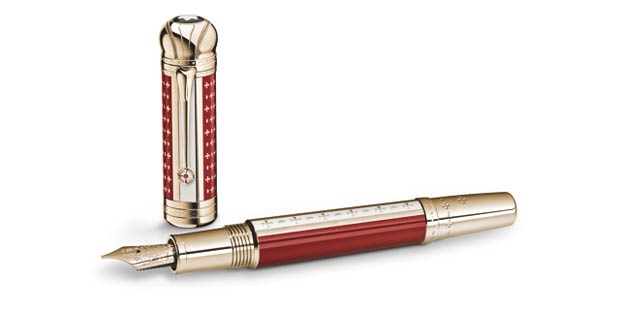 Now in its 21st year, Montblanc has recognised for over 20 years the invaluable contribution of modern day patrons of the arts in 12 countries, with its prestigious Montblanc de la Culture Arts Patronage Award. For each annual accolade, a unique Limited Edition writing instrument inspired by a historical patron of the arts is commissioned to honour the contemporary ones.

This year, Montblanc has revealed the new Patron of Art Limited Edition 4810 precious fountain pen in honour of Joseph II who was responsible for language and music reforms in the 18th Century, and in awe of the work of composer, Amadeus Mozart. He was also the driving force behind the abolition of serfdom, torture and censorship, and he imposed religious tolerance and compulsory elementary education. From a cultural standpoint, he was particularly focused on the promotion of music and languages, encouraging the arts to flourish, which led to the cultural revival of Vienna.

The Patron of Art Limited Edition 4810 writing instrument is decorated with crosses and oval beads on the cap and body, reminiscent of Austrian national colours, as well as champagne gold plated fittings and 18K nib. The clip-end is inspired by the Mother Teresa Order, and the cap ring is finished with fine engravings modelled on the Golden Fleece Kollone (symbolising the union of privileged knights).

Restricted to 4810 pieces, representing the height of the Mont Blanc mountain in metres, the Patron of Art Limited Edition 4810 fountain pen is available at a retail price of £1,720.00 in Montblanc boutiques worldwide from April 2012.