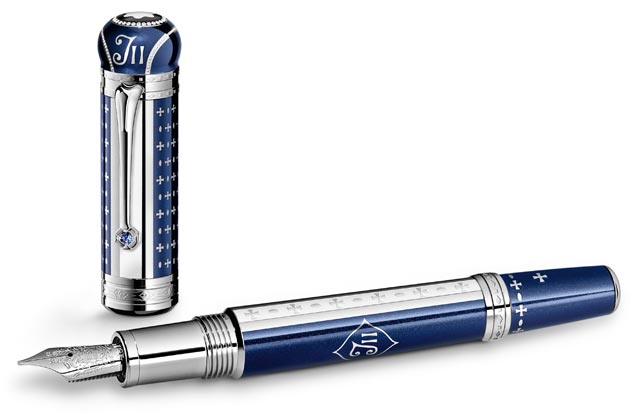 Montblanc’s Patron of Art Edition 2012 pays tribute to the outstanding legacy of Joseph II of Habsburg-Lorraine, Holy Roman Emperor from 1765 to 1790 and ruler of the Habsburg lands. 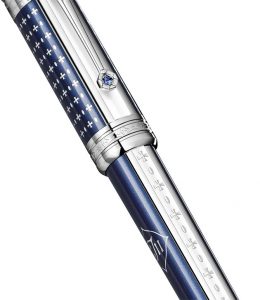 With its unique design and intricate details, this precious writing instrument is a testament to the influence of the great Enlightenment monarch on the development of arts and culture throughout Europe, and most importantly his patronage of the most famous classical composer of all time: Wolfgang Amadeus Mozart. An accomplished cellist and pianist himself, Emperor Joseph II expressed his love of music by providing Mozart with contracts for many years, until his death in 1790.

The Joseph II Patron of Art Limited Edition 888 fountain pen, priced at £6,500.00 (including VAT), and available in Montblanc boutiques worldwide from July 2012, brings to life the splendour and influence of this Holy Roman emperor and his influence as an enlightened patron. Created by master craftsmen in Montblanc’s Ateliers, the writing instrument reflects the delicate features of the imperial coat of arms of Joseph II, which can be seen as a fine engraving on the 18K rhodium-plated gold nib. The pen’s cap and body are made of white and blue translucent lacquer, on 925 Sterling silver tubes with fine 750 white gold fittings. The pattern adorning the writing instrument on both cap and body harks back to the imperial coat of arms and Joseph’s personal monogram “JII”.

As a reminder of Joseph’s status of ruler, the shape of the cap top represents his imperial crown, whilst the clip end with its single sapphire is inspired by the Maria Theresa Order, a military decoration founded by Joseph’s mother Empress Maria Theresa and awarded to soldiers as the highest honour. The cap is enhanced with fine

engravings modelled on the Golden Fleece Kollone – the collar of the prestigious Austrian order that symbolises the union of privileged knights, loyal to the emperor, under the auspices of Joseph II. To complete this masterpiece, the summit of the writing instrument is adorned with the Montblanc emblem in precious mother-of-pearl, set under sapphire-glass. 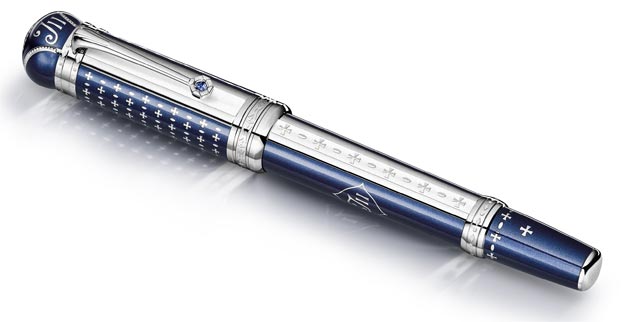