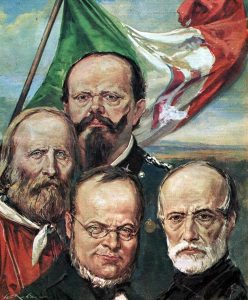 Known as a land of great antiquity, Italy possesses a glorious history that encompasses Etruscan civilisation and the Roman Empire. It played the a major role in the Renaissance. It contains the heart of the Catholic faith, and its landscape peppered with man-made structures pre-dating the dawn of Christianity. Despite this, Italy – as a cohesive country – is still young: 2011 marks only the 150th anniversary of its unification.

Known in Italian as ‘il Risorgimento,’ or ‘The Resurgence,’ it was achieved by a political and social movement that united the disparate states, in a campaign that began in 1815. It created national heroes that include Giuseppe Mazzini and Giuseppe Garibaldi. Through their efforts, Victor Emmanuel II would ascend to the throne on 17 March 1861, to become the first king of a united Italy, a title he held until his death in 1878.

Marking the century-and-a-half since his coronation is a Montegrappa pen in the colours of the definitive symbol of the united Italy, the Bandiera d’Italia, affectionately known as ‘tricolore italiano,’ or ‘Italian tricolour.’ It has come to signify Italy, a visual short-hand found on automobiles, clothing labels, restaurant menus. When one sees three vertical stripes of green, white and red, regardless of the context, thoughts turn to Italy.

It was first adopted on 7 January 1797, when Giuseppe Compagnoni decreed “to make universal the… standard or flag of three colours, green, white, and red,” colours chosen from the red and white of the flag of Milan, and green from the uniform of the civic guard. In its early form, it 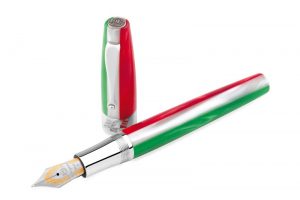 also bore an emblem composed of a garland of laurel decorated with a trophy of arms and four arrows, representing the four provinces that formed the Cispadane Republic. This banner has evolved over two centuries into its current form, which was adopted on 1 January 1948, with the spread of the Republican Constitution and the end of the reign of the House of Savoy. Article 12 of the Italian Constitution, approved by the Constituent Assembly on the 22 December 1947, states: “The flag of the Republic is the Italian tricolour: green, white, and red, in three vertical bands of equal dimensions.”

These colours adorn the commemorative Montegrappa 150th Anniversary Italian Flag pens based on Montegrappa’s iconic Extra 1930, fashioned in resin and running the length of cap and barrel. The Montegrappa 150th Anniversary Italian Flag pen will be issued in a limited edition of only 1500 fountain pens and 1500 roller balls, with silver trim. Complementing the silver edition will be a further 150 fountain pens and 150 roller balls, finished with 18K solid gold trim.

Since 1912, Montegrappa has been manufacturing high-quality writing instruments in the same historic building in Bassano del Grappa, North East Italy.