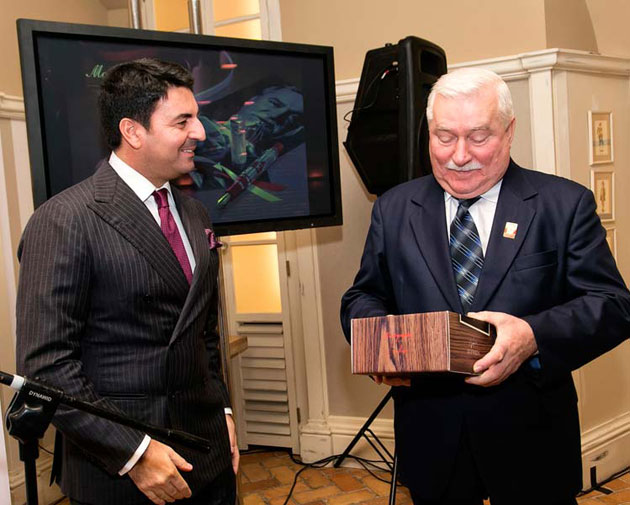 Montegrappa held a press conference on the18th November in Warsaw attended by the person it was celebrating: The former president of Poland and cultural icon, Lech Wałęsa. 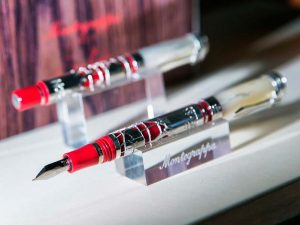 Lech Wałęsa is a fitting subject for of the debut of the series itself, a man of the stature that defines true greatness and heroic achievement. As the recipient of the Nobel Peace Prize in 1983, this extraordinary individual’s efforts led to breaking down the barrier between East and West, as well as improving life for every citizen in Poland.

Montegrappa’s designers and craftspeople have used form, colour and detail to represent a noteworthy life. Created in celluloid, embellished with detailed metalwork, the Lech Wałęsa Excellentia pen is a visual embodiment of this exceptional man and a pivotal episode in Poland’s history. The deep blood red celluloid barrel and white celluloid cap represents the colours of both Poland and of Solidarity. 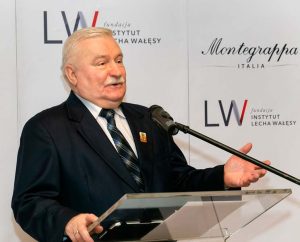 Around its base is metalwork showing the outline of the Polish shipyards where the movement was born, engraved with the word “Nobel” and the year “1983”. The contrasting white-coloured cap bears a pocket clip with an anchor drawing inspiration from the Monument to the Fallen Shipyard Workers in Gdańsk, while the cap is crowned with the Polish eagle coat of arms. The nib of the fountain pen is etched with a silhouette of the face of the great Polish leader.

This writing instrument has been produced in a limited series of 1983 fountain pens in sterling silver, corresponding to the year Lech Wałęsa was awarded the Nobel Prize, and 70 rollerball pens in sterling silver, representing his current age. 30 solid 18K gold fountain pens mark the years since Lech Wałęsa was granted the Nobel Prize, and 25 solid 18K gold fountain pens with diamonds represent the 25th anniversary of the regime change since 1989.

Montegrappa produces pens commemorating events, locales and individuals. The Papal Pen made in 2000 honoured Pope John Paul II, arguably the greatest Pole in the history. It was a unique opportunity, allowing Montegrappa to be the only company allowed to use Pope John Paul’s image and signature in connection with the pen. So, too, the importance of the Battle of Grunwald, a key moment in Polish history, commemorated by a fine writing instrument. The Montegrappa Excellentia pen for Lech Wałęsa continues this fine tradition.