For Montegrappa, the opportunity was irresistible. For a century, we have been creating the tools beloved of artists and architects, designers of 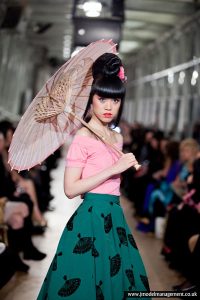 every stripe. The attraction of a fashion event in an historically important venue? “Alluring” barely describes it. As a luxury brand, especially a luxury pen manufacturer, we feel close ties to all those people who use writing implements in their activity.

The unique venue was London’s Tower Bridge. The artistry? Talented fashion designers. Jessica Minh Anh’s J Autumn Fashion Show will be remembered as the first time the iconic structure was used for this purpose. Despite the logistical challenge, at 8pm on the 19th October, 2011, Jessica Minh Anh made history by hosting the show on the 61 metre long walkway, 44 metres above the River Thames, an original and exciting backdrop to spectacular collections by 15 top designers from five continents. It has been described as “a fashion phenomenon of the decade.”

Among the featured designers were Avtandil, with a collection inspired by Leni Riefenstahl’s film, Africa. Ms Couture’s collection from Australia featured a colour palette of refreshing sorbet tones including lemon, mint, pink and lilac, the fabrics chosen to embody the colours’ delicacy. Other designers hailed from Dubai, France, Russia, the Netherlands, Viet Nam, Greece, the USA and – of course – Great Britain, inspired by cultural events as disparate as 1950s pin-up Bettie Page and 3D groundbreaker, Avatar.

As Jessica promises, “I am already planning the next big thing for 2012: a revolutionary fashion show that breaks international boundaries. I want to show the world all the incredible things that the young generation can do.” And Montegrappa will be there to support them.