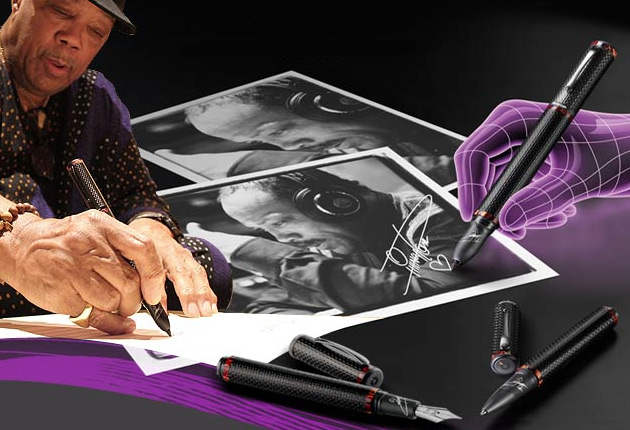 Today’s younger generation may not be too familiar with the name Quincy Jones, but for those music fans that ‘boogied’ away in the 70s and 80s, they’ll know the name and recognise his status as a legend of the music industry. The younger readers among you would probably ask ‘Why is he such a legend?’ – to start, he has been nominated at the Grammy Awards, a staggering 79 times – an all-time record and was instrumental in the mainstream success of probably (alongside Elvis Presely) the most famous contemporary recording artist in history – Michael Jackson.

Montegrappa have over the years paid homage to many of the icons of music from classical composers such as Verdi to the previously mentioned Elvis Presley. The Montegrappa Quincy Jones Pen is another prestigious acknowledgment of the man’s contribution to the world of music that sits well alongside the Commandeur de la Legion d’ Honneur bestowed by France, the Polar Music Prize and the Rudolph Valentino Award.

Now that you know about the man, let’s take a closer look at Quincy Jones Pen. As jazzy in appearance as the subject requires, the Quincy Jones pen features his personal logo in the top of the cap, an engraved, colour-enhanced “Q”. The textured barrel in black carbon is accented in the middle and at both ends with bold, multi-coloured resin rings in a marble pattern. The sleek, modernist, arched pocket clip is made of brass, terminated in Montegrappa’s rolling-ball end-piece to facilitate easy pocket ingress and egress.

In keeping with the musical theme, the end of the barrel is finished with a sculpted loudspeaker cone. For the rollerball and marker versions, Quincy Jones’ signature is engraved at the finger grip, while the solid 18K gold nib carries his signature on the fountain pen.

As with many of the brands limited edition collection, Montegrappa will restrict production to 1933 Quincy Jones fountain pens, 1933 rollerball pens and 1933 luxury markers.