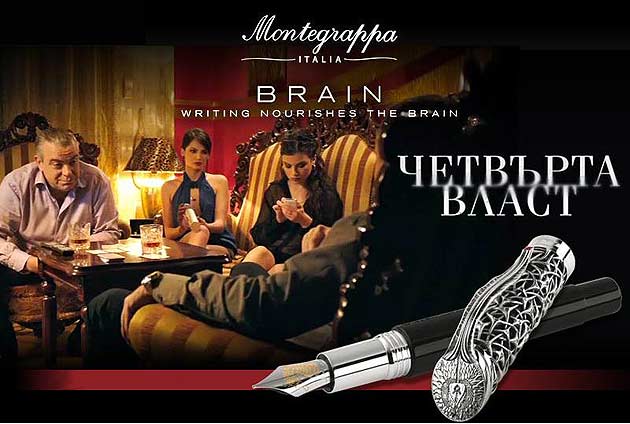 Many of you will recall the scene in Expendables 2 where the main characters are sat around a bar-room table and Montegrappa ambassador Sylvester Stallone, takes out a Chaos Pen (a pen he helped to design) and offers it to Dolph Lundgren to improve on one of Albert Einstein’s equations. Since then Montegrappa has become a major plot element in one of Korea’s top soap operas, and now, the makers of the finest writing implements in the world stars on the TV screens of Blugaria

One of the most important pen releases of the season, the award-winning Brain Pen from Montegrappa has appeared in the new TV series, Fourth Power, a political thriller broadcast on BNT (Bulgarian National Television). It earned a scene of its own, described here for your enjoyment:

Two of the main characters are playing a card game, discussing some political figures. One of the them wins the game and the other opens a luxury box and takes out the Brain pen, saying the words: “OK, you deserve it. One of the most precious pens in the world.”

The man who “wins” the pen answers: “I know, the Brain pen. It celebrates the complexities of the organ. Besides, as they say, writing nourishes the brain. Thanks!”

Trivia buffs will note that the actors in the scene with the Brain pen are Vladimir Penev, the current Bulgarian Minister of Culture, and the other is Hristo Shopov, famous for his role as Pontius Pilate in the movie The Passion of The Christ, directed by Mel Gibson. 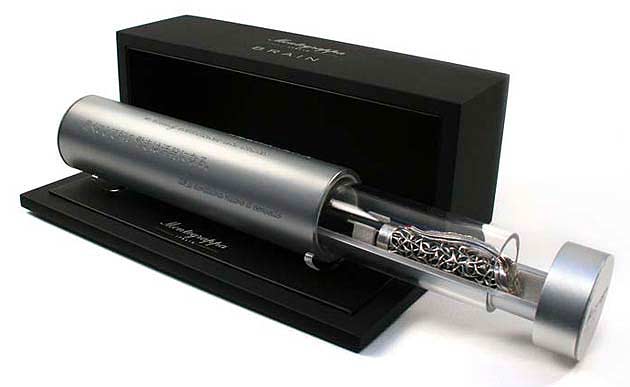 Winner of the 2013 Reader’s Awards for Best Metal Mastery and Best Interpretation of a Theme from Pen World Magazine is a collaboration with renowned authority on cerebral matters than Dr. Richard Restak, M.D., the author of more than 20 books on the subject. Represents the complexities of the very organ it celebrates, the pen’s most basic structural elements act as a parallel to a human being’s body: the pen’s body is simple, while the top part of the pen is rich and elaborate, as in the brain itself.

Adorning the top of cap is a cross-section of the brain, based on an ancient illustration. The cap features an overlay made up of neurons, with the pocket clip representing the spinal cord. The clip has a spring-loaded mechanism and its tip is lacquered in red or black, to differentiate the fountain pen from the roller ball.

Clearly, the characters in Fourth Power know their pens!