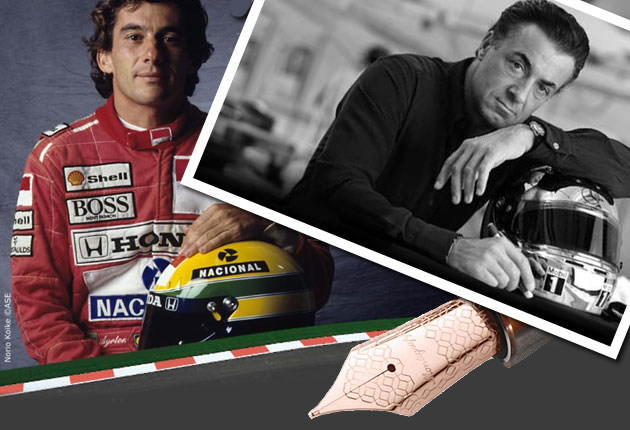 For those that have followed Formula One over the years, the name Ayrton Senna should conjur up images of a swashbuckling, handsome driver that thrilled millions of motorsport fans around the world with his passion and supreme skill.

It was back in May 1994 when the world lost the three time world champion due to a tragic crash during the 1994 San Marino Grand Prix. The death of Senna forced the motorsport authorities to review driver safety and this review resulted in many improvements including improved crash barriers and redesigned race tracks. Some of you may be wondering what the connection is between the motoring legend and Montegrappa, this can be answered with another legendary name from the world of Formula One – Jean Alesi.

It was back in 2009 that Jean joined Montegrappa as a shareholder and member of the board for public relations, which has allowed the racing legend to address, as he puts it, his “passion for all things hand-made.” As a consultant with design input, as well as an ambassador for the brand, Jean is, “for the first time, in a business which is not a racing business!

He commented “I am happy and honoured to be associated with a company that is over 100 years old … and Italian!”

To honour Senna, in the year that marks the 20th Anniversary of his legacy, Montegrappa will issue a series of pens that encapsulate his spirit and his style. The Ayrton Senna Icons pens will be offered as fountain pens, roller balls and ballpoints in jet-black resin, in a series of 1960 pieces each to mark the year of his birth. A solid sterling silver edition with cap and barrel engraved in low-relief will be available in a limited edition of 610 examples each as fountain pens and roller balls, representing his tally of championship points. To complete the collection, there is an exclusive solid gold version comprised of 20 fountain pens and 20 roller balls, which represent his career of 20 years as a racing driver.

A colleague, personal friend and competitor who raced against Ayrton Senna, Jean Alesi has kindly offered to join the two worlds of Formula One and Montegrappa at this special event.  Embodying the best elements of both the Italian and French zest for life, Jean is blessed with natural driving ability. The young Alesi started his career in karting, graduating to single seaters and winning the 1987 French Formula 3 title. Two years later, in only his second season in International F3000, he would capture the championship. His Formula One debut took place in the 1989 French Grand Prix at Paul Ricard, driving a Tyrrell-Cosworth, finishing fourth and scoring points in that year’s Italian and Spanish Grands Prix.  It was the start of a long, colourful and eventful career, with a win at the 1995 Canadian Grand Prix in Montreal on his 31st birthday. In 2001, Jean became only the fifth driver to start 200 Grand Prix races, achieving thirty-two podiums. In 2007, he was knighted by Jacques Chirac, as a knight of the French National Order of the Legion of Honour (“Chevalier de la Legion d’honneur”).