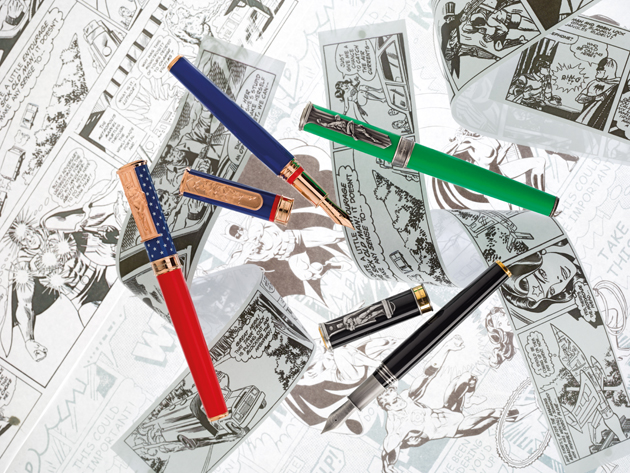 Many of the people that we interact with on a daily basis grew up with super heroes, let’s face it, almost every one of us has a favourite comic book character. Take our publisher Paul Godbold, he’s crazy about Superman, inside his plush wood paneled office are works of art and memorabilia, but taking pride of place is a four feet high statue of the Man of Steel. I recall him saying a couple of years ago after Montegrappa unveiled their wildly successful Batman Pen Collection, “It’s nice, but I wish they did a Superman version”. Although it has taken slightly longer than expected, it’s here alongside many other of DC Comics most iconic heroes and villains.

This new collection called “DC Comics Heroes & Villains” consists of four pens for four characters in each category. All will be offered as fountain, rollerball and ballpoint pens. The initial roster of heroes chosen consists of Superman, Woman Woman, Batman and Green Lantern, the four villains chosen are strangely enough all Batman enemies at one time of another – Joker, Penguin, Catwoman and The Riddler. Each of the pens boast an evocative design, in each hero’s or villain’s signature colour scheme.

I called Paul Godbold and asked him what he thought of the heroes and villains chosen “Personally, they should’ve gone with a Lex Luthor pen on the villains side instead of the Riddler, and I’m keeping my fingers crossed that we’ll see SHAZAM in the next collection”. 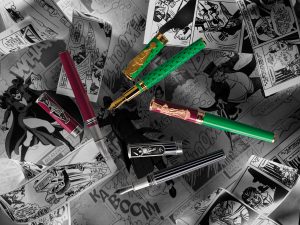 For the villains, each has his or her special features represented as well, with full height figures engraved on the pocket clips: for The Joker, the combination of purple cap and green barrel convey his lurid attire, with his grinning face adorning the cap. Catwoman is honoured with a dark purple pen with her ‘cat’s eyes’ logo topping the cap, her pose as feline as one would imagine. The Penguin, naturally, commands a black pen with the very pinstripes that adorn his trousers, the villain posed on the clip with umbrella held aloft, and the umbrella logo gracing the cap’s top. The all-green pen celebrating The Riddler boasts a question mark on the cap’s top and the same inquisitive punctuation all over the barrel and cap.

The low indicative pricing for the DC Comics Heroes & Villains Pen Collection should make this collection a winner, and will be an excellent spring-board for pen and comic enthusiasts to become part of the Montegrappa Universe.