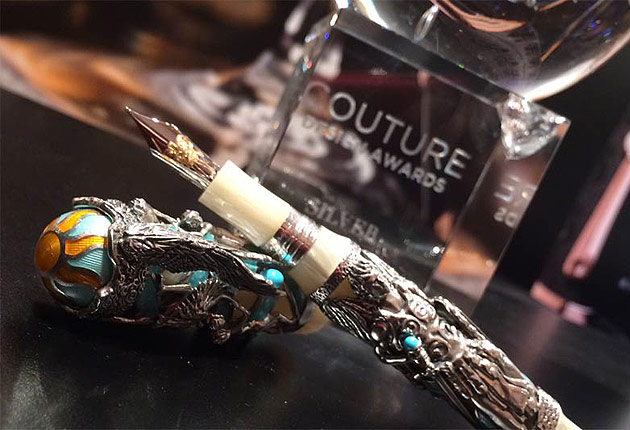 Even to the untrained eye, the skills of the Montegrappa silversmiths are evident to all. Over the recent years Montegrappa has produced exquisite writing implements of such magnificence that collectors and well known personalities around the world have snapped them up.

One of their recent creations was the ‘My Guardian Angel’ collection of writing implements, this intricately designed pen was regarded highly enough to be awarded the Sterling Silver design category at Couture Design Awards in Las Vegas.

This honor is particularly meaningful to Montegrappa, as it is recognition of a century’s mastery not only of pen manufacturing, but of artistic skills associated with jewelry, gem setting, enameling, painting and engraving. During its first 100 years, Montegrappa was the choice of writing instrument for authors including Ernest Hemingway and John Dos Passos. A Montegrappa pen affixed signatures to key historical documents, including the handing over of power in Russia by Boris Yeltsin. These aspects of Montegrappa’s history have earned it the status it enjoys as Italy’s greatest – and oldest – pen manufacturer.

Held annually at the luxurious Wynn Resort, Couture is the most exclusive and intimate destination for the luxury jewelry and timepiece market. Hosting renowned heritage brands, emerging design talent, the finest retailers and award-winning media from around the globe, Couture attracts more than 4,000 top-tier buyers from the world’s most distinguished retailers, including Bergdorf Goodman, London Jewelers, Reinhold Jewelers and Neiman Marcus. In 2013, it was the only venue in the United States to present an exquisitely curated collection of more than 200 preeminent designers and brands, from Bulgari to Bell & Ross, David Yurman to Dodo and Stephen Webster to Sevan Bicakci.

Montegrappa CEO Giuseppe Aquila, commented: “It is rewarding not only for Montegrappa to be honored by Couture Las Vegas, but for our designers, engravers, enamellers, and every other craftsperson involved in creating a writing instrument as complex as My Guardian Angel. We are delighted that the entire team’s efforts have been acknowledged by so prestigious an accolade.”