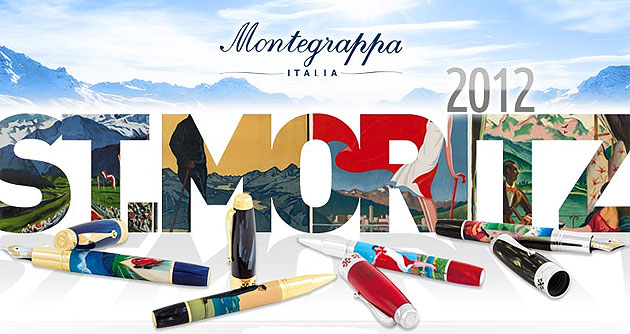 Montegrappa, Italy’s most revered manufacturer of fine writing implements, has captured the spirit of St. Moritz in a series of luxurious pens.

The hand-crafted Montegrappa St. Moritz fountain pens and roller balls are apt representations of both the village itself and the aura that surrounds it. For 2012, a new quartet of pens has been introduced, in the tradition of the previous series, now highly collectible.

St. Moritz is like no other resort, for it has come to symbolise all that a Swiss destination should be: genteel and refined, exclusive yet welcoming. So great is the impact that St. Moritz has had on the global consciousness, since it first welcomed skiers nearly 150 years ago, that it has grown to be both cinematic and literary “shorthand” for luxurious getaways.

Located in the Engadin valley, St. Moritz first attracted visitors and functioned as a proper resort in 1864, when hotelier Johannes Badrutt made a wager that would resonate forever throughout Switzerland. His bet with four British summer-season visitors proffered that, should they return in winter and not find it as pleasurable a vacation as their warm weather sojourn, he would pay the cost of their round-trip. It was a win-win situation for them, as he also offered to pay for their visit, to stay as long as they wished, if they did find St. Moritz to be attractive in winter. That example of genteel gamesmanship not only established St. Moritz as a ski resort, it also launched the Alps on the whole, as a destination for vacationing skiers.

Over the years, St. Moritz would host the first European Ice-Skating Championships (1882), the first golf tournament held in the Alps (1889), a horse race on snow (1906) and the opening of Switzerland’s first ski school (1929). It has twice hosted the Winter Olympics – in 1928 and 1948 – as well as over 30 Bobsled World Championships, four Alpine Ski World Championships and numerous 40 Engadin Ski Marathons. So rich is St. Moritz’s winter sport heritage that it now exemplifies the Swiss sporting vacation ethos.

As far back as 1934, Alfred Hitchcock used it for the opening scenes of The Man Who Knew Too Much, while it was cited exactly 30 years later in the James Bond film, Goldfinger, and referred to in 1981’s For Your Eyes Only. Bond’s creator Ian Fleming clearly knew a good thing when he found it: locations near St. Moritz also served as headquarters for the villain Blofeld in the novel, On Her Majesty’s Secret Service. Most romantically, singer-songwriter Peter Sarstedt listed St. Moritz amongst the elite locales in his immortal “Where Do You Go To My Lovely”, its mere mention conveying haute monde elegance. 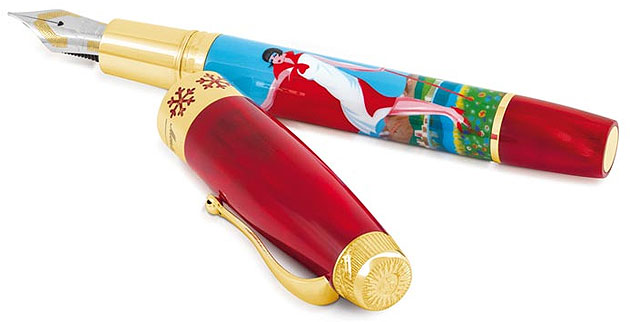 But St. Moritz supports much more than skiing, golf and other leisure pursuits. Every year, this town welcomes the arts, celebrated with exhibitions, seminars, walks and other attractions. The St. Moritz Arts Masters is an annual gathering of artists and collectors, experts and critics, presenting a rare opportunity for the public to savour the art world in all of its aspects, in a breath-taking Alpine environment.

It is fitting, then, that the representation of the village be both a tool an artist might use – a pen – and an objet d’art embellished with visual representations of St. Moritz itself. To decorate the pens’ barrels, Montegrappa’s designers have chosen four historic posters redolent of St. Moritz’s charms, each image hand-painted by artist Lorena Straffi. The pens are fashioned from celluloid, a costly material made from cotton fibre mixed with natural pigments and mother-of-pearl, and are further adorned with either sterling silver or 18K gold.

Each of these special themes is represented by period posters of timeless appeal:

Your Montegrappa St. Moritz pen will serve as a permanent, evocative reminder of Switzerland’s jewel of a resort every time it touches paper.