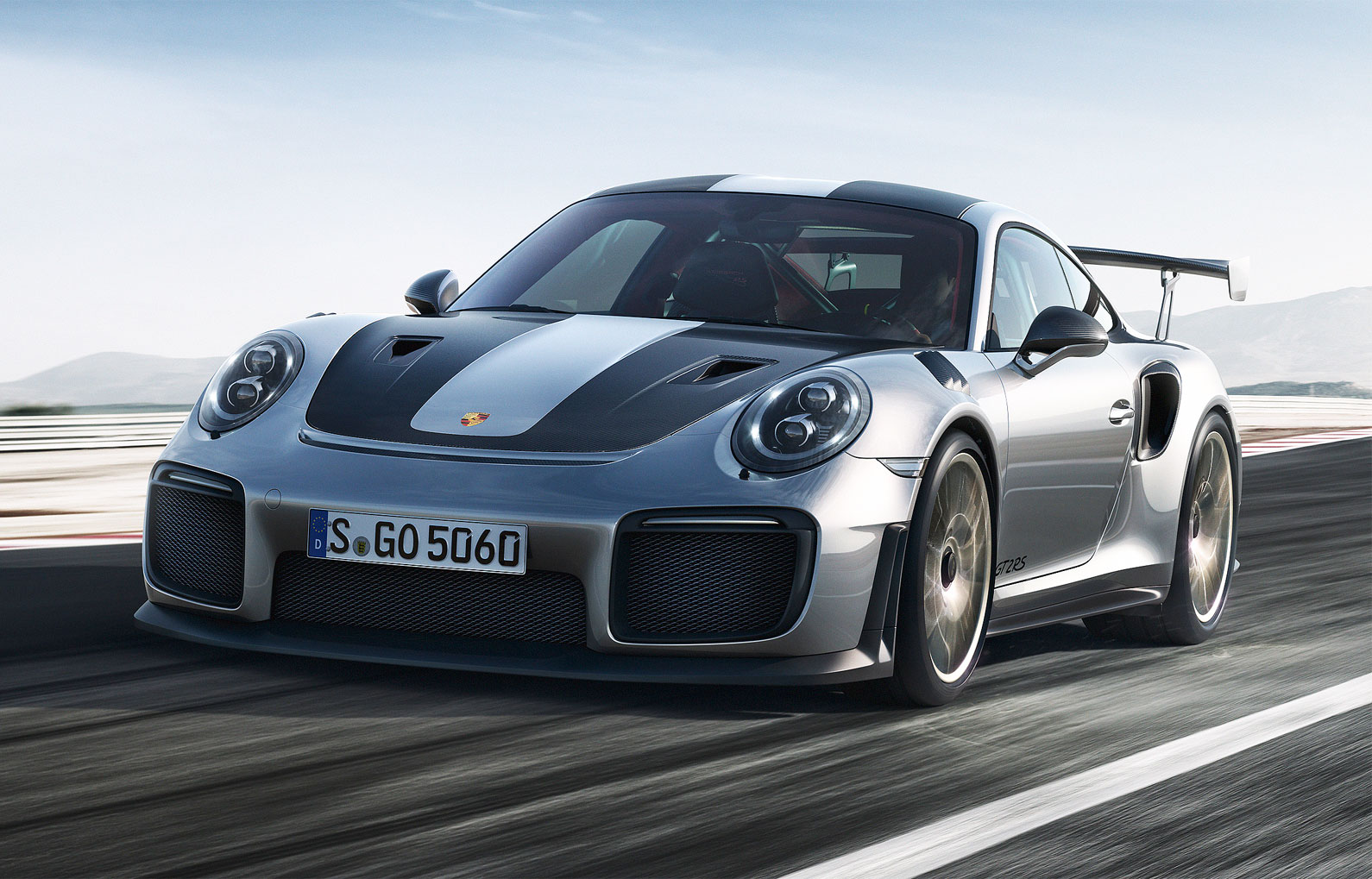 The new Porsche 911 GT2 RS, the fastest and most powerful road-approved 911 ever made by the German manufacturer

The customised GT seven-speed double-clutch transmission (PDK) in the new GT2 RS enables power to be transferred with uninterrupted traction. What’s more, the specially developed exhaust system is made from extra-lightweight titanium, weighs around seven kilogrammes less than the system used in the 911 Turbo and delivers an emotional sound without precedent.

Discipline in sport means mastering every detail. And in the world of super sports cars, cornering speeds are on another level. The 911 GT2 RS reaches these speeds thanks to its flawless racing chassis with rear-axle steering and Ultra High Performance (UHP) tyres. 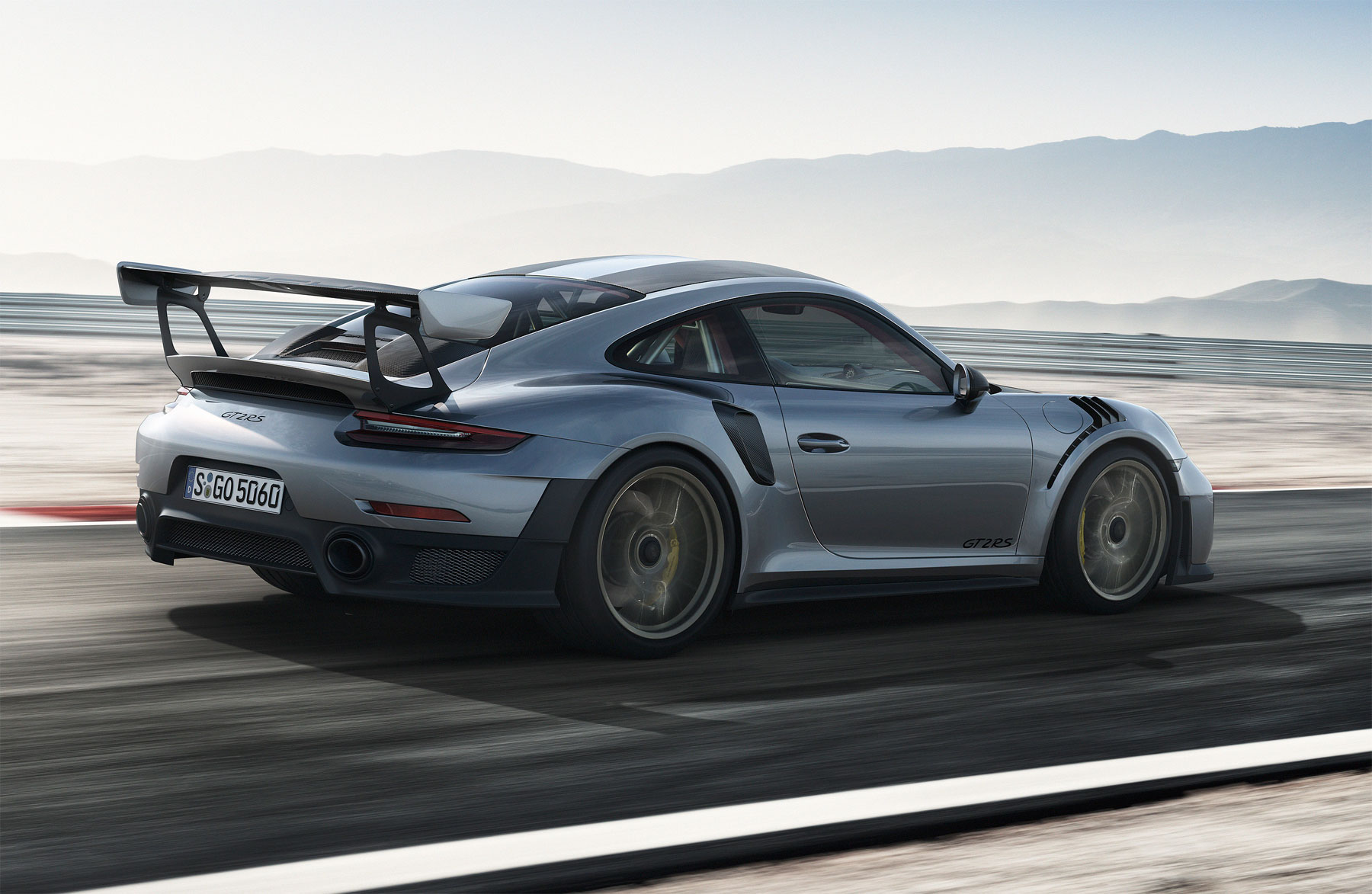 Like all GT sports cars, the new top model features a specially calibrated PSM with a Sport mode that is tailored to provide optimal driving dynamics. Powerful air intakes and outlets and the imposing rear wing emphasise that the vehicle’s aerodynamics have mastered both form and design. The large, wide wheels (265/35 ZR 20 at the front and 325/30 ZR 21 at the rear) ensure outstanding braking and cornering forces. The 911 GT2 RS features Porsche Ceramic Composite Brakes (PCCB) as standard. The front wings, wheel housing vents, outer shells on the Sport Design exterior mirrors, air intakes on the rear side sections and parts of the rear end are made from carbon-fibre reinforced plastic (CFR), as are many of the interior components. The bonnet is also made from carbon to make the vehicle as lightweight as possible, while the standard trim roof is made from magnesium. Both body parts have a wide lateral swage line. 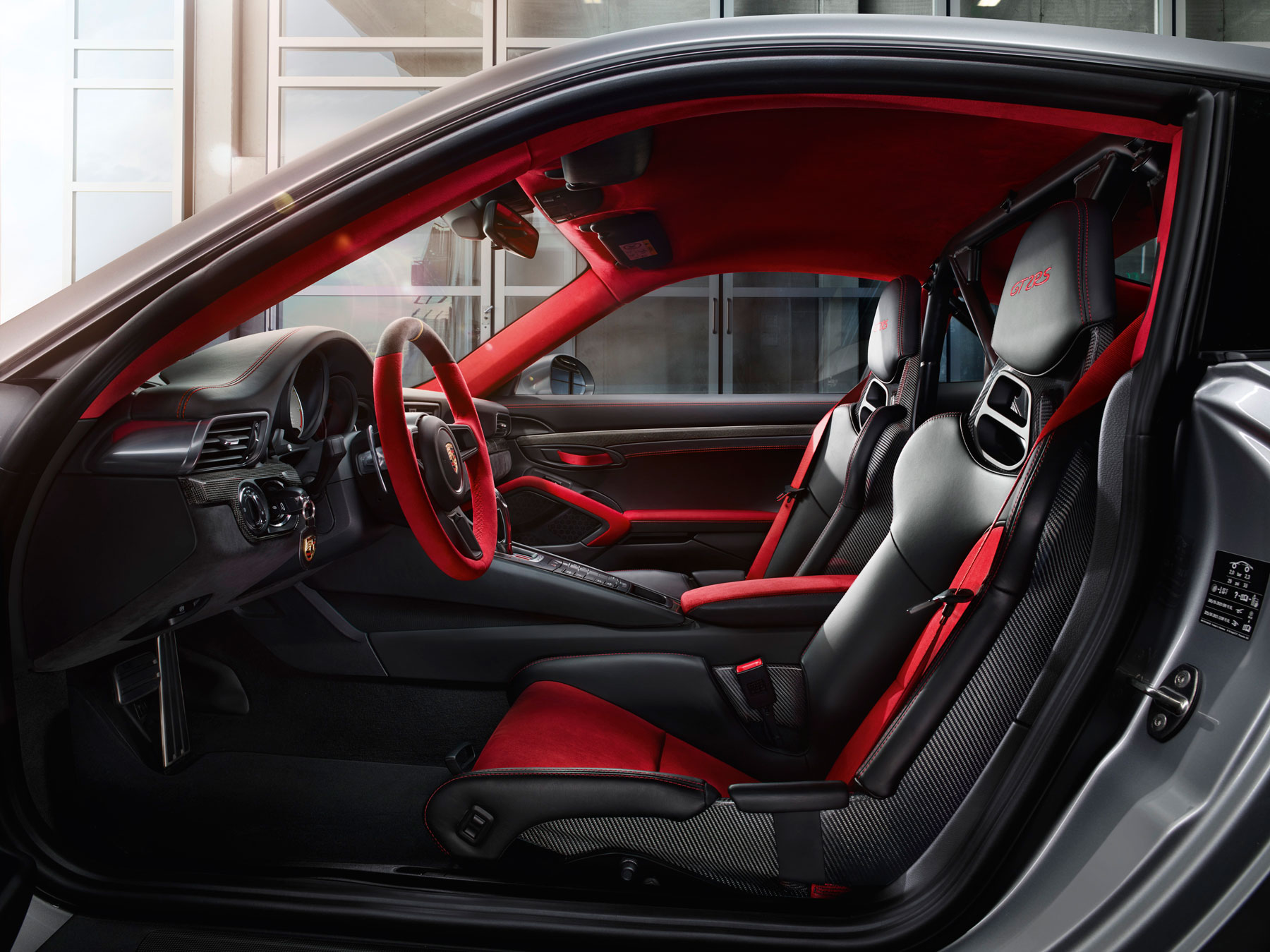 The passenger compartment of the 911 GT2 RS is dominated by red Alcantara, black leather and interior parts with a carbon-weave finish as standard. The GT2 RS sports steering wheel with gearshift paddles enables quick and sporty gear changes. Drivers and passengers experience the driving dynamics of the high-performance sports car in full bucket seats with a carbon-weave finish. As in every 911, the Porsche Communication Management (PCM) is the central control unit for audio, navigation and communication. The Connect Plus module and Porsche Track Precision app are also included as standard, enabling detailed recording, display and analysis of driving data on a smartphone.

The optional Chrono Package expands the PCM functions to include performance display, which can be used to display, save and evaluate track times. The package also includes a stopwatch on the switch panel with both analogue and digital display. What’s more, the Chrono Package on the 911 GT2 RS comes with a lap trigger. Using the Porsche Track Precision app in conjunction with external markers on a start/finish straight, this lap trigger enables drivers to record lap times with a high level of precision. 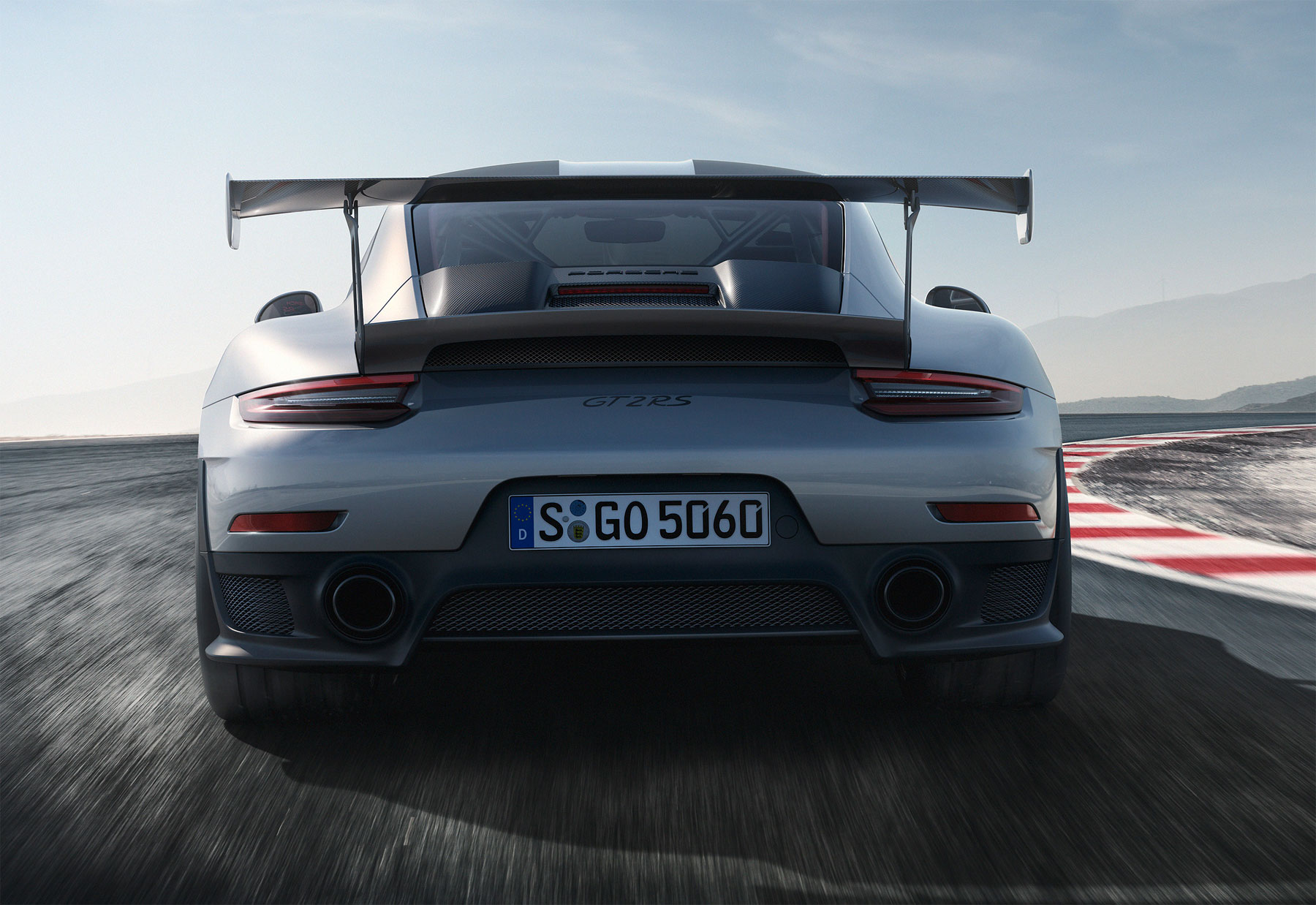 Owners of the new 911 GT2 RS can spec the optional Weissach 30-kg weight saving package costing an extra £21,042. The package includes additional elements made from carbon-fibre reinforced plastic and titanium. For instance, the roof and the anti-roll bars are made of carbon, and so are the coupling rods on both axles.

Magnesium wheels reduce both the gross weight and the unsprung weight, providing a greater wealth of impressive chassis properties. The luggage compartment lid and the carbon-weave finish roof are emblazoned with a central strip in the same colour as the car for a visually distinctive look.

One to watch….
For the first time ever, Porsche Design is celebrating the debut of the high-performance sports car by releasing a special issue watch named the 911 GT2 RS Chronograph. Costing a cool £8,250, it is available exclusively to owners of the new vehicle and can only be ordered in conjunction with the new GT model at a Porsche Centre. 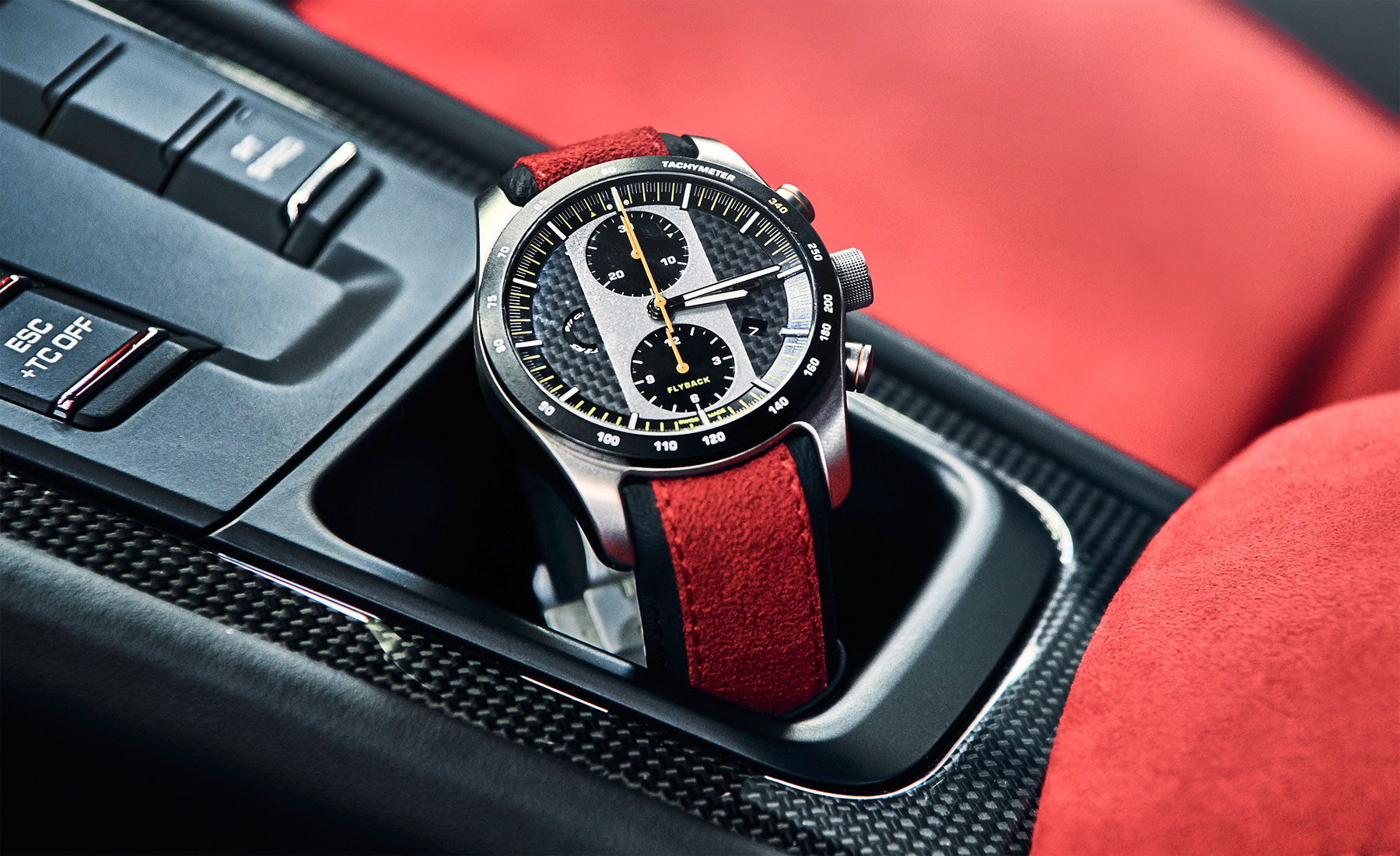 At its heart is the first clock movement developed by Porsche Design, the product of three year’s work. The calibre 01.200 includes a flyback function, a load-path-optimised movement bridge and an official COSC certificate of authenticity. The timepiece housing is made of lightweight titanium.

The flyback function is inspired by motorsport and represents a special feature of the Porsche watch.

On a traditional chronograph, the buttons must be pressed three times in order to measure consecutive time intervals: The first press stops the chronograph, the second reset it and the third restart the measuring process. On chronographs with a flyback function, these processes happen automatically and in rapid succession. The stop function and the ongoing time display are clearly separated using yellow markings. Many of the details on the timepiece are based on the high-performance sports car. The tungsten winding rotor is modelled on the rims of the 911 GT2 RS. The clock face is made of carbon, while the design of the time display matches the instrument cluster and the tachometer.