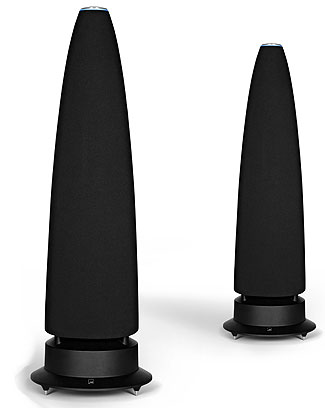 Designed and assembled by hand at the company’s Cambridgeshire headquarters, the contemporary design of the Meridian M6 loudspeaker showcases the company’s original design ethos of creating the best sounding loudspeakers in a form that complements a customer’s home environment. Matched with the highly acclaimed Meridian Audio Core 200, the Meridian M6 loudspeaker creates a complete discreet high-end audio system that is simple to use, easy to live with, and accessible to the whole family.

Price and availability of the Meridian M6 Loudspeaker

The Meridian M6 loudspeaker, which are priced at £4,500 or $9,000 per pair, and available from next month, showcase a striking design approach in combination with unique Meridian technologies that allow a level of performance that is unsurpassed by traditional speaker designs. The gently tapered column that creates the enclosure of each Meridian M6 loudspeaker is formed from a specially developed, barium-doped resin. Uniquely heavy and rigid, it is precision moulded into a complex form – impossible to achieve using traditional manufacturing materials and techniques. The same cylindrical enclosure gives the Meridian M6 loudspeaker a naturally wide dispersion pattern, filling the room with natural sound that can be enjoyed from any position, offering flexible placement options and a sound that does not significantly vary in volume as you move closer to or further away from the loudspeakers. Digital Signal Processing (DSP) throughout delivers traditional Meridian benefits, including a level of performance matching that of a conventional loudspeaker with eight times the physical volume.

Following the rapid expansion of Meridian into the automotive sector in 2011, Meridian sound systems are now available in the award-winning three and five-door Range Rover Evoque models, as well as the cutting-edge McLaren MP4-12C supercar. The launch of the Meridian M6 loudspeaker marks the beginning of a significant year for Meridian who currently retails their products in 56 markets across the globe.

The company’s founders, Bob Stuart and Allen Boothroyd, are to be celebrated at a major new design exhibit later this year. To coincide with the Olympic Games in London in 2012, the Victoria and Albert Museum is launching a major exhibition ‘British Design 1948-2012: Innovation in the Modern Age’ showcasing British leadership across all design disciplines. Boothroyd and Stuart’s rare and legendary Lecson audio system designed in 1974 will be on display. A much sought after item by collectors, the system is one of just 50 made worldwide while another one is in the permanent collection at the New York Museum of Modern Art (MoMA).

Visit www.meridian-audio.com for more information on the Meridian M6 Loudspeaker