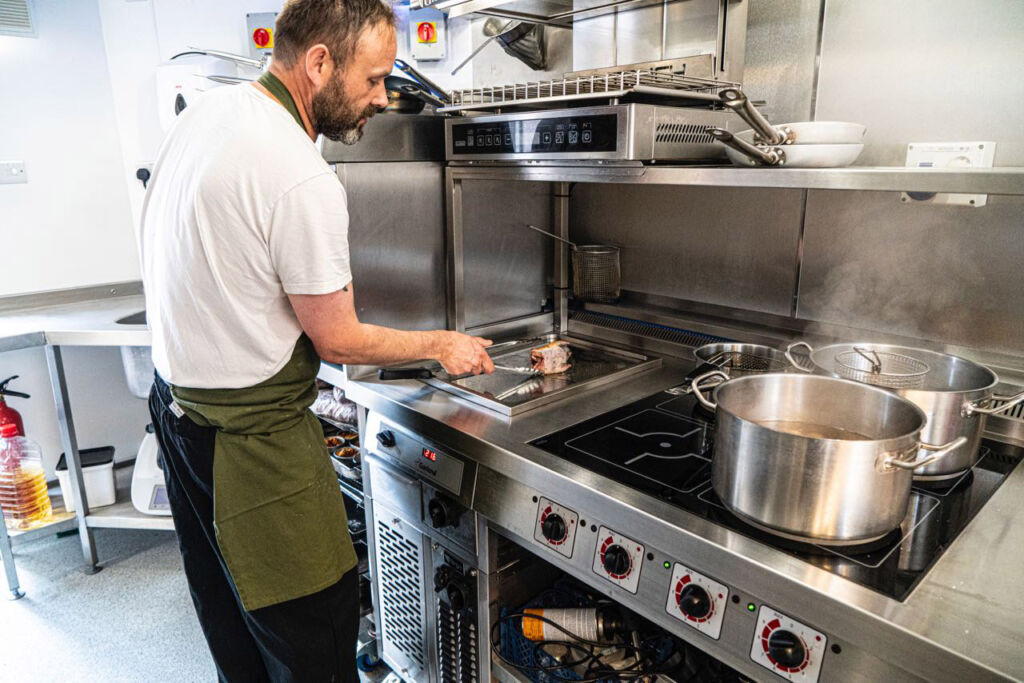 A newly launched Hertfordshire Bistro is hoping induction cooking will be the difference when it comes to making guests warm to its contemporary offering based on classic British and European cuisine.

The Arbury in Baldock, which opened its doors just a few months ago on a derelict former Greene King pub site, has turned to induction to deliver food for its 40 covers; opting for induction cooking technology over gas as it bids to speed up the cooking process.

Martin Nesbitt and partner Lucy Thompson, the pair behind The Arbury, made an inquiry to bespoke commercial kitchen specialists, Target Catering Equipment, about the possibility of introducing induction cooking into their new restaurant, having previously worked with gas.

Convinced by the subsequent conversations and a visit to Target headquarters, The Arbury turned to the Target team for a full kitchen fit-out, including the installation of an induction stove complete with induction solid top, induction plancha, fast action salamander grill, extraction system, and bespoke fabrication of service hot pass, shelves, dishwasher sinks and tabling.

The whole kitchen was fitted and completed in July 2019, and in the months the bistro has been open, Martin, who operates as effective head chef, pot washer and everything in between, has been experiencing the operational and financial benefits of induction first-hand.

“The power that induction offers is phenomenal,” said Martin. “I don’t have to leave things switched on and can now do things instantaneously so, therefore, the ambient temperature is significantly less.

“I went for induction as it’s the way the modern world is heading, and I wanted to use renewable energy. Also, it’s far more pleasant to work in an induction kitchen all day than gas. It’s easier to clean, and we don’t have to deal with gas burning all day. Going with induction was a win-win situation,” he added.

With his new induction kitchen, Martin can switch his salamander grill on whenever he needs it, with the fast action unit reaching full heat within just four seconds, as opposed to using a gas grill which would usually have to be left on for the duration of full shifts.

As someone who “hates cleaning”, Martin also benefits from only needing to carry out a simple wipe down of the units after shifts, a stark contrast to the dirty, burned-on, carbonised black environment caused by gas.

Having saved on time, money and energy by turning to induction, Martin summed up his new pièce de résistance as a nod towards the future of commercial cooking.

“Having worked with gas for many years before opening The Arbury, I’ve noticed a massive difference between the two. It’s quite revolutionary actually, and I feel quite emotional talking about it. I can’t thank the team at Target enough for helping me turn my vision into something beautiful.”

David Pedrette, Managing Director at Target Catering Equipment, said: “To hear such fantastic feedback from Martin is wonderful for what we’re trying to do. Induction has so many benefits, especially for smaller operators such as The Arbury where a quick turn around and fast heat are essential. We’re delighted that Martin is so pleased and we wish him all the best with his efforts at The Arbury!”

For more information on The Arbury, visit www.thearburybaldock.co.uk.

For more articles on the culinary sector, please visit our dedicated section here.