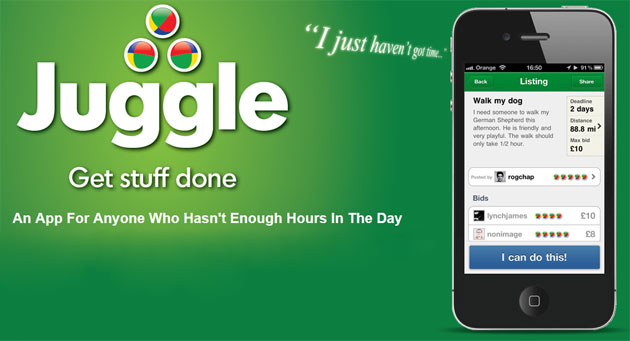 No time to get everything done? There’s An App For That. Juggle is like Bob-A-Job on your iPhone…

A new service has just been launched on the iPhone with the aim of making life easier for busy London professionals. Juggle is a new iPhone app bringing a Bob-A-Job style-experience into the grown up mobile age.

The service connects cash-rich, time poor individuals (who have tasks, errands and odd-jobs that need to be completed – anything from personal errands such dog walking, gardening, DIY tasks, standing in line for tickets, window-cleaning, house-sitting or Ikea runs to professional services such as translation or musical instrument lessons) with an army of individuals – called Jugglers – who can complete them.

The app works by allowing people to post any task they want completed and set a maximum price, deadline and location. Once a job is live, Jugglers can bid on it in a Dutch-style auction with people using a combination of price and reputation to choose the successful applicant.

The service launches initially as an iPhone and iPod Touch application. Android, iPad and an online version will follow shortly.

The service was founded by two London professionals – Stas Murzynowski and David Marrinan-Hayes – to solve some problems they had observed themselves.

David says ‘most people I know are too busy to do everything that needs to be done. I even lost my own moped because I was too busy to pick it up from the garage, so we wanted to create a service that would allow people to outsource some of the things they just don’t have time to do’.

Says Stas ‘ with record unemployment and rising educational fees, we thought this was a good way to help people make some extra cash helping others. We think of it like a digital Bob-A-Job or eBay for services where hopefully you’ll be able to get anything you ever need done completed at the right price by the right person. We’re even using it to recruit our own staff and look for funding’.

Juggle is available in the iTunes store now*.