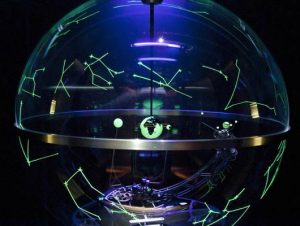 The first is that of history, which uses select pieces from the Panerai Museum to trace the development and establishment of the Panerai brand, from its roots as a Florentine workshop to preferred supplier of precision instruments to the Italian Navy.

The second stage covers the brand’s international fame following its acquisition by the Richemont group in 1997: a large room displays the most symbolic timepieces of the 14 years in which Officine Panerai renewed the former glory of its iconic watches, the Luminors and Radiomirs, quickly developing a complete range of movements designed and produced in-house in its Neuchâtel factory. This section also features a selection of watches from the latest Officine Panerai collection, including models with the new hand-wound mechanical P.3000 calibre and the Luminor Submersible 1950 3 Days Automatic Bronzo – 47 mm.