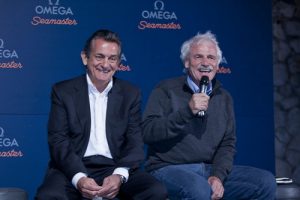 At an event on the Italian island of Capri held on the 19th of May, Omega and Yann Arthus-Bertrand will collaborate to create a film about the Earth’s oceans, reminding viewers of these natural beauties that cover two-thirds of the planet’s surface and to raise awareness of what we can all do to protect them.

When asked why Omega and Yann Arthus-Bertrand the renowned environmentalist and filmmaker chose to work together on this project, Omega Watches President Stephen Urquhart said, “No one could do it better. Yann Arthus-Bertrand is both an environmentalist and the world’s leading specialist in aerial photography. He has a unique combination of skills that will allow him to communicate the majesty and the beauty of the oceans cinematically.”

Yann Arthus-Bertrand said of his partnership with Omega watches, “We will work together to create a film which meaningfully reflects the beauty of the oceans and reminds everyone to save these amazing sources of life.”

At the same event, Omega watches announced that it has entered into a partnership with GoodPlanet, an organization founded by Yann Arthus-Bertrand. GoodPlanet has established a global reputation for its unflinching dedication to the promotion of sustainable development.

Omega watches and GoodPlanet are establishing an initiative that will help to raise awareness of the need to protect the oceans by showing their beauty and explaining the challenges humankind and the oceans are facing together. They plan to collaborate on the production of books and materials that will focus not only on the majestic splendour of the oceans but will also educate people about what might be done to preserve them.

Omega Watches – a legacy of oceanic exploration and advocacy

Omega Watches has long been associated with the planet’s oceans. In 1932, it released the Marine – the world’s first divers’ watch. In the nearly eighty years since, Omega Watches has been associated with some of the best-known underwater explorers and oceanographers including Jacques-Yves Cousteau, Charles William Beebe, “Dolphin Man” Jacques Mayol and the late Sir Peter Blake.

What are Promise Rings and Why Have they Become so Popular?