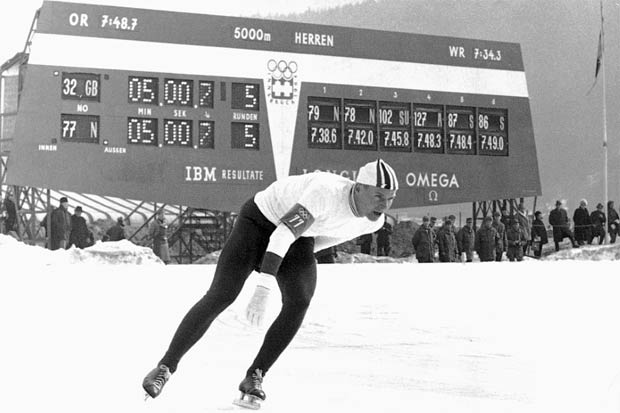 When the Opening Ceremony of the first Winter Youth Olympic Games kicks off in Innsbruck on January 13th 2012, it will mark the beginning of a new era in international sporting competition among the world’s young athletes.

Talented 15- to-18-year olds from almost 70 nations will be demonstrating skills which might just take them to the highest-profile sporting stage on earth within a few short years.

Although the Winter Youth Olympic Games are being held for the first time, the young competitors will have more than their sporting talent in common with their Olympian counterparts: as with the Olympic Games, each of the 63 events in all 15 disciplines will be timed by OMEGA. Since 1932, OMEGA has been Official Timekeeper 24 times; the brand is particularly proud to be bringing its unparalleled sports timekeeping legacy to Innsbruck for the first edition of the Winter Youth Olympic Games.

OMEGA’s timekeeping and data handling professionals will arrive in Innsbruck equipped with tons of equipment – a veritable arsenal of the world’s latest and best sports timing and judging technology.

Here’s a preview of the equipment which will be used at the Winter Youth Olympic Games.

Electronic Start System
The most logical place to begin is with OMEGA’s new Electronic Start System. One of the most enduring images from any Olympic Games is the starting pistol, reminiscent of the revolvers so popular in movies set in the Old West. At the Winter Youth Olympic Games, a streamlined, futuristic device composed of a flash gun and a sound generation box will be used. When the starter presses its trigger, three things happen simultaneously: a sound is “played”, a light flash is emitted and a start pulse is given to the timing device. By pressing the trigger a second time within two seconds, the false start will be audibly signalled. The sounds can be changed and downloaded by computer.  As was the case with traditional powder pistols, the sound will be reproduced by speakers near each competitor, guaranteeing that they will hear the signal at the same time. At some venues, the audio signals will also be put on the public address system.

The Snowgate starting gate
Alpine skiers at the Winter Youth Olympic Games will start their runs through a starting gate called “Snowgate”. This technology ensures that the starting pulse is generated when the “wand” (or “bar”) is at precisely the same angle for every competitor. The control box for the device includes both a main and a backup system. The systems use different technologies – one is purely mechanical; the other is electro-mechanical. The skiers have a ten-second starting window and can begin up to five seconds before or five seconds after the official start time. If they are within this time frame, the timing system will be activated automatically when they burst through the gate; otherwise, they are disqualified.

High-definition judges’ scoring system
In figure skating, OMEGA Timing’s high definition judges’ scoring system will be in place. It has been in use since the beginning of 2009 for ISU Championships and made its first Olympic Games appearance in Vancouver in 2010. The system provides several additional advantages: there will be a tremendous increase in quality thanks to the high-definition images. It also weighs considerably less than its predecessor and offers improved handling. Furthermore, OMEGA’s timekeepers can provide all the necessary support in the operation of the system and will no longer have to rely on third parties.