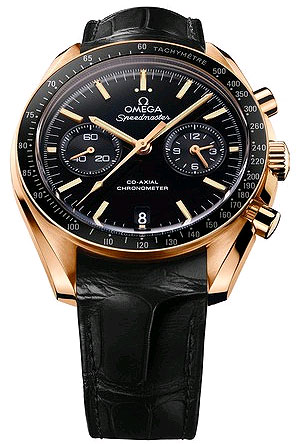 Since it was launched more than half a century ago, the Omega Speedmaster has defined the classic chronograph. It is rugged and reliable and has a timeless design. And since the day in July 1969 that it was first worn on the lunar surface, it has been known by its nickname, the Moonwatch.

This Christmas, an innovative new member of the family is being introduced, equipped with the Omega Co-Axial calibre 9301 – the Omega Speedmaster Chronograph Co-Axial calibre 9301. While it shares some core elements with the original Speedmaster Professional – the black dial, the Moonwatch-style hands and the familiar tachymeter on the bezel – it also has some distinguishing features that will attract an even wider audience to the world’s favourite chronograph.

The Omega Speedmaster Chronograph Co-Axial calibre 9301 featured here has a 44.25 mm case in 18k orange gold and a dramatic black ceramic bezel with a contrasting metallic grey tachymetric scale. With this watch, Omega has introduced its striking new 18k orange gold whose elemental composition contributes to its unique colour and its high level of hardness.Like all of the gold used in Omega’s products, orange gold is 18k, meaning that the metal is composed of 75% gold. It has a high copper content (23.98%) which contributes to its vivid colour.

The remaining 1.02% is divided evenly between platinum and silver. The platinum enhances both the hardness of the material and the value of the precious metal. The fact that platinum doesn’t oxidise acts to stabilize the red colour. The Omega Speedmaster Chronograph Co-Axial calibre 9301 has a black enamel dial with 18k orange gold transferred elements and hands. It is offered on a black leather strap.

About the OMEGA Co-Axial calibre 9301
It is equipped with the OMEGA Co-Axial calibre 9301 and thanks to its Co-Axial escapement and free sprung-balance, the chronograph will deliver outstanding reliability over a long period of time. The innovative column-wheel chronograph has 12-hour and 60-minute counter hands placed on the same subdial at 3 o’clock. This familiar arrangement of the hands, which recalls the hour and minute hands on the main dial, enables intuitive reading of the chronograph. It also has a central chronograph seconds hand and a small seconds hand on the sub-dial at 9 o’clock. The two chronograph control pushers function totally independently – accordingly, there is no risk to the chronograph mechanism as a result of inadvertent manipulation.Like OMEGA’s other in-house Co-Axial movements, the calibre 9300/9301 features a decorative pattern known as “Côtes de Genève in Arabesque”.

The Omega Speedmaster Chronograph Co-Axial calibre 9301 is a welcome addition to the great Speedmaster family. With its 18k orange gold case, its innovative movement and its legendary family name, it will find an enthusiastic following among Speedmaster fans who want to combine the impressive legacy of an iconic chronograph with the best series-produced mechanical watch movement in the world.