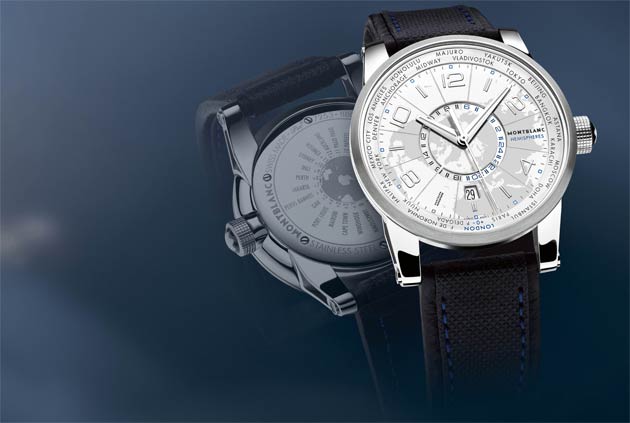 Unveiled earlier this year at the SIHH salon in Switzerland, Montblanc’s two TimeWalker Hemispheres timepieces (Northern and Southern) simultaneously illustrate the different times in all of the world’s 24 regions.

The local time in the zone in which the wearer is situated is shown by the hands, while the flange around the dial displays the names of 24 cities from the relevant side of the equator. A 24-hour disc indicating the hours at the locations positioned opposite the disc’s markings on the flange turns at the centre of the dial. The individual is then able to see which hour is showing on the clock across all of the world’s time divisions.

As an additional feature, Montblanc has enhanced these watches with another dimension. While the time zones progress with the sun from east to west across the meridians of longitude, the timepiece equally brings the north-south axis into play across the northern and southern version. The Northern Hemisphere model shows a map of the globe as seen from the north with the North Pole at its centre. Cities marked on the ring span from Anchorage to Vladivostok. The Southern Hemisphere variant on the other hand puts the South Pole in the midpoint and bears only the names of places lying south of the Equator which include Rio de Janeiro and Sydney.

These different perspectives naturally affect the time displays and require corresponding adaptations in the mechanical movements. Both models have immobile rings around their dials marked with the 24 place names in the relevant hemisphere, but the 24-hour discs in the centres rotate in opposite directions: the disc turns clockwise on the Northern Hemisphere watch and bears a 24-hour scale labelled anticlockwise as opposed to the 24-hour disc on the Southern Hemisphere timepiece which turns anticlockwise and illustrates a 24-hour scale in a clockwise direction. 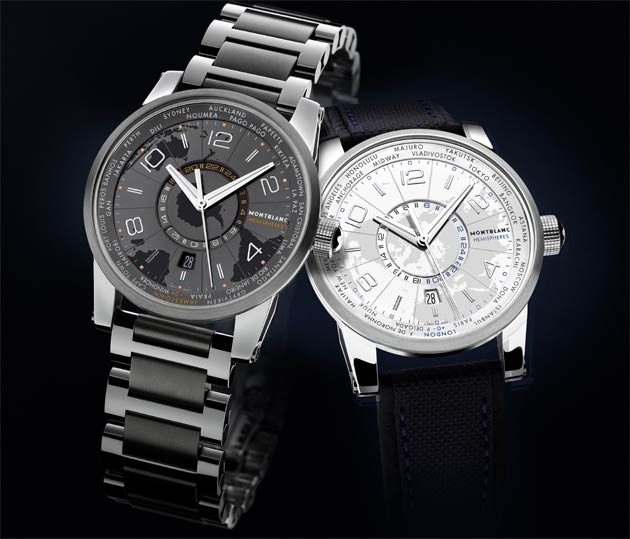 The two TimeWalker World-Time Hemispheres models differ not only because of their distinct dials, but also because they’re equipped with separate movements, which are necessary to rotate the 24-hour discs of the two timepieces in the proper directions. To assure that the wearer can keep an eye on the entire planet, from east to west and from north to south, the Northern Hemisphere watch bears the southern place names on its case back and vice versa.

This spectacle is housed within a stainless steel TimeWalker case which measures 42 mm in diameter and has a very narrow bezel, thus leaving ample room for large and readily legible indicators: a time-zone ring with the 24 place names, an hour circle with the TimeWalker’s typical relief numerals and indices, a 24-hour disc in the centre (where it turns clockwise in the one model and anticlockwise in the other) and a window for the date at the “6”. In order to avoid potential confusion, the northern and southern variant each has its own colour scheme. The Northern Hemisphere sports a silvery grey dial and is affixed to a sporty black leather strap. The wristwatch for the Southern Hemisphere has a dark anthracite-coloured dial and a stainless steel bracelet with a folding clasp.

The Montblanc’s TimeWalker Hemispheres timepieces are available to purchase from September 2013.