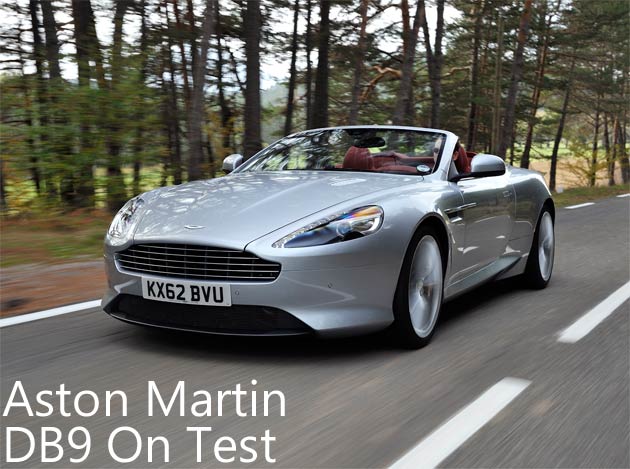 Luxurious Magazine Editor, Simon Wittenberg, gets behind the wheel of the stunning Aston Martin convertible.

The Aston Martin DB9 sports GT first went into production in 2004, a car penned by Ian Callum (now at Jaguar) and Henrik Fisker, who went on to establish his own supercar brand. Available as a coupé or volante (drop-top), the DB9 replaced the outgoing Virage and was the first model to be manufactured at the marque’s Gaydon facility following the move from Newport Pagnell. It was also the first to use Ford’s aluminium VH (vertical/horizontal) platform which was later adopted for the DBS.

Styling cues from the DB9’s predecessor can clearly be seen within the sweeping lines and beautiful shape of this car. The DB9 Volante is a head turner and sits relatively low down (our test car came with the £2,595 cost option of 20-inch 10-spoke silver wheels with a diamond turned finish), visually ‘planting’ it on the road. This model’s inherent width is highlighted by the ‘light catcher’ feature which runs from the lower front bumper and continues along the sill of the car, thereby creating an aggressive stance.

At the tip of the large sweeping bonnet (punctuated by the optional Magnum Silver bonnet and side strake meshes) is the iconic front Aston Martin signature grille which feeds air into the uber impressive low weight carbon ceramic braking system (fitted as standard). Bi-xenon headlamps complete the look up front, whilst the beautifully-crafted rear is characterised by a subtle tail spoiler, twin sports exhausts and clear LED lights. At 187 litres, the boot which houses its very own full-sized Aston Martin-branded umbrella, is sizeable for this type of car, enough to fit in some luggage for a weekend away or a small weekly shop.

On the inside, the leather-clad cabin is laid out in a 2+2 format, meaning that there is room to carry two additional passengers in the rear, although head and legroom are both limited for fully grown adults. The voluptuous and hand-stitched driver and passenger sports seats are extremely comfortable and come complete with added lumbar support as well as a memory function which allows owners to have the very same position and mirror adjustment every time that they get in the car. The graphite centre console has been beautifully designed and there is even a Lamy pen which springs out of this front fascia at the touch of a finger, such is the attention to detail. To the left of the leather sports steering wheel is the LCD screen which folds out of the centre stack. This small monitor displays the Garmin-powered satellite navigation which is clear and very intuitive to use, but also doubles up as the reversing camera interface (an additional £995 over the standard equipment) which accurately guides you into a space through a series of coloured line markers. 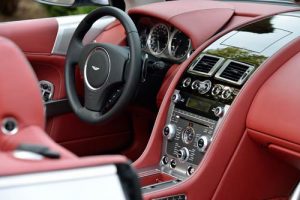 Entertainment comes courtesy of the multi-speaker Bang & Olufsen audio system which cleverly detects how many people are in the car via the number of seatbelts in use. Sound can be optimised for front and rear passengers, and at the heart of the system is Acoustic Lens Technology which gives listeners an improved sense of space, staging and realism. The pinnacle of the Bang & Olufsen setup is undoubtedly the two motorised UFO-shaped acoustic lenses mounted at the base of the windscreen which rise out of the dashboard when the sound system is on.

The crystal capped cartridge-type key fires up the sublime latest generation 510 bhp 6.0-litre AM11 V12 engine which catapults the car to 62 mph (100 km/h) from a standing start in just 4.6 seconds, all complemented by a beautiful purr. The top speed is quoted at 183 mph (295 km/h) which is nearly as quick as the Ferrari California. The powerplant is mated to a nicely configured six-speed ZF automatic transmission featuring gear shift technology. This means that you can use the dashboard mounted buttons to manoeuvre, or for drivers looking to determine their own ratios, pressing the ‘D’ button whilst driving grants the freedom to move up and down the gears using the paddles. For those who want some added bite with the throttle, there is the ‘Sport’ mode which results in the up and downshifts occurring at higher engine speeds.

So what is it like to drive? It’s surprisingly simple and non-intimidating with excellent handling and grip to match. Put your foot down gently and the car is catapulted up the rev range in the blink of an eye. However, being behind the wheel of the DB9 is a pure joy and a sensation which is utterly impossible to get bored of. All-round visibility is excellent, and when the weather conditions are favourable, the DB9 Volante is best enjoyed with the top down – this is when you can truly hear the exhaust notes in all their glory. The fabric roof takes around 17 seconds to open and close so the interruption to the overall driving experience is insignificant.

According to motoring sources, the replacement for the DB9 model is due to arrive in 2016, and I’m sure its worthy successor will pick up where this truly amazing car has left off.

DB9 Volante Specification at a glance:

See the Aston Martin DB9 Volante Gallery by clicking an image below: