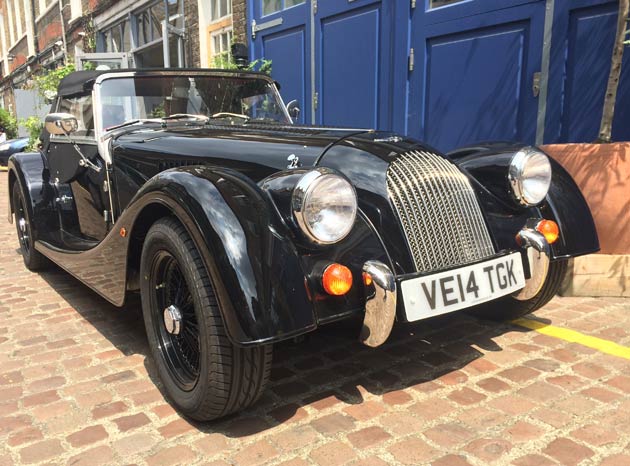 Luxurious Magazine Editor, Simon Wittenberg, spends a sun-kissed weekend in the company of a Morgan Plus 4.

“What’s that?”, said the Toyota driver who was lined up next to me in stationery traffic. “It’s a Morgan”, I shouted out. “It’s beautiful”, he replied. And he’s right. When people take the time to wind down their window for a closer look, it re-affirms that you’re behind the wheel of something that’s truly special. The Plus 4 (or +4) doesn’t fail to turn heads, whether it’s road users or pedestrians. 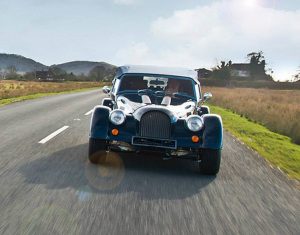 The model was first introduced by the Worcestershire-based British automaker in 1950 at the Earls Court Motor Show and was made until 1969, before being revived again between 1985 and 2000 (acting as a stop gap between the 4/4 and the Plus 8). Production then ceased for the next five years, but has continued ever since. Today, Morgan manufactures around 1,300 cars every year for customers worldwide and the Plus 4 and 3 wheeler are amongst the most sought after variants, especially in the UK and Germany.

The iconic shape of the Plus 4 has changed little since the car was first launched over 60 years ago. The beautiful wave-like wheel arches, round headlamps, the curved silver grill, as well as the long sweeping bonnet are just some of the features that have stood the test of time. Every Morgan can be customised according to the buyer’s desires. And there are a plethora of options to choose from on top of the standard equipment. These include a spare wheel, overriders, 80 different colours of leather for the interior, as well as the type of hood (easy up or old style) and 15-inch wire wheels. Our test car came in regular black paint and sported the options of red leather and a beautifully-crafted Mota Lita wood steering wheel.

The latest 2014 Plus 4, which tips the scales at just under a tonne, uses a two-litre Ford GDI engine pushing out 154 bhp at 6,000 rpm and is married to a five speed Mazda gearbox. This results in a leisurely 0 to 60 mph sprint in 7.5 seconds accompanied by a deep but nicely tuned vintage-sounding growl from the single exhaust. It’s not blisteringly fast (the top speed is only 118 mph), but it’s more than adequate to enjoy this fabulous piece of home-grown engineering. 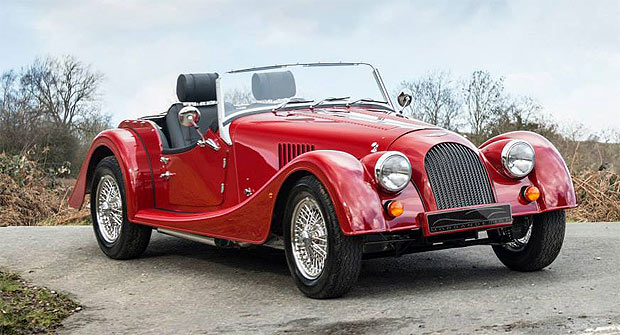 Driving a Plus 4 is like returning to the past – it’s a pure motoring experience but with a modern twist. There is no ABS or power steering which means that you have to put in some additional physical strength compared to the modern road car in order to get the most out of it. You do however in return get a modern dash layout, a power socket and stereo which are tucked away neatly out of sight. The driving position is relatively low down in the hugely comfortable leather-clad seats which are labelled with the Morgan moniker. Behind is a small area to store a few bits and bobs and the Morgan-branded bags which protect the upper door panels when removed. All-round visibility is good for this type of car, but the small passenger wing mirror should not be relied upon as it doesn’t reveal much when driving, no matter how it is angled. Good old fashioned head turning is best used to make sure that it is clear to manoeuvre. 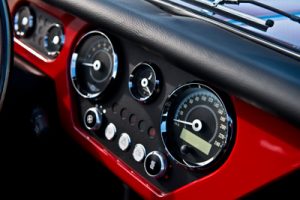 It’s easy to put up with the quirks, but you can’t help but get nostalgic when driving such a great British institution. It seems as if you have been transported back in time and that you should be dressed in tweed and smoking a pipe to really fit in with your surroundings. The Plus 4 is more at home in the countryside than in the city, and regardless of the surface, you feel every crevasse in the road due to the stiff ride. This however makes you a better driver as you have to constantly be on your toes to point the nose towards flatter ground and be able to react to the car being jolted around.

The car is undoubtedly best enjoyed with the roof down. There is no air conditioning and the vents blow out warm air which leaves only the small gap in the plastic windows that slide back to catch a light breeze. The top half of the door panels and windows are also removable for those wanting a more ‘exposed’ drive. There are no cleverly-programmed mechanics either to lower or raise the roof at the touch of button as with many of today’s soft tops. Like the building of the car, everything is done by hand. When exposing the cabin to the elements, there is a strict process to follow which involves unclipping, folding and unbuttoning. It’s relatively quick once you get the hang of it, but putting the time in rewards you with a sense of bonding and a greater emotional connection with the car.

The Morgan Plus 4 is beautiful to look at and wonderful to drive, and it’s the perfect combination of a classic with the bonus of some of today’s technology and engineering. I know what I’m getting next…

Morgan Plus 4 specifications at a glance: