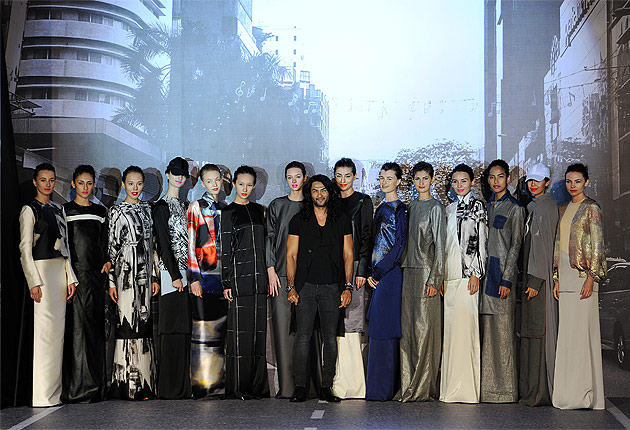 The thing women have yet to learn is nobody gives you power. You just take it.
~Roseanne Barr~

Bernard Chandran showed his Hari Raya Collection to an enthusiastic audience recently with the catwalk and backdrop of his show designed to resemble the streets of Bukit Bintang, the premier shopping and entertainment district in the heart of Kuala Lumpur.

With a feminine silhouette but updated for the modern, contemporary woman, Chandran said the whole idea behind the collection was that it pushed boundaries and that it brought traditional Malay wear, the Baju Kurung to the streets. “It’s no longer a traditional costume worn only for festivities or celebrations, “ Chandran said with his trademark candor. “It can be worn daily in a chic way.”

Perhaps nothing says it more than a collection that brings focus to women empowerment and highly salutes ladies of our community, who lead, nurture and raise our next generation. The Bernard Chandran women are confident, fashion-forward, successful yet humble and extremely desirable.

Modernising the traditional Kurung and Kebaya were among Chandran’s early interests – a fascination to constantly push the boundaries and not rest on the comfort laurels has led to evolutionary contemporary results year-on-year.

Aesthetically gasping with an international flavour, this is the outcome of raising the bar in traditional designs and combining with cutting edge urban aesthetics. Tailoring with a carefully engineered cut and craft – precisely what Chandran is known for.

Leather and linen are choice fabrics. Block and pop colours dominated the palette of the collection, with shimmering and glittering fabrics lighting up his evening wear. And this being Bernard Chandran, everything was luxurious. “A civilization without luxury is a lost civilization,” Chandran quipped backstage. We couldn’t agree more.