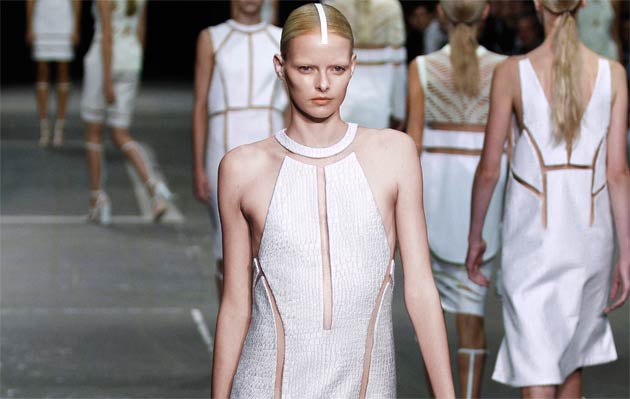 Who would have thought that a Parsons School of Design drop out would win the coveted and highly respected CFDA/Vogue Fashion Fund in 2008, an honour accompanied by a $20,000 award to expand one’s business?

Launching his first women’s ready-to-wear collection in 2007, Alexander Wang’s look incorporated the casually cool downtown style, drawing inspiration from the nineties, French chic, and rock grunge—always finished off with a slouchy, rolled-out-of-bed edge. This collection was an instant hit, selling internationally to over 200 boutiques and retail stores, Later, Wang launched a diffusion line of pre-weathered cotton tees, tanks, and T-shirt dresses in spring 2009, T by Alexander Wang, as well as a footwear collection of towering platform sandals to much critical success. Today, his clothes and accessories are sold globally by more than 30 of the world’s premiere retailers including Barneys New York, Neiman Marcus, Bergdorf Goodman, Dover Street Market, Browns, Otte, Joyce in Hong Kong and Selfridges.

Alexander Wang was born and raised in San Francisco in 1984 to Taiwanese American parents. At age 18, he moved to New York City where he enrolled at the prestigious Parsons School of Design. After winning the Council of Fashion Designers of America and Vogue Fashion Fund Award, he was featured in the November 2010 issue of Vogue in remembrance of winning the award in 2008, in an article entitled “The Aluminati”. In 2009, he was recognized by his peers when he was announced as the winner of the Swarovski Womenswear Designer of the Year and in October 2009, he was the recipient of the Swiss Textiles Award. Alex was celebrated again in 2010 with another Swarovski Designer of the Year Award, this time in the Accessory category.

Wang grew his line of slouchy tees and tough-girl leather into an award-winning full-blown lifestyle brand including shoes, accessories and objects like a $150 yoga mat with a lamb leather strap. He was recently picked by French luxury conglomerate PPR to become the creative director of storied fashion brand Balenciaga. Wang is the first designer of Asian origin to head a Paris fashion house. He continues to run his own New York label. Among his celebrity clients are Megan Fox, Mary-Kate Olsen, Nicole Richie, Gwyneth Paltrow.

For his Spring 2013 collection, Alexander Wang depicts a linear quality that is clean and minimal with floating lines created by translucent fish wire, embroidery and exaggerated eyelets. The juxtaposition of tension and suspension are captured between structure and fluidity while dissected pieces build on a new silhouette, which embodies lightness and delicacy. Sportswear is influential in a nuanced way through suspended patches fused with lucent fish wire on shirts and dresses, styled with lacquered baseball helmets.

Exoticism and animalistic elements which are dominant features realized through python, karung and embroidered techniques, such as croc, zebra and giraffe patterning, are interpreted through a blown up eyelet technique. Transforming simple pieces through fabric treatments and manipulation, these graphic qualities exploit skeletal systems and body mapping. Handbags further reflect the play on suspension and versatility where a beach bag is combined with an evening clutch.

Footwear continues to build a new shape revealing an inverted skeletal outline of a boot; in addition, when shorts are paired with the floating panels, an illusion of a pant emerges.