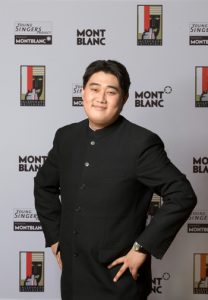 The extraordinary voice of modern opera has already a long-standing relationship with the brand and feels attached to Montblancs commitment of supporting young artists. In his profession as a tenor and through his individual style, the Chinese bass baritone mirrors the cornerstoness of the Montblanc brand: passion and achievement – tradition and timelessness. With only 27 years, he is already to be counted among the classical music world-class stars, embodying tradition and innovation at the same time.

“We are delighted to have Shenyang on board as one of our brand ambassadors. Since we met him three years ago, we have seen his career grow at an incredible speed. We recognize Shenyang’s outstanding talent and his ability to bring music to new audiences around the world, which fits perfectly with Montblancs commitment to the support of arts & culture across the world.” explains Montblanc CEO International Lutz Bethge.

About Opera Star Shenyang and Montblanc

Born in Tianjin, China, the 27 year old Shenyang has already compiled a number of prestigious awards: He received international recognition when he won the prestigious Cardiff Singer of the World in 2007. This was followed by the Borletti-Buitoni Trust Award in 2008.

Moreover, Shenyang has a long-standing relationship with Montblancc as he participated in the “Montblanc Young Singers Project” in Salzburg in 2008 and was awarded with the “Montblanc New Voices Award” in St Petersburg in 2010. He is also considered to embody a 21st century bridge between the cultures of East and West, breathing life into many of classical music’s greatest works as well as into to the vocal treasures of his native heritage.

Highlights of his present and recent seasons also include performances of Handel’s Messiah under the baton of Helmuth Rilling at the New York Philharmonic and Dallas Symphony Orchestra, the title role of Mendelssohn’s Elias in his Boston Symphony Orchestra debut with Rafael Frühbeck de Burgos (in Boston and at Carnegie Hall), an international tour performing songs from Mahler’s Des knaben Wunderhorn with Edo de Waart and the Hong Kong Philharmonic, and an arias concert conducted by Valery Gergiev at the White Nights Festival.