Younger guests are now made to feel even more welcome at Orient-Express’ Sicilian properties Villa Sant’Andrea and Grand Hotel Timeo in Taormina as the hotels launch their first ever children’s club. 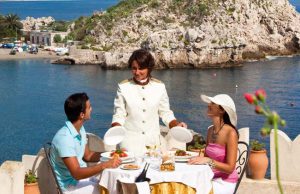 In time for the summer holidays, a jam packed summer programme and host of cultural activities awaits little ones to keep them entertained at the beautiful seaside town.

Welcoming ‘Andy the Hermit Crab’ and ‘Timmy the Donkey’ to be its mascots for the summer, the children’s club is based at Villa Sant’Andrea, on the stunning coastline of TaorminaBay. Along with the shuttle service that runs between the hotels, the children’s club is a complimentary service, and is available to children aged 4-12. The club is in operation from mid June to mid September and is open daily from 10am to 5pm, allowing parents to have some downtime to themselves. Overseen by an English speaking supervisor, the club can organise for younger guests to learn about the eclectic Sicilian culture and holds fun activities such as Granita making classes, the traditional lemon and crushed iced drink favoured by habitants of the island to cool down in the scorching sun. Pizza making classes held by Villa Sant’Andrea’s head chef will also be organised, where little ones will be taught how to knead dough and have the chance to garnish their pizzas with the toppings of their choice.

Amongst the excursions on offer at the kid’s club, are horse-back adventures through the Sicilian countryside and treks through the stunning Alcantara Gorges, which have been formed through the countless eruptions from Mount Etna. For families who want to plan a day trip together visits to the Casa delle Farfalle, the largest butterfly house of its kind in Italy, can be arranged to learn about the different species that inhabit three tropical environments and the other exotic animals that live with them – iguanas, turtles, and parrots. 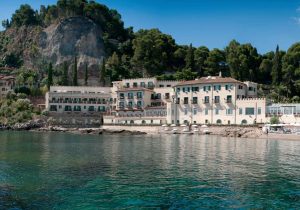 To celebrate the new club, both hotels are offering the ‘Very Important Kids’ package, with three nights accommodation in a double deluxe room for parents and a double room for children up to 14 years of age. Four hours of babysitting service is also included in the package, allowing parents to perhaps have a romantic dinner on their own or grab some much needed ‘alone time’. Prices start from approximately £2,241 per family. For reservations please call Orient-Express UK reservations on 0845 077 2222.

The introduction of the children’s club follows a series of refurbishments at both Orient-Express properties in Taormina. At Villa Sant’Andrea, the fine dining restaurant Oliviero was extended onto the terrace so that guests can now enjoy the fresh seafood specialities of the menu in the open air. The bar at Grand Hotel Timeo has been extended and opens out onto the legendary Literary Terrace which boasts uninterrupted views of Mount Etna. With a new sheltered canopy, the bar allows guests to take in the spectacular scenery whilst they sip a sun downer at sunset or enjoy an aperitif after dinner.