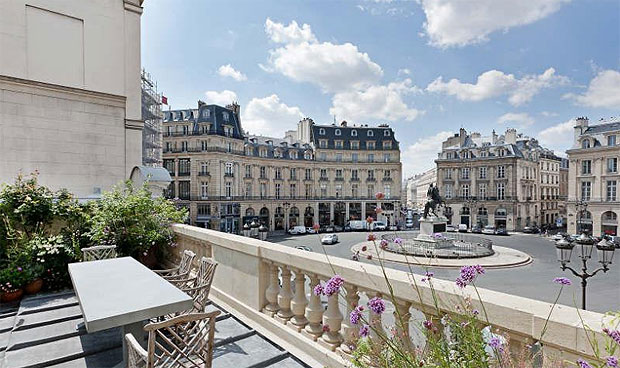 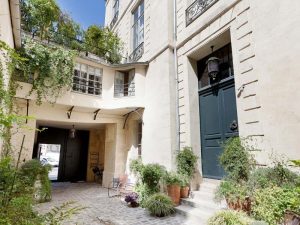 Located at the very epicentre of Paris on the right bank of the River Seine, this exceptional 17th-century private mansion has been renovated by renowned architect Laurent Bourgeois, with a flexible layout allowing it to be split into three principal apartments. Set on one of the most prestigious and old parts of Paris dating as far back as the Roman times, just off Place des Victoires on Rue Vide Gousset this property is a spectacular palatial residence.

The entrance to the house is through a private courtyard offering perfect seclusion. The first floor, which houses the sitting room, library, kitchen, and office, spans 86 square meters and can also be used as a an apartment on its own with a private entrance opening to a landscaped courtyard. The house further features a triplex apartment of 380 square meters on the second and third floors with a terrace spanning 40 square meters overlooking Place des Victoires. A master bedroom, with the sitting room and a further kitchen and living room, can be found on these levels. Another 180 square meters duplex apartment is located further up on third and fourth floors leading to a 40-square-meter terrace. Both apartments are connected through a main staircase and a lift.

In central Paris the opportunity to purchase such a prominent property restored to perfection is one not to be missed, it is one of the best properties to become available and exceptionally rare to the market,” says Giles Hannah, Director at Christie`s International Real Estate.

Some of France’s finest craftsmen have been involved in the renovation of the property which took almost 10 years to complete, bringing an elegant but also slightly bohemian feel to the property. Artworks include 18th-century paintings as well as 20th-century sculptures. The purple Donald Judd stack opposite the 17th-century Belgian tapestry on the entrance of the property is a great demonstration of the harmony between old and contemporary elements adorning the house. The property’s lofty interiors were preserved with incredible attention to detail, stonework on the dormer windows were copied from the originals and layers of paint and plaster were removed to reveal the original stonework.

Marie-Hélène Lundgreen Director at Belles Demeures de France, luxury arm of Daniel Féau Conseil Immobilier says, “This 17th-century Hotel Particulier is a dream property, unique and the only property individually owned on the famous Place des Victoires, in the heart of Paris’ recently most trendy area.” 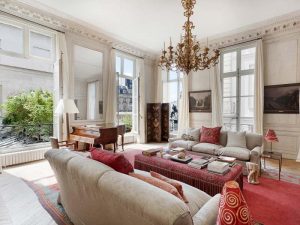 Set between the first and second arrondissements, the property was previously inhabited by poet Jean de La Fontaine and Marguerite de la Sablière, whose salon was attended by Molière and Racine. Nowadays the area maintains all the elements of old Paris but also has a fashionable, bohemian charm, with gourmet restaurants, such as Chez George, making it a very sought-after neighborhood of the capital to live in. The area’s village atmosphere, its street plan based on the medieval footprint and locals from the creative world bring out Paris at its best. More recently the property in Place Des Victoires, was featured in the opening scenes of the movie “The Tourist”, starring Angelina Jolie and Johnny Depp.

On this quartier the Louvre, the Paris Bourse, Banque de France headquarters and the Opera–Garnier are found. The second arrondissement is also home to most of Paris’s surviving 19th-century glazed shopping arcades and the Palais Royal is only a short stroll away including the wonderful shopping around Rue Saint-Honore.