Moscow’s luxury property market recorded the weakest performance, with prices declining by 8.0% in the year to Q1 2011; however, the rate of decline is in luxury property prices in Moscow is slowing, with only a 0.7% drop recorded in the last quarter

A year ago there was a clear continental divide when it came to the growth in the world’s luxury property prices. Asian cities occupied the top rankings for price inflation while Europe and the US trailed far behind. A year on and the global picture is less clear cut.

Liam Bailey, Head of Residential Research at Knight Frank, comments: “I am pleased to announce the launch of Knight Frank’s Prime Global Cities Index. The Index will provide investors and owner-occupiers with a quarterly analysis of the performance of the prime property markets in key world cities. There is now an increasing divergence between the performance of the prime global cities and their wider domestic markets. Governed less by affordability and macro-economics and more by international demand as well as fluctuations in supply and changing tax rules, these cities compete at a different level in attracting the world’s wealthy elite. The top end of the London and Paris markets, for example, are now sectors which appeal to wealthy international purchasers as much as to the domestic rich, meaning their price performance is capped by global economic and wealth trends as much as by national factors.” 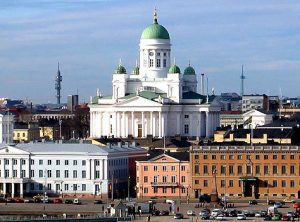 “Our first set of results provides some interesting findings. In Q1 2010 there was a simple sub-text to the global prime property market: Asian cities were witnessing double-digit price growth on an annual, and in some cases quarterly basis, while Europe and the US were occupying the bottom rankings. A year on and the scenario is less clear-cut. The rate of growth in Asia is more subdued but elsewhere supply and demand imbalances are fuelling prime property prices in cities such as Paris, London and Helsinki. In Asia, government cooling measures have started to impact on the prime housing markets in Hong Kong, Shanghai, Beijing and Singapore. In Q1 2010 average annual price growth across these four cities stood at 54.6%, whereas in Q1 2011 this figure fell to 11.1%. In Q1 2011 the cities in our index recorded average annual price growth of 6.6% compared to 12.7% a year earlier – this is largely attributable to the slower pace of growth in the Asian cities. The weakest overall performance was recorded in Q2-2009 when the 15 cities included in our index saw the price of prime property decline by 9.7% on average, on an annual basis.”

“Analysis of the latest quarterly price change arguably provides a better indication of the immediate direction of the local markets. St Petersburg recorded 8.1% growth in Q1 2011, Hong Kong 6.4% and prime central London 3.5%. There are also a number of cities experiencing negative quarterly price movements – Zurich, Singapore, Moscow and, most significantly, New York. The recent rise in Paris repeats the post-crash super-bounce in the central London market. These are the city markets where tight supply constraints meet high, and growing demand from an expanding international HNWI and UHNWI population.  Global buyers in the London prime market make up 50%+ of the market; in New York (Manhattan) it is circa 15%, in Singapore 30%, and Hong Kong around 20%.”

“In Paris’s case, its strong performance can be attributed to burgeoning demand set against a backdrop of tight supply. Investors from the BRIC nations are increasingly looking to Paris as a safe haven to invest funds in a mature and high-performing market. Like London, supply is hindered by a paucity of new-build developments as the proportion of units allocated to social housing often makes luxury new developments unviable: the simple fact is that, with a few infill exceptions, the opportunity to build ‘another Eaton Square’ is almost non existent. In Asia the story is less clear cut  as there are lots of luxury addresses in Hong Kong or Singapore, but these are less established markets and there is still the scope for new prime localities to emerge. Our view is that the next property cycle – which has already started – will see the consolidation of an elite tier of global city markets, where the top addresses will become increasingly fought over by wealthy buyers as stores of value and long-term secure investments. Values will rise from here. It won’t be a steady upward path, and there are some considerable risks out there – from sovereign debt in the West to asset bubbles and hot money in the East. But in the last two years the highest price achieved in the global market has breached the £6,000/sq ft barrier. The £10,000/sq ft barrier will be breached at some point this decade. My view is that it won’t happen in Asia – the first market to break this barrier will be London.”