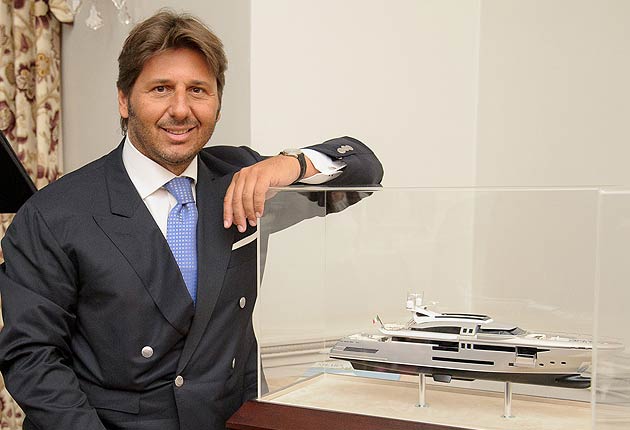 LM: Which CRN superyachts stand out the most for you during the last decade? Do you have any personal favourites?
LT: In the recent past, CRN has launched and delivered three megayachts, which is a very significant achievement for a superyacht company, which will ensure that we preserve Italy’s position as one of the world leaders in the industry.

If I look at the last ten years, design and product development has been characterised by constant passion and the research of innovative technical solutions which make life on board an enjoyable experience. For this reason, we continue to develop new features, such as the open stern and the balcony, which was launched in 2005 and can be enjoyed while sailing on M/Y 54m Ability. The open terrace overlooking the sea that has been integrated in the Owner’s suite on M/Y 54m Maraya and the ship’s pool, with the option of treadmill swimming thanks to an adjustable current as on board M/Y 57m Romance, were launched in 2008. Finally, we created a unique integrated beach club, which was implemented for the first time on the M/Y 60m Blue Eyes in 2009 and the previously mentioned floodable garage was developed for the first time in 2012, on the extraordinary M/Y 60m J’Ade. We constantly offer our clients the best cutting-edge solutions which are all available on the newest CRN vessels.

LM: What can we expect from CRN in the coming year?
LT: CRN aims to remain focused on two fundamental elements: the client and the product, whilst paying particular attention to the historical values of the brand such as tradition, properly mixed with innovation, reliability, design, customisation, craftsmanship and the most authentic “Made in Italy” design.

CRN is living and working in an intense period. At the moment, in our Ancona shipyard, four vessels of the CRN brand are being manufactured: namely four steel and aluminum megayachts – CRN 131 74m (designed by Zuccon International Project), CRN 132 73m (designed by Omega Architects), CRN 133 60 m (designed by Francesco Paszkowski Design) and CRN 134 55 m (designed by Nuvolari & Lenard).

The first one which was launched was the new 60m megayacht designed by Francesco Paszkowski in close collaboration with the CRN Technical Department. Two additional yachts are currently being manufactured in the Ancona shipyard, including a Ferretti Custom Line maxiyacht, the CL 124’, and a Riva 122’ Mythos, made of aluminum. Moreover we have just signed three new important letters of intent for the delivery of further yachts: two for the construction of two 44m megayachts, destined respectively to the Middle-Eastern and European markets, and one signed by an industrial client from mainland China for a 68m superyacht, the biggest vessel ever sold by CRN and Ferretti Group in China.

LM: And about you, what are the highlights for your career to date?
LT: I have been attracted by the yachting industry since I was a child. I decided to enter the boat industry in 1988, when I was 24 years old. It happened in Portofino, I was onboard the CRN M/Y 47m, Azzurra… later I realised it was a sign of fate! I believe this world is unique thanks to its ability to combine elements of exclusive charm: the sea and, therefore, the natural environment, man’s great skills and the idea of freedom. I became part of the yachting industry as an entrepreneur and professional in the 90s and together with Norberto Ferretti, in 1996, we created the brand “Custom Line”. My entire career has been closely devoted to the Ferretti Group and during the years I have always tracked CRN’s development.

When the opportunity came, I seized it: I proposed to Ferretti that they purchase CRN, the Doric shipyard, which was then finalised in 1999. A little later, I started working for the Ferretti Group at CRN, re-launching and reorganising it. I have been Chairman at CRN since May 2006, and I was appointed CEO in July 2012.

LM: Do you personally see every vessel before it is delivered to the customer?
LT: Certainly, I am personally interested in every vessel and the relationship with every owner, which is strengthened day-by-day, throughout all the building phases of their ships. We strongly believe in our relationships with clients to support them for the entire life of the boat and hopefully for new ones. For this reason, the ‘aftersales’ is one of the most important factors for us, because the relationship between CRN and the client is a long-lasting story.

LM: What would you include in a superyacht if you were commissioning one? A helicopter pad, jacuzzi, swimming pool, jet skis etc?
LT: This is a very important question. We build unique, fully customised yachts and I have often wondered what I would like if I were the owner and, honestly, this consideration has inspired many of the innovations on CRN yachts. As a lover of the sea and outdoors without any doubt, I would include the natural pool that can be used in absence of the tender, in the floodable garage, to create a space of great atmosphere to share with my family and friends.

LM: What are your favorite luxury destinations and properties?
LT: I am lucky, I always had the opportunity to travel a lot and I have visited spectacular places, but the place I like most, my favourite ‘luxury’ one, is my home.

LM: Thank you for your time Lamberto, and it has been a pleasure to speak to you.