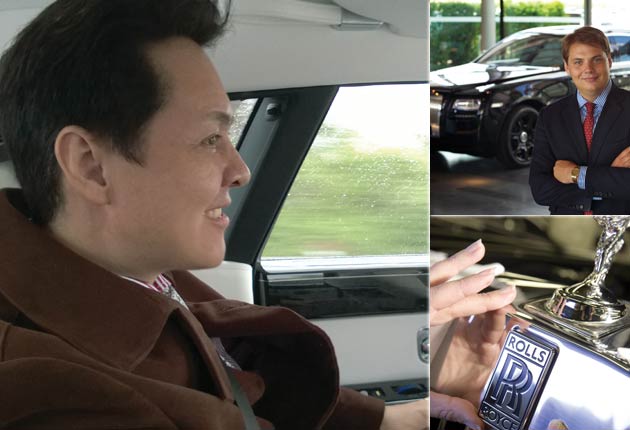 On his recent visit to the United Kingdom, Paul Godbold, the founder and owner of Luxurious Magazine enjoyed an extraordinary afternoon with Rolls-Royce Motor Cars at their Head Office in Goodwood, Chichester.

Paul has always been passionate about cars, having spent much of his twenties and thirties enjoying various high-end motor vehicles from various manufacturer’s including Porsche, Mercedes, Aston Martin, Audi and Jaguar. But, if you asked him directly what is the greatest luxury motoring brand in the world he would say without hesitation ‘Rolls-Royce’. So the opportunity for Paul to go to the actual home of Rolls-Royce was akin to Charlie Bucket going to the Chocolate Factory.

It is no secret that he holds the brand in such high esteem that until this visit he had never sat in a Rolls-Royce in his life, refusing all offers and always stating that it had to be a very special moment worthy of fulfilling a lifelong dream.

By pure coincidence, he also lived close to Goodwood for a large portion of his life and was even a member of Goodwood Golf and Country Club located almost adjacent to the factory, but like many of the local residents had not seen the head office buildings first hand due to the clever design implemented by renowned architect Sir Nicholas Grimshaw.

The remainder of this article will be in Paul’s own words:

As we drove through the gates I felt both excited and nervous, I knew what the head office looked like via the countless Rolls-Royce articles we had written over the years but when you see it in person, it is much more impressive. Not regal or ostentatious in its design, more serene and minimalist, blending perfectly with the green surroundings.

So here I was at the home of a brand that I have revered since childhood. As I wandered among the display cars in the vast reception I thought back to my early school days, playing motoring Top Trumps with my friends, reading out statistics and figures to win my opponents cards, and taking huge delight in finding that I had one card that no statistic needed to be read from, just the smug utterance of the worlds Rolls-Royce automatically meant that I had won the round, being here brought back that very same feeling.

After signing the visitor’s book we were met by James Warren, Communications Manager for the UK and Scandinavia who greeted us with a huge smile and led us to the Library where we could sit down and take in the more of the buildings extraordinary design elements and some refreshments. Suitably replenished, we ventured into the high-tech assembly facilities and spent the next couple of hours on a one-on-one tour hosted by a very knowledgeable gentleman by the name of David. A man with possibly a greater affection for the brand than even I had and certainly a more extensive knowledge of the brands’ history. David provided some wonderful anecdotes and snippets of information that elicited a ‘wow‘ response from me time and time again.

There are far too many aspects of the build process and newly obtained information about the brand for me to condense into a relatively small amount of words, suffice to say that once you witness the build process of a Rolls-Royce motor car, and understand why things are done is such a precise and intensive way, it is easy to justify both the vehicle pricing and why it has obtained its position as one of the world’s ultimate status symbols.

I thoroughly enjoyed every aspect of the tour and the amazing opportunity to go behind the scenes witnessing the attention to detail that goes into every vehicle. However, we still had one dream to fulfil, me getting into a Rolls-Royce and up to this time, I had absolutely no idea what car it was going to be.

Back at the library, James looked at me with a grin knowing that he had something special in store, and yes it was to be what I always wanted, a car that would eminently suitable for this special occasion.

The car I was given to drive would be none other than the official company Phantom of Mr Torsten Müller-Ötvös, Chief Executive of Rolls-Royce Motor Cars. A rare honour and one that had me once again both nervous and excited.

Find out what the experience was like driving the world’s greatest luxury motor car in part two of the Rolls-Royce Goodwood feature that will follow shortly.