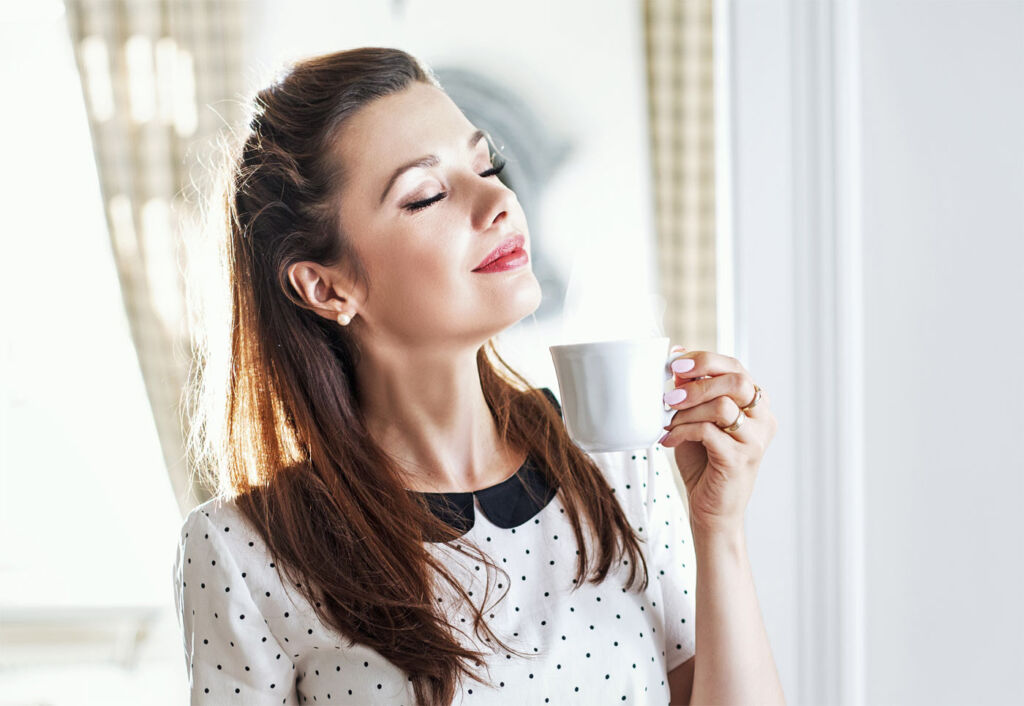 Each day 165 million cups of tea are drunk in the UK. That’s far more than coffee!

Research by National Tea Day shows that Specialty teas are being consumed more than ever before with an annual increase of 80% in health teas alone. The major factor is that consumers are demanding more choice and higher quality teas; the biggest growth is by 25-34-year-old females, who are responsible for a 69% growth in tea sales in that age group. This shows tea isn’t declining; it is evolving into a flavoursome and high-quality experience.

Anytime is a good time for tea. Not only has tea been linked to a multitude of health benefits, but we also find ourselves having a tea-moment to soothe our minds from the stresses and strains of everyday life. This is not just a coincidence; in fact, studies have shown that a single cup of tea can significantly reduce anxiety levels after suffering a stressful experience, providing a calming effect for the individual concerned.

The study, by psychologist Dr Malcolm Cross at City University London, showed what millions of tea-drinkers have long believed – that if you are upset or anxious, it pays to brew a cuppa.

The experiment at the centre of the study placed volunteers in stressful scenarios and showed a 25 per cent increase in anxiety levels in volunteers who did not consume tea immediately after the stress-inducing event. Also, those who were given tea actually demonstrated a drop of 4 per cent in stress levels.

What makes tea special is the high levels of polyphenols it contains. These are the natural compounds extracted from tea leaves. These powerful antioxidants have shown a number of beneficial properties – such as reducing the risks of cancer and heart disease, alleviating cognitive impairment and showing antidepressant-like activity.

In addition to the soothing qualities of the tea itself, the psychologist discovered that the act of putting the kettle on also helped by tapping into a collective conscious and symbolism. Further psychological tests and focus groups conducted after the experiment showed that tea’s calming benefits aren’t just a question of biochemistry – but also a matter of its ‘Britishness’.

Psychologist Dr Malcolm Cross, of City University London, said: “The ritual of making and drinking tea – particularly during times of stress – is at the very core of British culture.

“This study shows that the social-psychological aspects of tea enhance the effects of its chemical make-up on our bodies and brains. It’s possible that this culturally rooted, symbiotic function between mind and body explains why Britons instinctively turn to tea in times of need.

“Put simply; the findings illustrate what most mothers would tell us: if you’re stressed, anxious, or just feeling blue, make yourself a nice calming brew.” 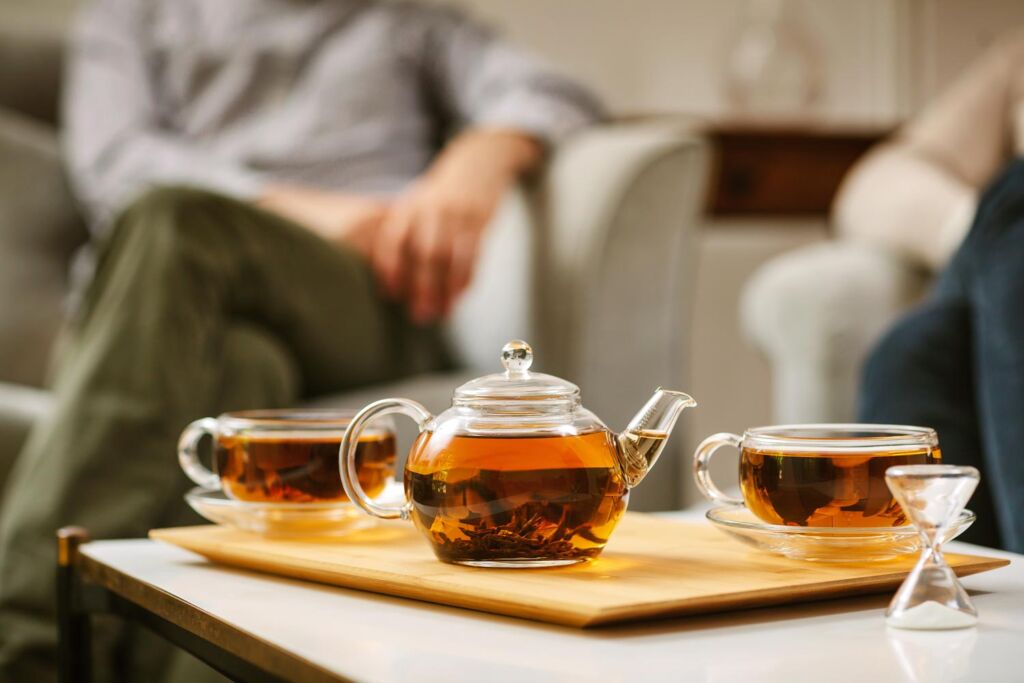 Not all cups are made equal.

All five of our senses contribute to the enjoyment of a cup of tea. While the sight and even the thought of food are important to our perception of flavour, the first direct physical contact we have with the actual tea molecules is through smell. Most importantly, serving tea in the right cup can dramatically enhance its taste, as 90% of what we perceive as taste, is actually smell.

Teas, and of course other beverages and foods, release volatile molecules into the air which we then breathe in. These molecules pass by receptors in the roof of the nose, the olfactory patch, to which they may attach. With attachment, this patch sends signals to our brain, which we interpret as smell, and attribute to our nose. This process is called orthonasal olfaction.

Once the tea is in our mouth, more volatile molecules are released – in fact with a cooler tea, even more, volatiles can emerge due to the warmth of the mouth, which is why we are able to perceive more subtle notes in tea when cooler.

To get a true sense of what this means, imagine drinking the best tea you have ever had, served in a styrofoam cup. Your experience of the tea will be extremely bland because styrofoam absorbs flavour molecules, hence reducing the tastiness of the tea.

There is a scientific reason why fine bone china was reserved for the very best tea occasions. Every aspect is taken into account, from the weight of a fine bone china teacup and how it feels against your lips, to the crystal clear sound, it makes as the tea is poured. Fine bone china teacups are better than glass cups for tasting, even on a microscopic level, as their glazed surfaces have tiny bumps and dents.

These imperfections mean that the tea has to bump into and rub up against many micro-sized obstacles on the journey from inside the cup to your mouth. As the tea travels over these tiny imperfections, the liquid tears apart and opens up. If you imagine, it is very similar to waves crashing into rocks, where the water sprays everywhere and foams up into whitecaps.

The difference being that instead of ocean water, it is the smell and flavour crashing into and opening up against the ceramic walls of your teacup, giving you a slightly more open sensory experience than you would have with a glass teacup.

Lastly, the colour of the cup also plays a significant role in the psychology of taste. Choose a red cup instead of white one when drinking tea; research shows we associate colours with taste and red suggests sweetness and brightness.

Water is one of the biggest factors which affects your perception of tea flavour. Oxygen is key to drawing the flavour out of your tea, and oxygen molecules are lost when water is boiled each time. In addition, filtering hard water with a leading water filter such as ZeroWater which helps remove calcium and magnesium, which are responsible for the layer of scum commonly seen.

These minerals react with flavour compounds, consequently reducing the tea’s taste. Hence, brewing tea with freshly drawn filtered water is one of the golden rules of tea making. 98% of a cup of tea is the water, so help give tea the water it deserves, ZeroWater also removes 99.6% of all dissolved solids and toxins, such as lead, chlorine and mercury.

Taste sensations, including bitter sensations, come to us primarily through taste buds. While there are individual taste buds on the roof of the mouth, the back of the throat, and down the oesophagus, the majority of taste buds are located on the tongue. A taste bud consists of a cluster of at least five different types of cells, along with two nerve endings, one from a taste nerve and one from the trigeminal nerve. How we know something is bitter, umami or sweet depends on tiny receptors on the nerve cells that grab chemicals in the tea moving through your mouth as you sip.

Once the chemicals attach to its matching receptor, just like a lock and key, the receptor changes shape and ‘unlocks’ ion channels, changing the cell’s chemistry. The change releases signal compounds, which bring the appropriate message to other neighbouring cells and nerve endings.

Why is Green Tea Bitter?

There are at least three kinds of bitter compounds in green tea: quercetin, caffeine, and catechins.

Quercetin is found in a host of different plants and is indestructible even through the processing of tea leaves. However, it is not soluble in water, so very little is extracted from the leaf when brewed and will therefore not contribute to the bitterness.

Caffeine is bitter, and is extracted from the leaf – the longer the steep, the greater the amount of caffeine in the tea. While there may be less caffeine overall in green tea, in black tea, the caffeine is bound up into large polyphenols, making the tea less bitter.

With respect to catechins, remember that green tea is not intensely processed. This means that the catechins that were stored in the leaf don’t have much of a chance to form the large complex molecules, theaflavins and thearubigens, which you find in black teas – these chemicals are more astringent than bitter. Therefore, the colour of green tea in the cup stays pale yellow, and the bitterness of the catechins remains. How bitter? It depends on the tea, the steeping temperature, the steeping time, and the type of tea.

However, remember that tea contains powerful antioxidants, and steeping time increases the release of antioxidants and caffeine. So when infusing tea, whether it’s loose or in a tea bag, the longer the steep, the more molecules are released, ensuring you get the most health benefits out of your tea.

Hot versus cold-brewed teas / Why are cold brews less bitter?

Lately, cold-brewed teas have been gaining in popularity in the UK. With respect to green teas, cold-brewing, especially for about an hour in ice-cold water, will bring out the amino acids (which are sweeter) in the brew, while fewer catechins will be extracted. The result is a sweeter, less bitter cup.