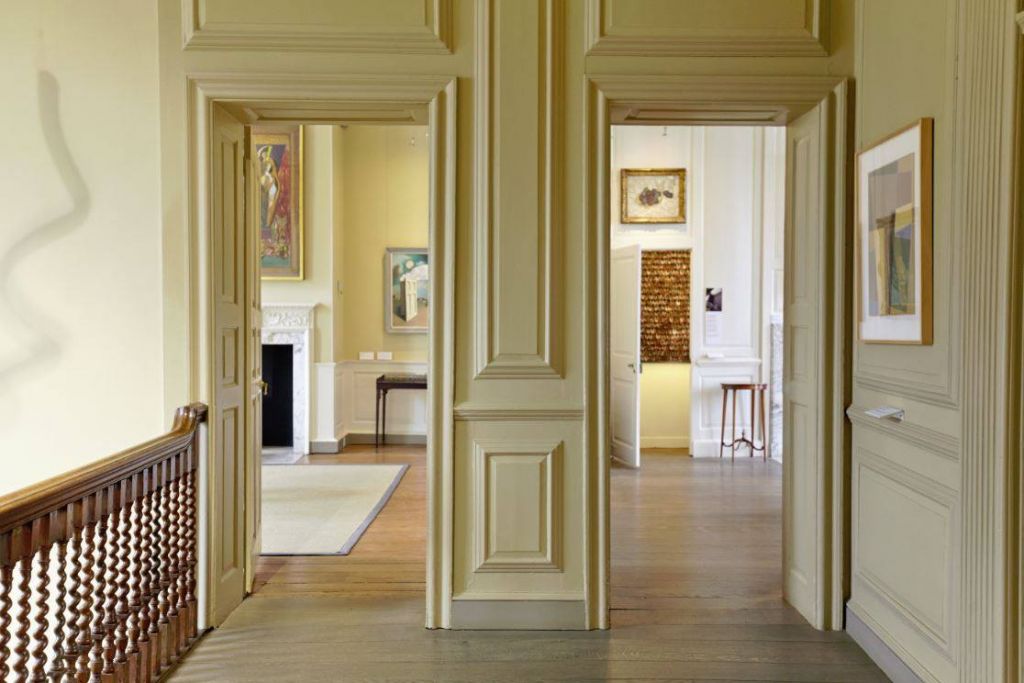 Pallant House Gallery has acquired Pop artist Peter Blake’s Boy with Paintings which contains a hidden Valentine’s Message. It will go on display between 15 February and 7 June 2020.

A revealing early self-portrait by British Pop artist Sir Peter Blake featuring a Valentine’s message for his fellow student Pauline Boty has been acquired for the nation through the Acceptance in Lieu Scheme, which is administered by the Arts Council, and allocated to Pallant House Gallery.

Boy with Paintings comes from the collection of Muriel Wilson, a significant figure in the British art world, who recently bequeathed over 40 works to the Gallery. Highlights from her collection, including works by Manet, David Hockney, Eduardo Paolozzi, and Richard Hamilton will go on display between 15 February and 7 June 2020 in ‘A Life in Art: The Muriel Wilson Bequest’.

Sir Peter Blake (b.1932) is an institution of postwar British art. From a Brit Award statuette to albums by the Who and Band Aid’s Do They Know It’s Christmas?; he has had a major role in British cultural life for decades.

Boy with Paintings bears a strong resemblance to Blake’s earlier magnum opus, On the Balcony, (1955-57), which features similar content, themes, and is done in the same style. It is a double self-portrait, featuring a young Blake in the background, and a more mature Blake in the foreground, though still dressed as a boy.

The figure in the background holds a large Valentine’s Day card, an autobiographical reference to a card Blake created for a fellow student, Pauline Boty. She was one of the founders of the British Pop art movement and the only female painter in the British wing of the movement.

Blake’s feelings were, however unrequited, a fact reflected in tears springing from the main figure’s eyes. The artist has gone on to be known for his works featuring love hearts, including his collage LOVE (2007), which was given to the Gallery by Frank and Lorna Dunphy in 2018, under the Cultural Gifts Scheme. Boy with Paintings will become the earliest of the 18 works by Blake housed at Pallant House Gallery, representing an important acquisition of his earliest mature work.

Simon Martin, Director, Pallant House Gallery, said: “We are thrilled to acquire such an important and poignant painting by Peter Blake for Pallant House Gallery’s remarkable Pop Art collection. Muriel Wilson was a key figure in the British art world, who was much admired by the artists whose careers she supported. Her bequest of modern and contemporary artworks by celebrated artists such as Michael Andrews, David Hockney, Eduardo Paolozzi and Richard Hamilton reunites significant works that she acquired in the 1950s and ’60s with the collection donated by her former husband Prof Sir Colin St John Wilson, truly demonstrating how we are a ‘collection of collections.”

The painting comes to the Gallery at the same time as the Muriel Wilson Bequest. It reunites her collection with that of her ex-husband Prof Sir Colin St John (‘Sandy’) Wilson, the architect of the British Library and Pallant House Gallery’s contemporary wing, who with his second wife MJ Long, donated his Pop Art collection in 2006 through The Art Fund.

The daughter of the Welsh artist Alfred Lavender, Muriel Wilson studied at the Courtauld Institute of Art from 1951-54 and married Wilson in 1955. She later worked at the Institute of Contemporary Arts, where she became involved with the group of artists, architects and critics known as’ The Independent Group’ (including her husband Sandy) and she worked on their seminal 1956 exhibition ‘This Is Tomorrow’ at the Whitechapel Art Gallery, which set out a new vision of contemporary art in Britain.

In 1956, Wilson moved to Cambridge where she ran the Arts Council Gallery, organising early shows of artists such as Eduardo Paolozzi and Nigel Henderson, which helped to place both artists firmly on the art world map. Here, she was an early mentor to the likes of the young Nicholas Serota, then a student at the University. Following her divorce in 1971, Wilson became Curator of the British Council and eventually its Director of Visual Arts. She introduced many important overseas artists to UK audiences, including Anish Kapoor, and was committed to the promotion of the work of British artists abroad, including taking Richard Long to the Venice Biennale in 1976.

The Muriel Wilson Bequest includes etchings and wood-cuts by Édouard Manet, Walter Sickert, and William Nicholson; Pop prints by Derek Boshier, Eduardo Paolozzi, Richard Hamilton, and a group of lithographs by David Hockney, including a portrait of his muse Celia Birtwell. Also included are an early collage by the American artist Leon Golub; and other limited editions by contemporary artists: Richard Long; Tess Jaray; Marc Camille Chaimowicz and Laura Ford.

Pallant House Gallery is known for its ‘collection of collections’ which tells not only the story of Modern British art but also the story of individual collectors and their interests and tastes. Muriel Wilson’s collection joins that of other female collectors at the Gallery, including criminal psychologist Elizabeth Burney; Claire Neilson the patron of Paul Nash; and the textile designers Enid Marx, and EQ Nicholson. By continuing to acquire collections amassed by women, the Gallery aims to redress historical imbalances and tell the wider story of 20th-century art in Britain, including the stories of collectors.

A Life in Art: The Muriel Wilson Collection opens on Saturday 15 February and continues until Sunday 7 June.