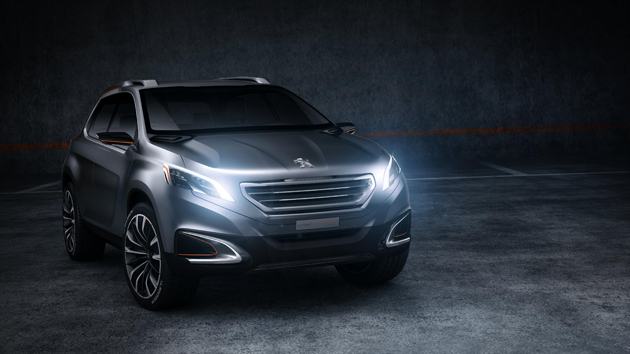 The Peugeot Urban Crossover Concept has been unveiled at the Beijing Motor Show further illustrating the global perspective of the brand.

Elegant and cheeky, refined and charismatic, sporty and seductive, with the Urban Crossover Concept, Peugeot offers a new vision of a compact Crossover that is modern and dynamic.

Cities are changing, mobility as well
From Sao Paulo to Shanghai, from London to Kuala Lumpur, from Cape Town to Moscow, the city lives, changes, grows. Humanity becomes more and more urban, at a rate not seen before. A new generation of city dwellers is being born. For them, the international teams from Style Peugeot in Paris, Shanghai and Sao Paulo have created a new type of vehicle, the Urban Crossover Concept. Urban by its compact design (with a length of 4.14m and a width of 1.74m), and adventurous by its athletic and sleek style, conferring on it an extraordinary and universal power of seduction. Crossover – a vehicle that mixes the elegance and refinement of a saloon, the cheekiness and the mischievousness of an SUV with multi-role capability and unusual spaciousness for this market segment.

A reflection on the Crossover in the B segment, which draws on considerable expertise in production and concept cars
With its great heritage in small cars (15 million units produced in the 200 series for example) and recent achievements in the Crossover segment with the success of 3008 – 368,000 units of which have been sold in the world to date), Peugeot wanted to develop this success further to create something that merged these two areas of excellence into a concept car. The Urban Crossover Concept is the combination of Peugeot’s know-how in creating a small vehicle combining agility, compactness, multi-role ability and confident styling for young city dwellers that like the city, live the city, create the city, while still loving to escape from it. 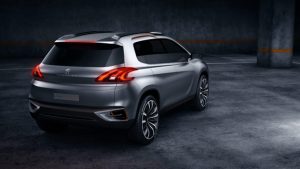 Urban Crossover Concept naturally embodies Peugeot’s new styling cues. With its athletic and classy lines, Urban Crossover Concept reinvents the standards of large vehicles for the small vehicle segment. The front end is at the same time refined and full of power. Models that are sensual and with a highly sculpted bonnet or front wings give a reassuring impression of protection and robustness. The ‘smiling’ grille, always floating, offers a massive outline, shaped in metal. It is associated with a sophisticated dual-aspect treatment of the image of Peugeot’s new badge.

In profile, the smooth flow between the raked windscreen and the line of the roof continues to the spoiler, creating a profiled and very dynamic outline.  The lines of the side, laid out in the direction of the road are evocative of a car that is lively, classy and very dynamic. The raised body and large wheels reveal the true multi-role qualities for family or working life, while also contributing to a car that is light and respectful of its environment. At the rear, the dynamic design allows for the lamps to be embedded with precision into the body, presenting a luminous Peugeot signature with 3 floating claws using LED technology. Finally, the aluminium spoiler and roof double bubble are reminiscent of the sporty and elegant aspect of the RCZ Sports Coupé. Urban Crossover Concept transcends borders. The borders of vehicle style and segmentation. The borders of the needs of future generations of customers. The borders between the city and nature. The borders between continents.

Urban Crossover Concept will make its European debut at the Paris Motor Show in September 2012.