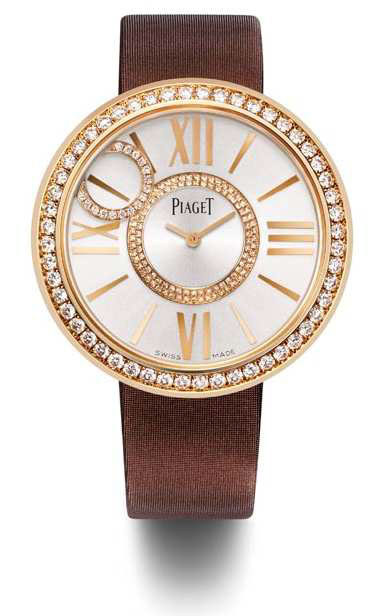 Loyal to its creative and audacious spirit, Piaget has chosen once again to highlight its creator’s talent and heritage in its feminine and concept watches with the new Limelight Dancing Light watch models. A dial imparts the rhythm and orchestrates a brilliantly talented pas de deux between watchmaking and jewellery, majestically arranged in a round case adorned with diamonds.

Encouraged by the ever-growing success of its creations, Piaget has always known how to give style to its feminine creations: secret watches, cuffs and sautoirs. The brand subsequently introduced collections expressing its inimitably inventive DNA. This creative heritage was epitomised in the Limelight Magic Hour and Limelight Twice watches respectively launched in 2007 and 2009 and have become the iconic feminine watches of the brand.

In 2010, the Limelight Dancing Light watch set a new tempo for the collection, as Piaget presented an authentic concept case, in which a refined gem-set motif swept endlessly around the dial. This playful design offered an original and daring interpretation of the cherished thematic movement theme.

With the Limelight Dancing Light watch Collection, Piaget highlights one of its essential historical design codes: creative magic. The brand has successfully captured the ephemeral beauty of an arabesque or a feather-light flight through the air, and encapsulated it within a graceful wrist adornment.