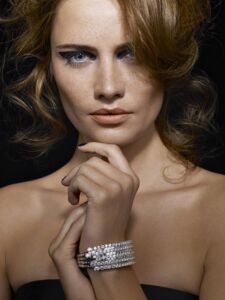 Three exceptional creations symbolising unique watchmaking and jewellery expertise
Piaget introduces three exceptional watches in its Limelight collection. These remarkable models, graced with extravagant femininity and refinement, are an eloquent reminder of Piaget’s supreme mastery of the watchmaking expertise cultivated by its Manufacture in La Côte-aux-Fées, and of the jewellery know-how exercised in its Manufacture in Geneva.

During the almost a century and a half that have taken it from La Côte-aux-Fées workshop set up by Georges-Edouard Piaget in 1874 to its current status as an international luxury brand, Piaget has successfully developed a two-fold expertise in the fields of watchmaking and jewellery. Now firmly established in two sites – La Côte-aux-Fées (Neuchâtel Jura region) and Plan-les-Ouates (Geneva) – that have each made a speciality of one of these two areas of know-how, the Manufacture de Haute Horlogerie Piaget proudly presents three exclusive timepieces that bear vivid testimony to its associated skills. Of these three Haute Joaillerie watches, two are original creations, and the third is a spectacularly gem-set selfwinding chronograph.

The first might easily pass for a jewellery bracelet if one omitted to mention that an extremely discreet timepiece is concealed inside. This “secret” watch featuring alternating lines of baguette- and brilliant-cut diamonds, with each of the lines tipped with a pear-cut diamond, is entirely gem-set in Piaget’s Geneva workshops. Its clever mechanism enables it to reveal the mobile case at a press of the finger. Once the time has been read off, it disappears as if by magic beneath the 43 carats of diamonds adorning the bracelet.

The second is a nod to the world of haute couture, since the Piaget designers have made it look like a zip that has been unintentionally – or deliberately –left open to reveal a delicate cleavage or a tantalizing glimpse of skin. Thanks to the remarkable closed setting work on the baguette-cut diamonds, the illusion created by the clever mix with more than one thousand brilliant-cut diamonds and trapeze-shaped black spinels is almost perfect. While the baguette-cut diamonds are set on the watch case, the true technical feat consisted in designing the latter in such a way as to position the stones not next to, but instead on the sapphire crystal itself, thus ensuring genuine continuity between the case 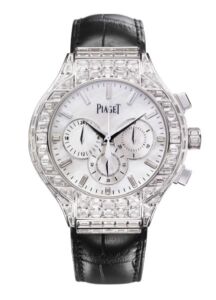 and dial that creates a stunning optical effect. The result is a masterpiece of Haute Joaillerie graced with sensual curves that took the Piaget master-jewellers 140 hours to set.

The third and last model also brilliantly embodies the best of two worlds according to Piaget: Haute Horlogerie and Haute Joaillerie. Equipped with self-winding Calibre 881P, developed, crafted by Piaget with horological traditions, it displays the hours, minutes, small seconds, dual time-zone as well as the flyback chronograph function. Refinement is taken to extremes with the gem-set oscillating weight. As beautiful on the outside as it is inside, its 18-carat white gold case is enhanced by 700 diamonds including 94 baguettecut stones of 36 different sizes, all selected and calibrated by the Piaget Master Jewellers in order to ensure they adapt perfectly to the shape. Fitted with a mother-of-pearl dial, this model is also adorned with a gemset case-back. This exceptional watch is both a resolutely Haute Horlogerie model and a stunning display of jewellery-making creativity.